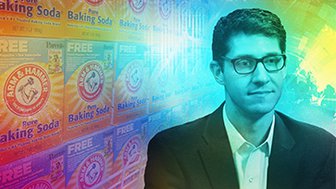 Steve Strazza, co-founder of The Chart Report, makes his debut…

Douglas Busch, CMT, founder of Chartsmarter.com, sits down to discuss why he's bullish on Cisco Systems & bearish on Citrix Systems. He reviews his thoughts on the broader stock market, analyzes the technicals for these two names, and highlights the key levels in this interview with Jake Merl. Filmed on April 1, 2019.

JAKE MERL: Welcome to Trade Ideas. I'm Jake Merl, sitting down with Doug Busch of Chartsmarter.com. Doug, great to have you back on the show.

DOUG BUSCH: Thanks, as always, for having me.

DOUG BUSCH: Well, you know, to be frank, let's give credit where it's due. Every major S&P sector is higher by at least 6% year to date. And that's an excellent sign. But there are a couple concerning things I'm seeing.

Number one is Apple. The stock is 19% off its most recent 52 week highs. And it's trading just underneath its 200-day moving average.

That stock is actually the NASDAQ's largest component. So it's basically a proxy for the market. So if that stock can actually break above that 200-day moving average, I'd be a little more positive.

Secondly, I was taking a look at the ratio chart comparing the Russell 2000 to the NASDAQ. That took a dip in the month of March. And that's a little concerning, because small caps are often seen as leading indicators. This small cap benchmark is also just below its 200-day moving average.

All that being said, the Russell is still higher by more than 14% year to date. It's trading around 15 and 1,600 numbers the last month. And a break above 1,600 would qualify as a break above a bullish inverse head and shoulders pattern.

JAKE MERL: So right now, are you bullish, bearish, standing on the sidelines?

JAKE MERL: So with that in mind, what are the stocks we're looking at today? You're recommending both a long and a short idea. Is that right?

DOUG BUSCH: Correct. Correct. I'm recommending a pair trade within technology, both old tech names. The first one is Cisco. Doesn't really need an introduction. It's higher by 24% year to date, sports a nice dividend yield of 2.6%. It's trading at 18-year highs.

It's up 11 of the last 14 weeks. In the three declining weeks, lost less than 1%. So that's a good sign. It's trading well. Post breakout from a 49.24 double-bottom trigger that it took out on February 15. And we know the best breakouts tend to work right away.

The chart trades in a very taut fashion, hallmark bullish traits. A flagpole there began at the round 40 number late last December. I want you to enter with a buy stop above a bull flag trigger of $54.25. A breakout carries a measured move to $69. And use a stop of $52.

JAKE MERL: So I know the charts look good. The technicals look good. But it's trading at 18-year highs. I mean, that doesn't worry you?

DOUG BUSCH: Not at all. I mean, I like to buy stocks on the upper right and buy high and sell higher. I know the axiom is buy low, sell high. I'm a relative strength guy. The trend is like we say. They're more likely to persist than they are to reverse. Sit on your hands, that's how you make the most amount of money.

JAKE MERL: And you have a time horizon for this trade?

DOUG BUSCH: Not really. You know, Cisco is more of a-- you know, I wouldn't call it a defensive play. It's a more mature play. So maybe you could call it a supertanker. It's hard to move this thing one way or another. But the trend is definitely higher. It's going so in a gradual fashion, which I like a lot.

JAKE MERL: Are you looking at any of the fundamentals or just the technical?

JAKE MERL: And so moving on to your next trade, the short idea. What are we looking at?

DOUG BUSCH: Another old tech play. This is Citrix Systems, CTXS. It's actually lower 3% year to date, as this market has just skyrocketed. It's also underperforming a very strong overall software sector, obvious relative weakness. So last week, the stock lost almost 1% as the IGV, the software ETF, rose 1.2%.

And believe it or not, it's now below the lows it made late last December, where we saw this ramp. It's lost ground three of the last four weeks. And most importantly, all four of those weeks closed very tight within $1.22 of each other. And when we see breakdowns from that type of action, the moves tend to be explosive.

The round number theory-- I'm a big proponent of it-- round number theory came into play last week. It was just the second weekly close below 100 in the last 11 months. I want you to enter this idea with a sell stop below a bearish descending triangle trigger of $99. A breakdown gives you a measured move to $81. And I'd use a buy stop of $102.25.

JAKE MERL: And so, Doug, what about the fundamentals for this trade? Are you looking at any of that, or is it purely just based on the technicals?

DOUG BUSCH: No time horizon. Just let it work. If the stock breaks out, or in this case breaks down, as long as a catalyst still exists, stay in the trade.

JAKE MERL: So what are the biggest risks to both of these trades? Is it simply just looking at the price action and, you know, stop loss?

JAKE MERL: Well, Doug, it was great to have you back on the show.

DOUG BUSCH: Thanks so much, Jake.

And that was Doug Busch of Chartsmarter.com. And for Real Vision, I'm Jake Merl.