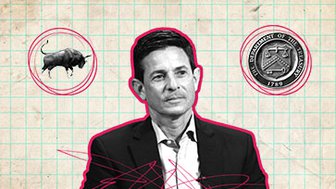 Joe Perry, CMT, of ForexAnalytix, has been bullish on the U.S. dollar throughout the past year, but has recently altered his stance to take advantage of the coming short-term down move in the dollar. He considers the macro backdrop, analyzes the technical setup for why the dollar should weaken, and discusses how to make the trade using the euro, in this interview with Jake Merl. Filmed on June 6, 2019.

JAKE MERL: Welcome to Trade Ideas. I'm Jake Merl, sitting down with Joe Perry, global head of business development at ForexAnalytix and former FX and futures trader at Point72. Joe, great to have you back on the show.

JAKE MERL: So today when we talking about the US dollar. And you've been a bull for quite some time. You've actually recommended shorting some currencies against the US dollar over the past six months. But yesterday you reached out to me and you're actually changing your tone. You're flipping from dollar bull to a dollar bear. What exactly are you looking at that suggests it's a good time to go short the dollar?

JOE PERRY: OK, so this is a short-term trade. And in the long-term, I'm still bullish on the dollar. However, right now I see a setup that makes me want to go short the dollar. So let's first take a step back and look at a high level, just macro overview. The Fed last year in December, they were on a tightening path and unwinding the balance sheet. And all of a sudden in December, they changed their tune. Why? Probably because the stock market was coming off as much as it was. That gave market participants the signal that they should be buying equities. The Fed gave them the OK.

JOE PERRY: To buy equities. So what happened first quarter, we had a 25% rally. And that brings us up to where we are now. Now all of a sudden, the Fed has become more dovish, right? And as they've become more dovish, this dollar has begun to trickle lower. The stock market has been coming off. And now as we've been coming off in the stock market, kind of as we were in December, only not to the same extent. I think they're trying to avoid another round of selling like we had in the fourth quarter last year, because nobody wants to go through that again.

So they're stepping in now. We just had Powell come out, and he said the Fed will act as appropriate to sustain expansion. So the Fed president coming out and saying that, it's saying they're going to do whatever they have to do. Which may be another signal for the stocks to go higher. But in doing so, the dollar now could turn lower.

JAKE MERL: So you're saying the dollar weaken here in the short term, and also due to the Fed commentary. What are you looking at from a technical perspective that also confirms this view?

JOE PERRY: So if we look at the dollar index, I have been bullish, as we have been for the last year or so, we've been putting in a rising triangle formation. And we tested that $98 level on the dollar index a number of times, and we just couldn't break through it. Finally, we broke through it, and we pulled back right away. Maybe a week or so later, we did it again, and we came right back.

So now we broke out twice, two failed breakouts, and on those failed breakouts, we put in the double top. So the dollar started trading lower and we just broke the neckline, which in my opinion now, means that we could extend to the downside from that double top formation.

JAKE MERL: Can you please break down that double top pattern a little bit more for us? Because you said it hit the top a couple of weeks ago, but you didn't get the signal until yesterday or so. Can you explain that a little more?

JOE PERRY: Sure. So we put a double top in at $98. Price got up there, couldn't push through it, came back down. Well in between there, we made a low, and we went back down and we retested that low. So that acts as the neckline. And in order to determine the target from that double top, you take the width of the top and the price action in between the two tops, and you add it to the bottom, which is $97, the breakout. And now that looks like it could extend down to around $95 or so.

JAKE MERL: So in addition to the double top, are there any other technicals you're looking at?

JOE PERRY: Well, yes. In addition to the double top, I'm looking at the $97 level, which is that neckline. So that is an important level for a number of reasons. It is also horizontal support going back a number of months. It's the 38% retracement from the 2019 low up to the recent highs. And just below that, we have a one-year trend line coming in, which I think I'm looking for a close below 97 to actually push lower and break through that trend line.

So those are a lot of things. We do have non-farm payroll tomorrow, so we're sitting right around that $97 level. That may give some guidance as to which way we go from here. But unless it comes in really bad, the ADP numbers yesterday were pretty bad, but I don't think it's going to have much of effect. I think it's more of this Fed speak that's going to bring it lower.

JAKE MERL: So we've mostly been talking about the dollar index, DXY.

JAKE MERL: But are you looking at any other currencies out there that's confirming your view?

JOE PERRY: Yes. You know, the dollar's just breaking through $97 now. If you look at some other dollar currency pairs, you could see that there has been some price action where the dollar has already broken down. So if you look at dollar, yen, for example, it's looking to break below the support of a multi-year symmetrical triangle and break below $107.60, which is also the 0.618 fib level. That would confirm that the dollar is going to continue lower against the yen.

Dollar, Swiss, we are testing a trend line of support from an 18-month ascending wedge. Close below 99 would signal the dollar Swiss is going to move lower. We're right at that trend line right now. And New Zealand two weeks ago, the kiwi already made its move higher against the dollar. And that was the first one to begin making its move, breaking out the descending wedge.

JAKE MERL: So with all that in mind, Joe, which currency would you actually use to make your play on the dollar?

Now having said that, we have been a descending triangle formation going back to September of last year. And we just started to break out. It's another currency pair now that is confirming the euro higher, dollar lower, right? So now we have another currency we could add to that. And it's right around $113 right now, the euro versus the dollar.

The ECB came out this morning and they were actually a little bit more hawkish as people were expecting them to be dovish. And they actually said that they see rates at present levels at least through the first half of 2020. So they extended that out about six months. People were looking that as, to be a little more hawkish.

However, as usual, he does say something during the question and answer session that reverses what the statement says. And he did say some officials raised the possibility of cuts. So we had euro straight higher out of the range, and now we're back to that $113 level and we're trading right about there right now. From an early wave perspective now, as we traded lower down to the bottom of that descending wedge, that was actually completion of a wave five. So now we're trading higher. We're looking for a wave, A, to unfold in five waves and then move higher from there.

JAKE MERL: And so as you mentioned, the euro has strengthened over the past few days. Would you be looking to get involved now at current levels?

JOE PERRY: Yes, so we are breaking out of the descending triangle. So I think a close above $113 is a good level to get into the trade, which conversely with the dollar Index, would probably mean that we are a close, we are closing below $97. So a close below $97 on the downside would also signal an entry to buy euros.

JAKE MERL: And what's your target on the upside for the euro?

JAKE MERL: And over what time horizon you expect this thesis to play out?

JOE PERRY: So I think if it does break out like this or we do get a close above $113, I think we're going to move pretty quickly. I think it's going to be more of the dollar moving lower quickly, so the euro will go higher quickly. And I think it'll be a couple weeks, but I'm going to say within a month, to give myself some leeway there.

JAKE MERL: So what would you say is the biggest risk to this trade?

JOE PERRY: The biggest risk, we have payrolls coming out that could be a factor. We could have more Fed speakers coming out that could just change the tune from their dovish tone. We do have the G20 coming up, so possibly something out of there could strengthen the dollar. I think it's going to be more of a macro reason than a technical reason. And that would change the view.

JOE PERRY: Thanks, always good to be here.

JAKE MERL: So Joe is bearish on the US dollar. Specifically, he likes buying the euro on a daily close of $113 with a stop loss at $112.50 and a target of $115.50 over the next month. That was Joe Perry of ForexAnalytix. And for Real Vision I'm Jake Merl.