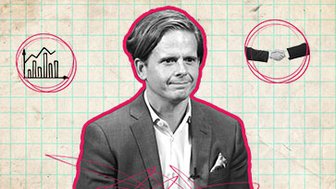 John Jannarone, editor in chief of IPO Edge, revisits his…

Dan Russo, CMT, chief market strategist at Chaikin Analytics, is taking a bullish stance on aerospace and defense despite Boeing’s worst quarterly loss in history. He analyzes other stocks within the industry, and highlights the current opportunity in two manufacturing companies, Hexcel and Arconic. In this interview with Jake Merl, Dan breaks down the 20-factor Chaikin model and reviews why these two stocks look poised to outperform. Filmed on July 26, 2019.

JAKE MERL: Welcome to Trade Ideas. I'm Jake Merl, sitting down with Dan Russo of Chaikin Analytics. Dan, great to have you back on the show.

DAN RUSSO: Thanks for having me, Jake. It's great to be back.

DAN RUSSO: I think it's important to look beyond just the one-stop. Aerospace and defense is a broad group. Boeing is a large weight within that group. But if you look at the ETFs that represents the aerospace and defense industry, the ITA, the iShares Aerospace and Defense ETF, there are a lot more stocks in there than just Boeing. And at Chaikin Analytics, we have a 20-factor model for rating stocks, the ratings run from very bullish to very bearish. And what we can do every day is look within a market- based ETF like the SPY or the Qs, or the different industry ETFs, like ITA for aerospace and defense and get a sense for what the fundamentals look like across the board within the ETF.

And if you look at ITA coming into today, there were 20 bullish or very bullish stocks that are holdings of that ETF and only three bearish or very bearish stocks. So what that tells me is that away from Boeing, the aerospace and defense industry group is actually doing pretty well. And because our model is forward looking, the outperformance away from Boeing is likely to continue. And even with that big weight, I think it's 20%, 22% of the ITA. On a relative basis, that fund is actually just beginning to start to outperform the SPY. So it's starting to outperform the market.

And if you look at aerospace and defense on an equally weighted basis, look at the XAR ETF, which is an equal weight aerospace and defense ETF, it's actually been a really big outperformer across timeframes or whether you look at three months, six months, or 12 months, it does have positive momentum outperforming the broader market. And when you combine that with the bullish fundamentals within our model, it does set up some compelling opportunities if you're willing to turn the headlines off and look beyond the one name within the group.

JAKE MERL: So would you specifically be looking to buy ITA here? Or do you suggest another way to play this setup?

DAN RUSSO: I think there's another way to play this setup. We do have to take into account the fact that Boeing is such a large weight. So I don't think it makes sense to go out and own that particular ETF. What I think you want to do is drill down on the holdings within the ETF and look for some good opportunities. And there were two actually that I think make a lot of sense right now.

One of them is Hexcel, the ticker symbol is HXL. And within our model, it has a bullish rating. And what's interesting to me is they just reported earnings, positive earnings surprise, and analysts obviously are raising numbers. But as I drill down on the different factors within our model, one of the factors that really jumps out at me is the earnings consistency factor. So not only is the company beating estimates, but they're doing so on a consistent basis. So analysts are raising numbers and the company is able to jump that bar, the stock should continue to do well.

As I look further, the stock is outperforming the broader market, meaning the S&P 500. Chaikin money flow is solidly bullish and has been persistently so for the past few months. So that's a sign of continued accumulation, even with the stock up here near all-time highs. So I think it makes a ton of sense to look at a name like Hexcel within the aerospace and defense group.

JAKE MERL: So what key levels would you be looking at to make that trade?

DAN RUSSO: So I like it here, right now. I think that there is upside in the stock to $94. And obviously, we want to trade with risk parameters in mind, never trade without a stop, I think $78 below that level would be a stop level. That makes sense. So I like Hexcel here, upside to $94 with a stop at $78.

JAKE MERL: And over what time horizon do you expect that to play out?

DAN RUSSO: Over the next three to six months.

JAKE MERL: And so Dan, before you also mentioned another stock that actually supplies directly to Boeing, what stock is that?

DAN RUSSO: Another stock that actually looks good to me within the group is Arconic, ARNC. And basically, similar setup, except in this case, the stock does have a very bullish rating, so expected to outperform even more than Hexcel over the next three to six months. Stock has persistently bullish money flow as well. It's outperforming the market. And they are set to report earnings next week. So I think that this is a compelling name that looks interesting to me.

Normally, I don't like to get too aggressive in front of an earnings report. But for this name, in particular, our proprietary overbought oversold indicator is actually in an oversold position. So it makes the setup a little bit more interesting to me in here and now.

JAKE MERL: And how much upside are you expecting?

JAKE MERL: So Dan, I'm going to put you on the spot here. Which stock do you like more right here?

JAKE MERL: And so I know the setup looks really good right now for both these stocks. But what would you say is the biggest risk to these trades?

DAN RUSSO: I think the biggest risk to these trades, number one is continued headline risk around Boeing. And number two is if the economy really starts to slow down now. We did get some GDP numbers today. There's no signs of a real slowdown that's of any concern yet, but if those numbers were to roll over hard, obviously this is a group that would come under pressure.

JAKE MERL: Well, Dan, we'll see how it plays out in the months to come. Thanks so much for joining us.

DAN RUSSO: Thanks for having me. It's great to be here.