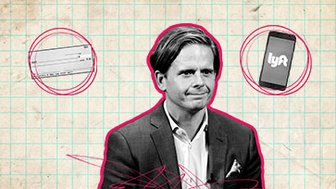 Looking Back on Winners: Lyft and Thunder Bridge

John Jannarone, editor in chief of IPO Edge, highlights the bull case for CEC Entertainment, the parent company of Chuck E. Cheese's, and reviews how to make the play through a particular SPAC: Leo Holdings Corp. He highlights the company’s valuation and key fundamentals, notes what investors should pay attention to, and breaks down the trade idea, in this interview with Jake Merl. Filmed on May 30. 2019.

JAKE MERL: Welcome to Trade Ideas. I'm Jake Merl, sitting down with John Jannarone, editor in chief of IPO Edge. John, great to have you back on the show.

JAKE MERL: So, what's your trade idea for today?

JOHN JANNARONE: So, my idea today is CEC Entertainment. This is the target of a SPAC. Just real quick, a SPAC is a special purpose acquisition company. So, the company raised $200 million about a year ago. And they didn't have a target in mind yet, this is the company they've chosen to buy. So, you can buy this for around $10 a share. If Cheryl's approved the deal, you wind up owning CEC Entertainment. Now, so the target itself, it's Chuck E. Cheese, that's what CEC is all about. So, it's Chuck E. Cheese and Peter Piper Pizza.

This is a brand that's been around since the 70s. And believe it or not, it's going very strong. That's despite all kinds of technical innovations that have come around, kids are playing with iPads, watching movies at home, they still want to go to Chuck E. Cheese.

JAKE MERL: So, what about the company's fundamentals, their valuation? What does the stock actually look like?

JOHN JANNARONE: So, the stock is a very, very good value play. It's trading below seven times EBITDA. It's going to grow about 10% of the next few years. And what I really like about it is it's not necessarily about going into uncharted territory, it's really remodels. So, this company was private under Apollo's ownership, which is another positive feature. Because they're going to keep 51% of it, which a lot of these SPACs we're seeing happen now. And during that time, they really spruce the place up, it's much cleaner, they have Wi Fi, you can have a drink or two in there. But not more than that. They don't want to be a bar, they made it adult friendly.

Why do they do that? Because kids always want to go there. But the parents always say no. So, what they're trying to do is get parents to say yes more often. And it's working. They are copping very, very healthy, positive numbers. And I expect them to do so for the foreseeable future.

JAKE MERL: So, what's the catalyst for growth? How do you see them outperforming?

JOHN JANNARONE: So, I think what I like about these guys is not so much. They could do a deal. They have some acquisition targets in mind. They could grow. But what I really like about them is that I don't think the stock is that dangerous. This is one of the few instances that I've ever seen of a company that managed to stay positive during the Great Recession. So, between 2008-2010, these guys had positive same store sales, which is remarkable. There are only a handful of companies I've seen do this. I think that Hermes and Louis Vuitton did that. But you can remember how bad it was. We're talking deep, deep, double digit negatives across retail, these guys managed to stay flat. And that to me is really, really interesting, especially when we're this far into a bull market.

JAKE MERL: So, why are you getting involved now and let's say, not six months ago, why specifically now?

JOHN JANNARONE: Well, remember with these SPACs, you can get it at $10 now. And I think that these are again, really, really interesting if you get in early. If you wait for this deal to get done, it's probably going to trade up. This is a good business. There haven't been many restaurants to go public at all the last few years, there's just one actually called Fat Burger, which went public about two years ago. But over the last four or five years, there just hasn't been any new issuance in this space. So, I think that once it's out there, and they start posting good numbers is going to get a lot of attention from investors.

So, as you might remember, if you ever went to Chuck E. Cheese as a kid, you would buy tokens. So, these days, you buy a little wrist bracelet, and it has a certain amount of credit. So, what they've introduced quite recently is all you can play. So, apparently this is going really, really well now, not just with children, but their moms and dads and investors should like it too. This has very, very high incremental margin dollars, because remember, the expense for them is the electricity of the machines, the tickets and these prizes, which aren't all that expensive. So, if you can get these guys to pay an extra $10, $20 per visit, that's enormous upside and it drops largely to the bottom line. So, I really liked that as a catalyst in near term.

JAKE MERL: So, how exactly do you go about trading this?

JOHN JANNARONE: So, on this one, unlike some of the others, remember, we talked about the warrants that are often attached to these SPACs, that issuance, the warrants on these are pretty fully valued, they're at about $1.50. And it's pretty easy to compare the warrants across all SPACs, because in general, the strike price is $11.50 a share. That's the trend these days. The one that we were talking about earlier, Repay. That one was trading much, much lower. And there was an opportunity. For this, I would say you focus on the common stock. Warrants are dangerous, right? Because if the deal is not approved, they're worthless, and to pay $1.50 is a lot. But I think that owning the common stock here makes a lot of sense.

JOHN JANNARONE: This is something that I would hold for two to three years, something like that. That's when you're going to see this thing start to work. When you look at valuation, let's go back to that for a second. These guys are below seven times EBITDA. I think that if you look across this space, some of the theme parks are way, way higher than that. SeaWorld, double digits, some of the other- Cedar Fair, even Dave and Busters, which is more of an adult version of Chuck E. Cheese. That one's about 10% more expensive than this. So, it's really cheap for that growth profile.

JAKE MERL: So, how much upside do you actually see?

JOHN JANNARONE: I would say you could you can comfortably expect something like 30% of the next two years. I don't think this is going to go to the moon. I hope I'm wrong. But this is more something that I view as a steady play, a staple to have in your portfolio.

JOHN JANNARONE: So, the biggest risk has got to be an economic recession, or they did have one issue about a year ago with an issue with credit card processing going wrong. So, you can have hiccups like that. When you try to make a company more modernized as they've done when it was being incubated at Apollo, they can have things go wrong. The good news is they were private long enough that I think they probably got through those hiccups. And again, with a recession, these guys have proven they can cop positive. So, those are the big risks. And I don't think that's severe.

JAKE MERL: John, that was great, thanks so much for joining us.

JAKE MERL: So, John is bullish on CEC Entertainment. Specifically, he likes buying ticker symbol LHC and sees 30% of upside over the next two to three years.

That was John Jannarone, editor in chief of IPO Edge and for Real Vision, I'm Jake Merl.