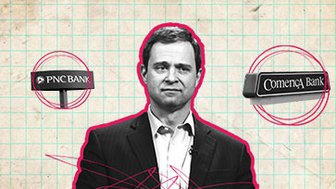 Peter Boockvar, CIO of Bleakley Advisory Group, is looking to take advantage of the technical breakout in gold. He explains the impact of a dovish Fed, notes the relationship between the metal and negative-yielding debt, and reveals just how high he sees prices going, in this interview with Justine Underhill. Filmed on June 28, 2019.

JUSTINE UNDERHILL: Welcome to Real Vision's Trade Ideas. Today, we're sitting down with Peter Boockvar of Bleakley Advisory Group. It's great to have you here.

PETER BOOCKVAR: Always fun to be here. Thanks, Justine.

JUSTINE UNDERHILL: So today let's talk about gold and this spectacular rise we've seen. It's broken out of almost this five year channel that it's been in. What do you see going on? How high do you see it potentially going?

PETER BOOCKVAR: Well, within that channel, every time I got to the upper end, I always said this is it, this is it, this is it, we're finally going to break out of the channel. But I feel like the fundamental situation and the technical basis is coming together that this really is going to break out of the upper end of that channel. And this is the beginning of a more sustained move to what I believe will be the previous highs of 2011.

JUSTINE UNDERHILL: So, could you go through the fundamentals that you're seeing that is pushing this move higher?

PETER BOOCKVAR: So it's a combination of we're on the cusp of a Fed easing cycle. Now, how quickly they do this or how low they go remains to be seen. But we have to assume that right now, the bond market's pricing in three cuts this year. And based on what Powell has said, and they look to going back to zero at some point, even though I think that's a terrible idea. But that seems to be their intent, then you also have the dollar that's beginning to weaken off that. And you have, importantly, the economic fundamentals in the US that is deteriorating, and why the Fed is looking to be so aggressive.

So you combine those factors, and gold finally has a bid. And lastly, which is adding to this, is that there's now an amazing relationship between the price in gold and the dollar amount of negative yielding securities around the world. And you go back over the last two years, and you chart the price of gold versus on Bloomberg, you can literally get the amount of the dollar value of negative yielding bonds. And they are pretty much mimicking each other. Because now, when you have 12 and a half trillion dollars of negative yielding securities of the sovereign bond market, that's about a quarter, that's an extraordinary amount.

So here, you have gold, which yields you nothing, but actually yields you something against a negative yielding asset, which actually is not really an asset, it's now a liability for those people that own it. So gold has really benefited from that in addition to getting a lift from those other factors. So gold has been in that channel you talked about was over the last two years, at least, it's really been like $1200, $1350, and just a ping pong back and forth. So once we started to get above $1375, $1400, it started to wake people up, because it also happened in conjunction with Bitcoin. Bitcoin blew out to the upside as well.

JUSTINE UNDERHILL: Do you see Bitcoin right now rallying for a lot of the same reasons that gold is?

PETER BOOCKVAR: So it seems that that is now the case. Rather than Bitcoin, with its rally up to 20,000, I felt like the thesis then is different than the thesis now. I think the thesis now and this move higher in Bitcoin is very similar to how people look at gold. And it's back to an asset with limited supply, negative yielding interest rates, central banks are better out of their minds, that are losing control and not helping the economy. And let's have an area of safety, let's have a form of value.

So I think Bitcoin and gold really are now being defined in very similar ways. Whereas Bitcoin maybe was going to be a transactional coin, and you're going to buy some pizza with it. Well, I don't think that's the case. And the same thing with gold, it's a store of value. And I think people are now grouping them together. So well, I have no opinion on where the price of Bitcoin ends up. I still pay attention to it in terms of the messaging that it gives to markets, because I think that the messaging that it is giving is very similar to what gold is saying. And that they're now speaking the same language

JUSTINE UNDERHILL: So then in terms of gold, are you also looking at technicals as well?

PETER BOOCKVAR: So the $1375 level, I believe, we talked about this channel, and breaking out from this downtrend, I think, was really that key level. And now that we've gotten above that, now, $1400 is becoming this sticky level. I know it's a round number and you're just picking it out of thin air. But when you're talking about an asset like this, you trend toward to round numbers. But I believe that you look at a chart, going back to 2012-2013, this is really a massive, multiyear bottom that we've created here, this reverse head and shoulders that I believe has real potential of going back to those 2011 highs.

And it's not just the technical, it's a combination of the fundamentals and technicals that are really coming together in why I think this time is different, in terms of not being a fake-out with previous rises in gold where, again, and I'm guilty of this as well as others that this is it, this is it, because I really be this is going to be it. And one other thing I want to distinguish, this potential easing cycle ahead for the Fed, versus the last infinity-type easing cycle in 2013, we had QE3 infinity QE is that we entered that year and the gold bulls, such as myself, after being global gold bulls since 2000, was, okay, this is what's going to finally get us to this parabolic, epic move above $2000, $2500, wherever, and ended up failing in $1900. And the exact opposite happened.

Gold totally broke down while the Fed was printing a trillion dollars in 2013. And that is because the market said you know what, the economy is good, the Fed is helping, let's rely on the Fed and everything is- the macro situation is fine, why own gold, I don't care what the Fed's doing. Now, we're entering a different form of an easing cycle. But the fundamentals around the world are deteriorating, the dollar is softening. You have all these negative yielding securities which didn't exist in 2013 really, you had only- I think it was maybe Sweden or Denmark that started down that road. So that's what separates this time versus that time.

JUSTINE UNDERHILL: So could you review the levels that you're looking at for gold as well as the stop loss that you would have?

JUSTINE UNDERHILL: How long do you see this taking to play out?

PETER BOOCKVAR: Well, I would say conservatively the next couple years, but the way that things happen in this world so quickly and you can easily see a Fed that gets more aggressive. And if they actually follow through with three cuts, and the dollar really rolls over, then you could see that move by the next six to 12 months instead of having to wait 24 months. And it's going to take silver with it to throw that into the mix. Silver has lagged because it's been more industrial and people worried about growth, the same situation with copper. But gold is going to be more of a pull upward in silver than the economic situation, whichever it might be when that moves. So silver is going to go up much higher too if I'm right on gold.

JUSTINE UNDERHILL: And would you see the biggest risk here being the Fed or are there other things in play?

PETER BOOCKVAR: No, I think potentially, the Fed if they don't go as aggressively as at least the bond market suspects they will, originally, there was a thought that oh, maybe Powell was different. Maybe he's different than Yellen. Maybe he's different than Bernanke, he but he's really no different. He voted for QE, all these QEs, he voted for zero interest rates for seven years. And in a speech in Chicago not too long ago, he said, when we go down to the go back to the lower bound, and we will, which means that he is intent on going back to zero if need be. Whereas if he was truly different, he would say, you know what, we'll stop at one.

Because going below one in the Fed Funds Rate is going to produce us nothing. It's not going to help us. It's going to trap us like the ECB and the BOJ. It's going to damage our banks, just like those central banks have damaged the equity of and profitability of their banks. We're not going to go there. But he's really no different and he seemed intent on going back there. So if you all of a sudden gets religion, yeah, maybe the rally in gold won't be to the same extent. But if he's just the same like all the others, which he seems to be, then I don't think it's going to be a headwind.

JUSTINE UNDERHILL: All right. Can you recap your trade thesis in 30 seconds?

PETER BOOCKVAR: So I don't believe this move higher in gold is the same fake-out that has teased us gold bulls for all these years going back to 2012 and particularly 2013 when the Fed went to QE infinity. I think you have softness in the US economy. The Fed that is responding with rate cuts, eventually, the dollar that is now softening, and you have a growing pile of negative yielding securities that has now proven to be a strong correlation to the price of gold because gold is a positive yielding security against those that are yielding less than nothing. So buy gold here at around $1400, I see upside breaking its 2011 peak with downside of only about $150 per ounce.

JUSTINE UNDERHILL: Great. Peter, thank you so much.

JUSTINE UNDERHILL: So, Peter is bullish on gold. Specifically, he thinks it will break $2,000 over the next few years and sees downside risk as low as $1250. Just remember, this is a trade idea and not investment advice. You should do your own research, consider your risk tolerance and invest accordingly.