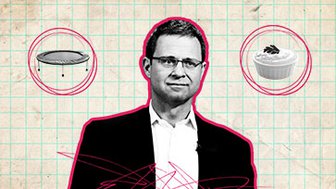 Rick Bensignor, founder of the Bensignor Group, breaks down the Ichimoku model, the distinct Japanese charting indicator, known as "cloud charts." He discusses the inadequacy of traditional technical tools and highlights the importance of understanding institutional indicators used around the world, in this interview with Brian Price. Filmed on March 21, 2019.

JUSTINE UNDERHILL: Welcome to Trade Ideas, where today, we have something a little bit different for you. A few times you've heard Rick Bensignor referred to the Ichimoku model also known as Cloud Charts. In this piece, he's going to explain what the model is, how it works and how it helps him pick entry and exit points for his trades. Rather than a traditional trade idea, it's more of a trading tutorial. And with that in mind, please enjoy Rick's conversation with Brian Price.

RICK BENSIGNOR: These are perfect models that fit into my concept that I've always had in the marketplace, which is buy low, sell high. Now, you would think that's what everybody's trying to do. That's the game everyone is supposedly playing. But it's actually very few people on the street with any consistency do this. And if you can determine through a variety of models, these are some we use, we simply called Ichimoku Cloud Charts. In the Western world, I'm considered the foremost expert in this Japanese model that was developed in the 1930s or '40s, I can't remember- went public in Japan in the 1960s. And virtually nothing is in English on it.

And what is on English is good basic background, but nothing advanced on it. I use this to my competitive advantage because I understand it better than anything that's in print in English. And use this as part of the models that I use for institutional clients as well as I also have one of those silos too that's called In the Know Trader. So, that's my individual investor newsletter. And the whole goal of that is to be able to give individual investors access to models that they would never have access to because they're very expensive and they're really in the institutional domain.

So, most one of the things I like to tell people, on the public side, the individual investor side, the tools they have, especially in the technical arena, whether it's a MACD, moving averages, RSI, stochastics, just the general bag of tricks, is not generally what institutional traders use. They're certainly not the main reason they're going to do something if they're looking to buy- if an institutional trader's looking to buy something, and the RSI happens to be oversold, that's just maybe one more reason they'll do it. But they're never going to put the trade on, oh, RSI sold out to 20%. Let's go put something on, its oversold. It's a far more complicated and distinct way of looking at the markets than the way the public trades.

And it's also a realization of not taking the textbook definition of a model and thinking that just because some book said, if RSI gets overbought, you might want to be a seller. It's saying the markets move too far too fast is typically the way they define it. There are many people in the industry who'll tell you the best time to be a buyer is when the RSI gets overbought. So, this is exactly opposite to what textbooks tell you.

So, in just taking a look at what this Ichimoku model is. And in Japan, it's called Ichimoku Kinko Hyo. That's the full name of the model. Here, we call them Cloud Charts. This model is a semblance of a moving average model. But it looks- instead of just mathematically calculating moving averages the way we do here, this gets accommodation of- actually, it just give you the five lines that make up the model, you've got a nine-day average midpoint.

So, software looks back over the last nine trading sessions, finds the highest high, the lowest low over those nine bars, adds them up and divides by two. So, it's the midpoint last night bars. That's the first line. Second line is the midpoint of the last 26 bars. And a lot of people go nine and 26. That sounds familiar. That's like MACD.

The thing is that MACD was developed probably 40 years after this model was, so people say so line nine, and what's 26? What's that mean? Well, back in the 1940s, in Japan, they traded on Saturdays too. So, nine days represented about a week and a half of trading action, which the person who developed this model, Goichi Hosoda, figured that's a short-term indicator, that a week and a half. What's 26? It's how many trading days were in a month on average. So, it's a week and a half versus referencing a month's worth the price action. So, those were the first two calculations.

The third is the midpoint of these two midpoints that we just calculated, plot, figured out mathematically but take that value and plot it forward 26 bars in time. So, we've now this one of the few studies that actually starts giving price information ahead of the current timeframe you're trading. The fourth line looks back 52 bars from the current bar and finds the midpoint of last 52 bars but takes that price and plots it forward. And the difference between the two lines that we've just plotted create this zone, which is called the cloud.

And the fifth line is simply current price push backwards in time 26 bars, and it's the interaction of current price where trades relative to the shapes and forms of these modified moving averages that creates this indicator. And the cool thing about it is the entire eastern part of the world uses this indicator, the Cloud Chart, the same way in the Western world we start off by saying, okay, we have a bar chart. Now, let's analyze. Well, they start off with a Cloud Chart. Now, let's analyze.

So, you've got a third of the trading world looking at the same, let's say, popularly traded items- securities. You've got a third of the world looking the same way at the same chart. You darn will want to know what people are thinking because if they turned sellers on something that had been buyers, that stock is going to sell off when you have that many people doing the same thing. So, part of it is just knowing how other traders are thinking.

BRIAN PRICE: A whole lot of perspective. I really appreciate it.

RICK BENSIGNOR: Brian, thanks for having me.

BRIAN PRICE: That's Rick Bensignor of the Bensignor Group and I am Brian Price for Real Vision's Trade Ideas. Thank you as always for watching.