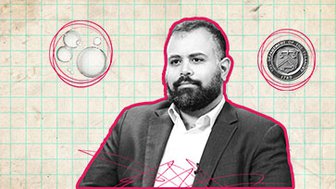 Tom Thornton, founder of Hedge Fund Telemetry, returns to Real Vision to discuss his short thesis on Alibaba. In this interview with Jake Merl, Thornton highlights various technical and liquidity concerns for the stock, and suggests an options trade to take advantage of the current opportunity. Filmed on September 24, 2019.

JAKE MERL: Welcome to Trade Ideas. I'm your host, Jake Merl, sitting down with Tom Thornton, founder of Hedge Fund Telemetry. Tom, great to have you back on the show.

JAKE MERL: Today, we're here to talk about Alibaba. It's up about 15% over the past few months, just since May, and up roughly 30% or so it's year to date. We'd love to get your thoughts of what you make of the stock right here, and what you expect in the months to come.

TOM THORNTON: I like Alibaba as a short. There's a couple reasons why I like it as a short. One thing I'm not going to talk about today are the fundamentals or the myriad of accounting, which I'll leave that to the experts. It's a very difficult balance sheet to try to uncover. What I'm looking at right now are the technical factors and liquidity, the stock has made a lower high and it has a weekly demarked sequential countdown 13. The last time that happened was at the high in June of '18. I see this as an exhaustion signal.

JAKE MERL: With the low short interest and the upside demarked exhaustion signals, basically you're saying there's like dry powder now where the stock is vulnerable. What would you say as a specific catalyst to actually get the stock falling? What are you looking at there?

TOM THORNTON: Well, we're coming into a weaker seasonal period for Alibaba. The second half is typically a weaker time. There is a very important catalyst that is a potential. I don't know if it's going to happen but right now, SoftBank owns 26% Alibaba and they've owned it for years pre-IPO.

In June, they sold $11 billion worth of stock, about 3% of the total float. It was a very well-known telegraphed sale that they announced in 2016. I think a lot of that short interest was already built up into that, and a lot of the shorts covered into that secondary.

If they suddenly have to start selling a little bit more Alibaba because of the disaster that they're having with WeWork or let's say, Uber, which is underwater from their pre-market or pre-IPO buy-in, this could be a real problem here. I don't think the market can absorb a 3% to 5% of liquidation if they have to announce it. I think the market will take it very, very bad.

JAKE MERL: How do you suggest traders play the current situation? Would you suggest going out and shorting the actual stock, or is there an options trade you recommend?

TOM THORNTON: Well, if you're long the stock, sell it. That's first. I think shorting the stock is fine. It's very liquid. Again, there's not a real risk of short squeeze with one day to cover. I'd use like a $200, $205 stop but there's also ways of playing it with options. I look at the $160, $130 February expiration. You're paying about six bucks, five to six bucks, and you get a five to six times your money if it goes to the lower strike at expiration in February.

JAKE MERL: When trading this option, do you have a risk management tactic in mind? Like would you be okay losing your premium, the $5 or $6, or would you get out of the trade at a certain point?

TOM THORNTON: Well, look, when you're buying a long position with a put or a call, you definitely run the risk of losing everything you have. What I typically do is if I start making money in an option, I'll take some off. If this goes wildly against me, I'll take the lower strike off and then hold on to what's remaining of the higher strike.

JAKE MERL: You have the liquidity factors on your side, the seasonal factors, and also the technical factors. This all looks great, but what would you say is the biggest risk to your trade? Where could things go wrong?

TOM THORNTON: Well, there's a couple things that the market could interpret as being very, very positive, a China trade deal. The market would price that in and say, "Well, this is great." There's also the risk of them doing a listing in Hong Kong. They've been talking about doing it for a long time. It just hasn't materialized yet.

JAKE MERL: Well, Tom, thanks so much for coming on the show. We'll see how it plays out in the months to come.

JAKE MERL: Tom is bearish on Alibaba. Specifically, he likes buying the February $160, $130 put spread for approximately $5. He sees a profit as much as five times the premium paid.