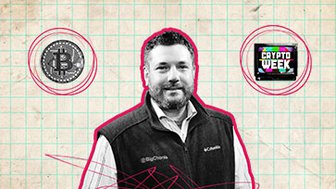 Into the Bitcoin Charts

Steve Strazza, co-founder of The Chart Report, highlights the knock-on effects from a dovish Fed and suggests playing the setup with a bullish bet on frontier markets. He discusses why buying frontier markets makes more sense than emerging markets at the current moment, and examines key levels of support for traders to make the play, in this interview with Jake Merl. Filmed on June 24, 2019.

JAKE MERL: So, we've seen this dovish pivot by the Fed over the past six months. And just last week, Jay Powell came out and gave us the green light that this rate hiking cycle is coming to an end. And we saw the dollar weaken, we saw gold spike. So, what exactly are you looking at right now?

STEVE STRAZZA: So, that's a great point. I guess the Fed chairman might have caught markets off- guard last week. And now, if you look at Fed Fund Futures, are pricing in, I think, about 100% chance of a rate cut at the next meeting in July. So, we saw the dollar sell off. Obviously, global equity markets love this. It's more easy money or further ins of the easy money policy, that we're seeing central banks around the world, dollar sold off, and that's usually positive for foreign equities and also commodities.

So, there's a couple different ways that you can craft a trade around this. We're hearing a lot of people yell about gold and short the dollar. That's a very simple way to play this. But there's other stuff going on in the global equity landscape. I think we could find pockets of strength in equities.

JAKE MERL: So, what exactly are you looking at?

STEVE STRAZZA: If you look at the performance of different global benchmarks, since the last time US equities peaked, which was April 30th, what you see is that pretty much the rest of the world- Europe, Asia, you can look at the all country world index ex-US, the S&P, emerging markets, they all corrected through May and into June and have recovered since. But if you look at frontier markets, they barely even corrected so they're very resilient during the most recent selloff. And they're actually up about 7% over the same period, when all these other global benchmarks are about flat at best.

JAKE MERL: So, I feel like frontier markets don't get much love .

STEVE STRAZZA: At all, yeah.

JAKE MERL: Yeah. So, why are you looking at frontier markets versus, let's say, emerging markets in general?

STEVE STRAZZA: Partially for that reason, because they don't get much love. And that's great from sentiment perspective. It's always nice to be looking in areas where other people are not. But why I don't want to play emerging markets? Typically, sure, a weak dollar environment would be great for EM, would be great for emerging market equities. But right now, with the environment we're in geopolitically, with trade related headlines coming out every day, the terror for heating up between China and the US, China makes up about 30% of the emerging markets index, I don't want that headline risk right now. Frontier markets are so insignificant to the global economy. I hate to say that, but they're really insulated from any trade related risks.

JAKE MERL: So, is there a particular frontier market you're most interested in? Or are you just looking to play it from a broader perspective?

STEVE STRAZZA: If I had to pick one, I'd pick Argentina. It's one of the better looking trends right now among foreign equities. I think it's up about 15% in the last three weeks, makes up about 8% of the frontier markets index. Other large weightings are Kuwait and Vietnam. Together, they make up almost 50% of the index, those three countries. So, this is really the junk of the global equity trade. It'd be like trading micro caps in the US.

STEVE STRAZZA: Argentina has been extended right now. So, from a risk reward perspective, that would already left the station, but you're still going to get exposure to it if you're in frontier markets. What we saw in frontier markets recently is about since February, it's been consolidating at about a 4% range between about $28 and $29. Very tight. And if you go back to about last August, it's been in a bit of a 10-month consolidation, a nice little basing pattern. And it's tested that $29 level I think five or six times in the past 10 months.

And more time levels tested, it does not get stronger. Actually, what happens is each time it's tested, some of that overhead supply, the sellers who are sitting there, waiting at that level, they're absorbed by buyers. So, each time a rally goes up to $29 and the sellers absorb it, there's fewer and fewer sellers to do that going forward in the future when that level is tested.

Finally, in May, we got a breakout of that $29 level. We ripped for a while, we moved about $1 higher, which is a measured move from the rectangle, 28 to 29. Measure it up $1, it was about 30. And in this past week, the Monday morning of last week, we gapped all the way down to 20-Day Moving Average, 50-Day Moving Average, 200-Day Moving Average, right back into the middle of that range. And buyers just gradually, throughout the week, gained control and prices moved higher. In Friday, we saw another flush out, another strong hammer candle, where buyers were able to regain control throughout the day, basically engulf the prior three days range and close on the highs of the week.

So, another bullish characteristic about this trade setup is whenever prices are consolidating in a tight range, you like to see volatility expand when prices resolved either to the upside or to the downside. In this case, we saw prices resolve to the upside. And we got a breakout of this 10-month consolidation. So, prices were trending very tightly since about February, and you saw volatility really, really contract to an extremely low level.

And I just see that line start to rise. All that's indicating is that we're now exiting a sideways trending or a non-trending market. And we're entering a market that's now trending. And whenever a breakout starts to occur, you want to see that happen. And this is a characteristic that we have in this chart setup.

JAKE MERL: So, in addition to the factors you just laid out, are there any other technicals you're watching?

STEVE STRAZZA: Yeah, I just want to really reinforce just how important this $29 level is. If you look at the 2014-2015 bear market in frontier markets, if you look at the longer term chart of FM, the 38% Fibonacci retracement is actually at that $29 level. So, not only do we have buyers and sellers battling at this level over the past 10-month period during this consolidation, but this is a very important level based on the 2014 bear market from a Fibonacci retracement perspective.

So, when we have a confluence of resistance or support at the same level, it only reinforces that support or resistance and makes it stronger. We also have a VWAP from all-time highs coming down right about where prices exhausted on their first leg up before they gapped down last week. So, that VWAP also represents a bit of a level of resistance. Basically, we have a confluence of interest at this $29 level from the anchor VWAP from the highs, the 20, 50 and 200-Day Moving Average. And from simply the resistance level that it's been tested multiple times at 29. So, on a breakout above that level, we're expecting a pretty powerful move. We already got a little whipsaw move back down to retest it. So, now, we should be off to the races. And I think you could target those 2018 highs.

JAKE MERL: So, that $29 level, that's where you'd be entering the trade?

STEVE STRAZZA: Yep, I'd be buying weakness towards $29. And you could even give this trade 'til about $28 the VWAP from the all-time lows, which you'll see on the weekly chart, which is also the bottom of that rectangular range from February until now.

JAKE MERL: So, that $28 level, would that be your stop loss?

STEVE STRAZZA: Yes. And you're really giving yourself a lot of room. You could probably play it off $29 if you want to be a little bit more aggressive. But if you play it on move back to the highs from 2018, that'll give you about a four and a half time risk reward if you give yourself $28 as a stop.

JAKE MERL: In over what time horizon do you expect this to play out?

STEVE STRAZZA: This is a broader market index. So, you want to give it about six months. It's going to be a little bit slower moving. So, I'll give at least 'til the end of the year.

JAKE MERL: And so, Steve, with all this in mind, what would you say is the biggest risk to your trade?

STEVE STRAZZA: Honestly, the biggest risk is like I just talked about, if we do fall back below $29, that breakout level, there could be some opportunity costs in there. We could get stuck back in the sideways range for a while between $28 and $29. And there might be other areas in the market that you'd rather be in. You're still protected because you have your stop at $28. And the most you're going to lose is 4.5%, 5%. But if you want to avoid that, you can set your stop at $29.

JAKE MERL: Well, Steve, that was great. We'll see how it plays out in the months to come. Thanks so much for joining us.

JAKE MERL: So, Steve is bullish on frontier markets. Specifically, he likes buying the iShares MSCI Frontier 100 ETF, ticker symbol FM, to $29 with a stop loss at $28 and a target price of $36 over the next six months.

That was Steve Strazza, co-founder of The Chart Report and for Real Vision, I'm Jake Merl.