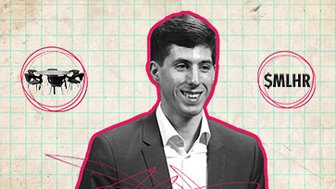 Tom Bruni, CMT, of All Star Charts, walks through the…

Guy Cerundolo, CMT, of Cerundolo Investment Research, revisits his contrarian bet on European equities from the beginning of the year and specifically walks through his winning trades on Commerzbank and Safran. He breaks down the technical signals from his proprietary model, and discusses how traders can take advantage of the current setup in the German DAX and CAC 40, in this interview with Justine Underhill. Filmed on July 10, 2019.

JUSTINE UNDERHILL: Welcome to Real Vision's Trade Ideas. Today, we're sitting down with Guy Cerundolo of Cerundolo Investment Research. It is great to have you back.

GUY CERUNDOLO: Great to be back. Thank you.

JUSTINE UNDERHILL: So, we're going to follow up on your bullish theses on both the DAX and the CAC 40. And specifically, you were here at the beginning of the year, and you were recommending playing this by going long Commerzbank as well as Safran. You saw a 30% upside to Commerzbank and that's exactly what happened. And then for Safran, you saw that it would potentially go up 15% from the lows, and again, that played out quite well. So, could you take us through what you were looking at the time and what followed?

GUY CERUNDOLO: So, in covering the domestic developed markets, I had noticed that both- starting with the CAC France, it had achieved the downside target on my proprietary money flow analysis. And the thing that caught my eye there was that at the market level, the index that also traded to the lower end of a long term regression trend channel of the 2009 low. So, when I had the confluence of downside target, the support levels hit, that's when I initiated the bullish call on the on the CAC. And about a week or so later was on the DAX that followed up, that too had achieved MFU for money flow unit for target.

So, with that said, I had put out bullish calls for both markets. And I had chosen a couple of stocks that actually lined up nicely on some of the work I do. Commerzbank was one and that it had declined to a prior multiyear low. The downside target, which was off of the prior year's high, it was a MFU for target as well. And then when I was here, I said I'm expecting some type of an ABC, meaning a rally than a pullback to the support to unfold. And what I found amazing was afterwards that, yes, we were up a little bit 30%, 30.6 and a prior ABC rally was at 30% move.

So, in terms of symmetrical work, or the target that was achieved, we got now a pullback to the prior low. So, I think the C route, the C decline is done. And actually, Commerzbank triggered another by a week ago. I don't have an upside target yet, but it's shaped up nicely.

JUSTINE UNDERHILL: So, before we get into that, could you break down exactly how your model works? What goes into an- I know this is all technical, right?

GUY CERUNDOLO: Yes, there's only a few other people that know how to do it. There's three other people, as I mentioned before, two of whom are retired. And basically, it's a way of measuring supply and demand in an asset. So, I do this work. And we've done this work on market indices on stocks, currencies, commodities, wherever there is money flowing in and out of an asset. It can be analyzed this way. And so, that I've been using this for 25 years at some of the largest firms around Fidelity and Wellington where I've worked and also co-managed money. And it's really critical to the work I do, it's more important to me than a straight edge ruler that a technician would use.

So, what it does is it tries to help find these inflection points where in the case of these indices, where there's enough supply coming out of a market then you can see where it's abating and then there's an inflection point, the odds of an inflection point increase. And then that's exactly what happened with the CAC, the DAX and Commerzbank was another. So, the model itself finds those exhaustion points. And then on the reverse side, when demand starts to build and a little bit of time to go by on a daily and weekly timeframe to start measuring the demand, then you could have upside projections, and they start off short, intermediate, long term.

GUY CERUNDOLO: Yeah, so the MFU-1 is basically the- let's think of it as the base of which the demand is starting to come into an asset. After that's complete- that's the tricky part, knowing when it is complete- then you start to get upside projections. And MFU-2 is typically a zone where you get the first sharp pullback after the base. And it gives you an opportunity to re-engage or to add to that conviction of a long position. And then once you surpass that MFU-2, that's when you really press the position. And when you get to MFU-3, depending on the market cycle you're in, there's about a 70% chance that you could get a significant pullback, and that does happen from time to time.

And then eventually, you'll go to MFU-4 and that's where about 75% of the time, you'll get a more of a big correction and things will shift the other way. And then about 5% of the times, you will have MFU-5 happened. And that happened in 2002 with the tech bubble. And 2009 low actually was MFU-5.

JUSTINE UNDERHILL: Interesting. So, in the case of Commerzbank, at the time that you were suggesting this trade, there was all sorts of things going on with Deutsche Bank, there's a potential merger that didn't go through. Do you look at any of these other fundamental things or does that incorporate into your research at all? Because that didn't end up panning out, but then the trade ended up working out anyway.

GUY CERUNDOLO: That's something I don't foresee. And it's not part of my toolkit. And the funny thing too, when I've worked at, let's say Fidelity way back when, and I had a team of other three or four other technicians. And its portfolio managers want us to do our work and stick to our discipline. They don't want you to bring in all these other factors and what edge do I have? And what edge do a lot of other people have? I've been in rooms where the morning meetings is like 50 to 125 investors, going back and forth, talking bought this one item and the bulls and bears.

So, the point is, there's a lot of noise. And if I could just measure supply, demand the way I do it, at least I have some type of an edge and I've seen this happen many, many times over the years. You get price action and then the story comes out why? So, I can't tell you why it's going to happen. I think the odds are that something like that was going to happen. The stop was pretty tight. If it didn't work, then it doesn't work.

JUSTINE UNDERHILL: Now, at the time that you suggested this trade it was in early January, there were a lot of other markets that were bottoming out at the time. Were you also getting signals on some of these other markets? Because if you put the trade on, let's say the S&P 500, that also would have played out quite nicely.

GUY CERUNDOLO: Oh, yes. The S&P came a little bit later. And I didn't get the exact low in December, but in January, yes, I upgraded the S&P and went on to do a number of other Italy and Spain at some point. And then other market in the season, the US mid-cap, small cap.

JUSTINE UNDERHILL: And did you take profits on your Commerzbank and Safran trades?

GUY CERUNDOLO: Yes. The Commerzbank didn't get the exact high but just slightly off the high than once we get a short term trendline break just to confirm that it was done, yes. And Safran, when it reached that target, I felt when you have an upside target based on the money flow work, just take it. And it did run a little bit more than the 124, a couple percent, which is fine. But then it's corrected 10%. And now, it's re-engaged in the upside. But yes, they were closed positions.

JUSTINE UNDERHILL: Okay. So, based on where we are now, can you take us through your charts and what signals you're seeing and where people should trade? Is there still more room to run here?

GUY CERUNDOLO: I think in both indices, the CAC and the DAX, I do see about 6% more on the DAX. And that comes into a target zone. And that's where I will have to analyze, is this say an important inflection point or just a pause? And I won't know that until we get into that zone and see how the market behaves. What if there's a lot of supply coming into the market? But as it stands now, this trajectory is still upward sloping. 6% there.

JUSTINE UNDERHILL: Yeah. Do these signals give any sense of timing?

GUY CERUNDOLO: They don't. Just theoretically, we could be up 5% in a week or take a month. Time and price are the most difficult things I've had to try to help people understand. It's really, really difficult to do. I feel very confident with the work that I do in terms of the price action, the price levels, but the timing is I'm not sure.

JUSTINE UNDERHILL: So, you've been long the CAC and the DAX for quite a while now, would you suggest this trade now for new people getting into it? Or is it simply just continuing the long that you had from a while ago?

GUY CERUNDOLO: I think for a nimble trader, one couldn't try to play this last 5% to 6% upside and keep a discipline stop, that's even a new two week low on each index. But for the people that are engaged from the low with a risk reward was very good, then I am still holding strong to stay in involved, stay in engaged, and then play the upside.

JUSTINE UNDERHILL: Okay, could you summarize your trade ideas in 30 seconds?

GUY CERUNDOLO: I would still stay long some of these major European markets, both CAC and DAX, minimum 5% upside before the decision is made as to whether it's kept or do we pause for a refresh even higher? Bigger picture, the trends are looking really good in these indices. But if I could capture the first at least 20% move of part of that trade, then I'm pretty happy with that. But we'll know within the next couple months.

JUSTINE UNDERHILL: Great. Guy, thank you so much.

Just remember this a trade idea and not investment advice. You should do your own research, consider your risk tolerance and invest accordingly. For Real Vision, I'm Justine Underhill.