Paying a Premium for Growth 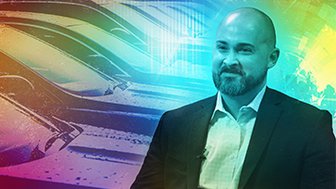 Daniel Ruiz of Blinders Off Research returns to update us…

Paying a Premium for Growth

Dan Russo, CMT, chief market strategist at Chaikin Analytics, sees global growth's slowdown as a bullish signal for large cap growth stocks— especially relative to value. In this interview with Justine Underhill, he breaks down the charts and provides a pairs trade to play his thesis using ETFs and put spreads. Filmed on March 26, 2019.

JUSTINE UNDERHILL Welcome to Real Vision's Trade Ideas. Today we're sitting down with Dan Russo of Chaikin Analytics. Great to have you back.

DAN RUSSO: Great to be back. Thanks for having me.

JUSTINE UNDERHILL So what are you looking at in the markets right now?

DAN RUSSO: So our thesis is that in a slowing growth environment, both in the US and globally, that investors are going to pay a premium for growth. So most recently, we've seen the Fed come out and lower their GDP forecasts for the US, for 2019 and 2020 to 2.1% and 1.9% respectively. Flash PMIs out of the eurozone on Friday, 71 month low. So clearly, there's slowing growth, both in the US and globally.

And our view is that in an environment where growth is slowing, investors will pay up for secular growth.

JUSTINE UNDERHILL OK. So you want to get into growth. What sort of charts are you looking at here?

DAN RUSSO: So I just am looking at the Russell 3000 growth index, relative to the Russell 3000 value index. And when you take a look at that ratio chart, what you can see is a clear uptrend, with growth outperforming value for the better part of two years before going into a bit of a consolidation when the market topped back last fall, and plummeted into the lows in and around Christmas Eve. And now as the market's rallied back, growth has begun to outperform value again, as it has actually broken out of that consolidation.

And what's interesting to me is that there's actually momentum behind this move. Because as the ratio was consolidating, the RSI indicator, which is my preferred metric for momentum, never became oversold. So to me, that tells me that the strength of that trend is strong to the upside.

Now, we've broken out, retaken the 200 day moving average. And the indicator has actually gone on to an overbought condition. So that tells me that there's momentum behind the trend, and it's likely to persist, at least over the next three to six months.

JUSTINE UNDERHILL How would you go about trading growth versus value?

DAN RUSSO: Using ETFs as a proxy for growth. The SPDR, S&P 500 growth ETF is ticker symbol IVW is a good way to get exposure to large cap growth. And at Chaikin Analytics, we actually rate ETFs. And the rating is a function of the technical dynamics of the fund itself and then the fundamentals of the components of the ETF. We have a 20 factor model that looks at mostly the fundamentals of over 4,000 US listed equities.

So when that ratio is greater than one, it tells me that that fund is likely to outperform over the next three to six months. And then from there, we kind of layer in the normal technical analysis that I would do. So we have a fund with a bullish rating. It's been outperforming the market since February. Our overbought, oversold indicator, which is proprietary to us, is routinely becoming overbought. So again, there's momentum behind the move.

JUSTINE UNDERHILL Now, IVW is weighted towards companies like Facebook and other tech names, Amazon, Microsoft. Are you bullish on those stocks individually as well? Specifically those in the tech sector?

DAN RUSSO: Within our model Facebook actually just shifted to a neutral rating, based on some fundamental factors that we've seen. But if I look at a composite of the, quote, unquote, FANG stocks, they actually broke out recently, relative to the market. Which kind of makes sense if you buy my thesis of investors paying a premium for growth, and in particular large cap growth.

JUSTINE UNDERHILL Gotcha. So then what levels would you be looking at in this ETF?

DAN RUSSO: In this ETF I think it makes sense to get long right here. And as long as it's above $165, I think that there's upside in the near term to $180, and potentially above that level as the trend persists.

JUSTINE UNDERHILL And so then in terms of value, what are you looking at there?

DAN RUSSO: So for me, the growth over value is a relative play. In order to play on the theme of global growth slowing, I'm actually looking at the transports as a bearish trade. And in order to keep the analysis intact, I'm using SPDR, the SPDR ETFs. And I'm looking at the XTN, which has a bearish rating, within our model, for technicals and the fundamentals of the constituents.

And what's interesting to me is our overbought, oversold indicator is actually beginning to roll over without ever having become overbought on this most recent rally. So that to me tells me that the downside momentum is strong, and that the transports are likely to continue to underperform on a relative basis, and actually just trade lower on an absolute basis.

JUSTINE UNDERHILL OK. So then how would you go about trading that ETF? Or would you look at another ETF?

DAN RUSSO: Well, just given liquidity constraints around XTN, I would look at the IYT, the iShares, transports ETF. It has a lot of the same technical and fundamental dynamics to the bearish side as XTN, and is a bit more liquid, and has listed options.

I like expressing the view to the downside via options. I want to define the risk. So what I'm looking at for IYT is the May, 17 $180-$172 put spread, which as of last night's close you could buy for $275 per contract. It gives you a max reward of $525 should IYT be below that $172 level at expiration.

JUSTINE UNDERHILL You're looking at transports here. Would you also consider your other value plays, shorting those? Like, let's say, utilities?

DAN RUSSO: I actually like utilities. When we look at the sectors within the S&P 500 and their individual ETFs, again, applying our analysis of the ratio of bullish to bear stocks, utilities have been the number one or two group for five or six months now. The trend is strong.

I would argue that XLU, if that's how you're going to express that view, is overbought in the near-term. But I think that you can use pullbacks to about the $57 level for XLU to increase exposure.

It's actually one of the groups that I like. And that's largely a function of declining rates, which plays on the same theme that I'm talking about. In a slowing growth environment, rates are likely going to head lower.

Here in the US there's a relative component to rates. Right. Our 10-year yield just went below 2.5%, 2.45%. But if we look at 10-year yields in Germany, 10-year yields in Japan, they're actually negative. So from a relative perspective, global investors who are looking for yield are likely to come to the US, pushing our yields lower. And that's likely a tailwind to groups like utilities and real estate. Those are actually two of the groups that I like the most right now.

JUSTINE UNDERHILL What do you see as the biggest risk to your overall thesis about growth and value? And utilities as well?

DAN RUSSO: The biggest risk would be that, from an economic standpoint, this is just a mid cycle slowdown, and that towards the back half of this year growth reaccelerates. Because I don't think anybody's expecting that. In fact, investors now are starting to think about a potential rate cut this year.

I mean, if you think about where we were at the tail end of last year, investors were looking for three or four rate hikes this year. The Fed just came out last week and told us that rate hikes are pretty much off the table for the remainder of this year. And now investors are starting to think about a cut.

So it stands to reason that nobody is really positioned for growth to accelerate through the back half of this year. So to me, that would be the biggest risk to this thesis.

JUSTINE UNDERHILL OK. So we might see a risk on scenario coming up.

DAN RUSSO: It could be. And positioning would likely shift away from those defensive groups and the yield plays and more towards some of the value plays that have been beaten down.

JUSTINE UNDERHILL Great. Dan, thank you so much.

DAN RUSSO: Thank you so much.

JUSTINE UNDERHILL So Dan likes growth over value. Specifically, he's looking at buying the iShares S&P 500 growth ETF IVW at current levels. He has a stop loss at $165 and a target of $180 over the next three to six months.

To express his bearish value thesis, he likes shorting the iShares Transportation Average ETF IYT at current levels, with a stop loss at $185 and a target of $172. To express that trade, he's using the May 17 $180-$172 put spread.

Just remember that this is a trade idea and not investment advice. You should do your own research, consider your risk tolerance, and invest accordingly. For Real Vision, I'm Justine Underhill.