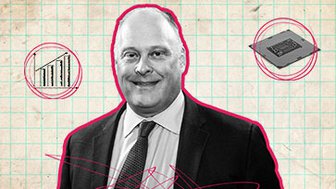 Craig Johnson, CFA, CMT, returns to Real Vision with a…

John Jannarone, editor in chief of IPO Edge, revisits his home-run trade on Repay Holdings, and discusses how much more upside he sees for the stock. He reviews the recent deal that finally closed, and explains how traders can take advantage of the opportunity, in this interview with Jake Merl. Filmed on July 22, 2019.

JAKE MERL: Welcome to Trade Ideas. I'm Jake Merl, sitting down with John Jannarone, editor- in-chief of IPO Edge. John, great to have you back on the show.

JAKE MERL: So today, we actually have to review on Thunder Bridge. You crushed it, man. You were actually up 200% over the past few months on this stock. Can you please walk us through exactly what you were looking at? And how things have unfolded over these past few months?

JOHN JANNARONE: Yeah, sure, Jake. So, what happened with Thunder Bridge, which is now Repay, because the SPAC deal closed, is the warrants looked really cheap. They just weren't getting very much attention. So, I saw an opportunity there to get exposure to the warrants, which is risky. Because if the deal hadn't closed, they would be worthless. But since then, the deal has closed. And what happened was really interesting.

Baron Capital, big long only fund came in, they do a lot of small cap stocks, they have a lot of capital that they're managing. They came in and they said, you know what, why don't we invest alongside the rest of the investors. But let's get rid of all this delusion for the warrants. So, what happened is the warrants got taken out for $1.50 in cash plus a quarter of a warrant. So, what I said last time I was on here with you, was to hang in there, and it worked out. So, the stock is now trading and the warrants are also trading as well. And it looks like they're worth roughly if you count $1.50, $2.40 cents a share.

JAKE MERL: And so, you originally recommended buying the warrants below 80 cents in April, you then doubled down at $1.65 or so in May. And now, they're trading, like you said, above $2.40. So given the recent price action and everything we've seen, would you be buying it here at current levels? Or would you just be taking profits?

JOHN JANNARONE: I think in the beginning, I really believe that the business, the common stock is were $15 a share. So, I still like it. I don't like it as much as I did before. But yeah, you might take a little profit here. But remember, after the warrants announcement came out, the warrant dipped a little bit. And that's when I said to get back in because it just looked too cheap. It was worth $1.50 in cash alone and I saw it dipping below $1.60. And that's when I came on last time and said, you should get into it here. So if you see people taking profit, which is I believe what happened last time, there could be another chance to jump along for the ride.

JAKE MERL: And over what time horizon do you think it'll reach that $15 per share?

JOHN JANNARONE: I'd say the next two years or so. The company is a steady grower. But this is not something that's going to trade like some of these crazy IPOs that we've seen, like beyond meat or anything like that.

JAKE MERL: Well, John, we'll see how it plays out in months to come. Thanks so much for joining us.

JOHN JANNARONE: Thanks a lot.

JAKE MERL: So, John is still bullish on Repay. Specifically, he likes buying ticker symbol RPAY at current levels with the target price of $15 over the next two years. That was John Jannarone of IPO Edge, and for Real Vision, I'm Jake Merl.