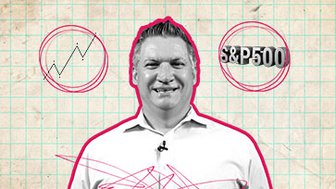 Dan Russo, CMT, chief market strategist at Chaikin Analytics, doubles down on his slowing-growth thesis and highlights two new ways to play the current environment: Microsoft and American Homes 4 Rent. He examines the Chaikin model and technical setups for both the software and real estate sectors, and discusses key levels for his trades, in this interview with Justine Underhill. Filmed on May 23, 2019.

JUSTINE UNDERHILL: Welcome to Real Vision's Trade Ideas. Today, we're sitting down with Dan Russo of Chaikin Analytics. Great to have you back.

DAN RUSSO: Great to be back. Thank you for having me.

JUSTINE UNDERHILL: So, last time you were here, you were looking at growth, specifically, we're in a slowing growth environment so investors were going to start paying a premium for growth stocks. Could you tell us a little bit about that trade and how that worked out?

DAN RUSSO: Yeah, that thesis is playing out. And it's still playing out actually. It's still a theme that I like, going forward. Just last week, retail sales numbers came out, showed slowing growth, still growth, but the second derivative is slowing down. Same thing with industrial production. And now, we have the unknown impacts of the trade war, which in my opinion, is now becoming the base case, and is no longer the bear case for the market. Companies like Walmart and Macy's have come out and started to say that should the tariffs remain in place for an extended period of time and should we go ahead and institute the tariffs on the remaining 300 billion of Chinese imports, that's likely going to start to impact the consumer.

So, I still see growth slowing, not contracting, but slowing both here in the US and globally. So, I still like being leveraged to growth themes.

JUSTINE UNDERHILL: All right. So, last time, you were here, you were looking at the IVW ETF, which represents growth in the S&P 500. Your target was 180, it hit that. But since then, it has pulled back, would you consider reentering this at current levels?

DAN RUSSO: I would have to do a little bit more work on it. But I certainly would consider reentering it just given I still see the theme in place, I still see a slowdown, not a contraction. And I think that investors will still pay a premium for growth, especially secular growth in the marketplace. But I also think that there are some opportunities to gain exposure to that theme at the sector and industry level as well, which we can go into.

JUSTINE UNDERHILL: Sure. And actually, before we go into that, I'd like to follow up on a previous trade you did as well, which was IYT that was focused on the transport sector. Could you give us a little bit of an update as to what's going on there?

DAN RUSSO: Sure. Yeah. That one was one that obviously did not work out unfortunately. I'd love to have 100% winners. But that's just not the case. I don't know anybody who does, I still think there are opportunities to the bearish side within transports. But investors need to get more specific, strength in the rails offset a lot of the weakness that I was seeing in the trucking stocks, and push the "entire group", transports higher. And that's where I got beat on the trade. But if we look at some of the names in the trucking portion of transportation, they still do look weak. And there are some opportunities there that we can maybe address at a different time.

JUSTINE UNDERHILL: Sure. Well, let's start talking about some of the sectors, overall sectors that you do see opportunity in.

DAN RUSSO: Sticking with the secular growth theme, a big part of our process at Chaikin Analytics is focusing on relative strength, or so we have a 20- factor model for rating stocks. And we use that model to then look for strength in the market at the different sector and industry levels. So, where I'm seeing strength right now is in software. If we look at the ETFs, the iShares, North American software ETF, the ticker symbol is IGV. It's been outperforming the market since the beginning of the year, really since December. So, as the market was bottoming on about Christmas Eve, software started to outperform.

So, we look for relative strength in the marketplace as a sign of opportunity on the long side of the portfolio, especially with the market shopping around right now. Key supported 2800 for the S&P 500 with resistance at 2900. So, in this hundred-point range, we really want to be focused on the relative strength and I'm seeing it in software, the IGV is the ETF that plays on that theme. If we'd look at the holdings, we can actually drill down and see within the holdings of IGV, how many of the stocks are rated bullish or very bullish in our 20-factor model? And how many are rated bearish or very bearish? And right now, the ratio is 3:1 bulls to bears. So, that gives me a lot of conviction that the relative strength in software and the absolute strength in software are likely to continue.

JUSTINE UNDERHILL: What are some of the factors that you look at in that model?

DAN RUSSO: So, we look at financial factors. We look at valuation factors. The traditional factors that everybody looks at, price to book, projected PE, earnings growth, earnings surprise, earnings trend. We look at what the analysts are doing- are analysts raising their estimates? Are analysts cutting their estimates? Are analysts raising their ratings? Are they moving from sell to buy to hold or vice versa? And there are 20 factors get rolled up every night and give us a rating on over 4000 stocks listed in the US.

JUSTINE UNDERHILL: Okay, so in the software area of the S&P 500, is there any one particular stock that you're looking at?

DAN RUSSO: Yeah, actually, I think Microsoft sets up really well right now. Currently, it has a very bullish rating in our model. It's been outperforming the market for quite some time and our proprietary overbought-oversold indicator is rounding out of an oversold condition and starting to move higher. At the same time, our measure of institutional buying and selling, the Chaikin money flow indicator created by Mark Chaikin, my boss- has been persistently bullish since the beginning of the year. So, that gives me a lot of conviction that Microsoft is likely to continue to perform well on both an absolute and relative basis.

JUSTINE UNDERHILL: And what would be the time horizon on that?

DAN RUSSO: Over the next three to six months.

JUSTINE UNDERHILL: In terms of risks, is growth picking up a potential risk to this trade?

DAN RUSSO: Yeah, we actually talked about that the last time I was here, and the risk at that time I thought was, if this is just a mid-cycle slowdown and then growth accelerates into the back half of the year, then perhaps investors will start to look for some of the beaten down value names, and shun some of the high growth and secular growth stocks. So far, I don't see that playing out. But it certainly is a risk. Also, the other risk is that this is not just a slowdown growth slowing but actually growth starts to contract, both here and globally. And that would lend to an entire risk off type situation across the market.

JUSTINE UNDERHILL: Now, Q1 GDP for the US came in pretty strong. Is that something that you're going to be watching for the next few quarters?

JUSTINE UNDERHILL: Okay. Now, what other sectors are you watching?

DAN RUSSO: So, the second part of the theme that we discussed when I was here last time was paying attention to yield plays or defensive plays. And a lot of that was in a slowing growth environment. I was making the case that it would be hard for the Fed to raise rates and that interest rates were likely going to head lower. That has largely played out as well, the 10-Year Yield now below 2.4%.

But what's interesting to me is just now, real estate is starting to outperform once again. It was outperforming throughout the fourth quarter of last year. And then as the market started to work higher this year, real estate started to underperform. It is starting to outperform again, if we look at an ETF like IYR, the iShares US real estate ETF- similar dynamics actually, to what we're seeing in software in terms of that bull to bear ratio based on what we're seeing in our model, not quite 3:1. But better than 2:1 bulls to bears, solid money flow telling us that institutional investors are gravitating to these stocks and that the trends are likely to continue.

And as I said, it's outperforming the market, so I think the real estate sector is a good place to go looking for long ideas as well, both for yield plays as well as just traditionally defensive plays.

JUSTINE UNDERHILL: What sort of stocks are you looking at on the real estate sector?

DAN RUSSO: So, we recently highlighted a stock called American Homes 4 Rent, the ticker symbol is AMH, trading around a $24 level, again, has a very bullish rating in our 20-factor model. It's outperforming the market. It's currently oversold based on our proprietary overbought-oversold indicator that we use for timing, Chaikin money flow indicator is bullish telling us that institutional investors are accumulating the stock. And there's a pretty good risk reward here. There's solid support at the $23 level. And I see upside to $30 over the next three to six months. So, $1 of downside for $6 of upside looks pretty compelling to me.

JUSTINE UNDERHILL: Do you like investing in the individual stock rather than the ETF? Or do you think it should be a mixture of both?

DAN RUSSO: I think it should be a mixture of both in my opinion. I think that you can use ETFs to set up your core strategic positions, and then look within those ETFs for individual names that are doing well to give you a little bit of a kicker or some juice to the upside.

JUSTINE UNDERHILL: What do you see is the biggest risk to this real estate trade?

DAN RUSSO: The biggest risk to any real estate trade usually is rising rates. But in this case, I also think a thawing of the trade war between the US and China that alleviates some of the defensive posture in the market would be a risk to real estate. But it's interesting- I was just reading over the past 12 months, the three best performing sectors of the market have been utilities, real estate and consumer staples. So, the defensive posture of the market is not new. It's been playing out for about a year.

JUSTINE UNDERHILL: Interesting. Can you summarize your trades in 30 seconds?

JUSTINE UNDERHILL: Great. Dan, thank you so much.

DAN RUSSO: Thank you so much.

Just remember this is a trade idea and not investment advice. You should do your own research, consider your risk tolerance and invest accordingly. For Real Vision, I'm Justine Underhill.