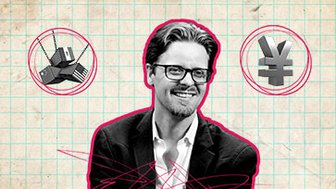 Jens Nordvig, founder and CEO of Exante Data, returns to…

Joe Perry, CMT, of ForexAnalytix, suggested buying the dip in the S&P 500 several weeks ago, and now returns to Real Vision to discuss how traders should play the current bounce. He highlights the impact of a dovish Fed, examines his charts using Elliot Wave analysis and Fibonacci retracements, and updates key levels for the trade, in this interview with Jake Merl. Filmed on June 6, 2019.

JAKE MERL: Welcome to Trade Ideas. I'm Jake Merl, sitting down with Joe Perry, Global Head of Business Development at ForexAnalytix and former FX and futures trader at Point72. Joe, great to have you back on the show.

JAKE MERL: So, you were here a couple weeks ago, and you suggested buying the pullback in stocks, buying the dip down to $2720 or so. We didn't quite get down there. But we have seen this rebound off those lows, can you please review what you're looking at for that trade, and give us an update if you're still in it?

JOE PERRY: Sure, there are a couple of things that we're looking at regarding that trade. Number one was that we had an ascending wedge formation. And we had that back in October. And we were calling for break lower out of it. And we did, obviously, and then now we have the same setup again. And we're looking for a break lower, or actually we broke lower. And then when I came in, we bounced a little bit, we're looking for a move lower to test that wedge formation because by definition, the retracement of a wedge is 100% of the wedge.

So, you're looking for that move, which will come in around $2720 as we had looked for. Also, we had AB out of formation, we bounced a little bit so we're looking for CD to form which would just be taken the length of AB, extending it from the bounce off of the B lower down to CD. And that also arrived at the same point. And it was also the .32 retracement level from the lows of 2019 back up to the highs that we recently had.

So, also looking at Elliott Wave, we traded five moves into the high that we had. And we made our ABC correction lower into that support level. And now, we're looking to move higher out of that up towards the $3050 level.

JOE PERRY: Yes, we did scale into that trade. Because as I mentioned, if you had wanted to, you could buy micro E-minis, which are 1/10th the size of an E-mini and you could scale into it that way. So, yes, I did get into the trade at a higher average price. We don't have the full size position on, however, we are in the trade and it is moving in our direction.

JAKE MERL: And you're currently in it right now, right?

JAKE MERL: And so, what's your target on the upside? I believe last time you were expecting note $3050.

JOE PERRY: Right. So, we're looking for new highs. There's a lot of liquidity above these highs, because a lot of people put stops up there. Anybody who's shorted on the way down would put their stop up above the high. So, I think if we break above those highs, we'll probably trade for a couple weeks up there or so, maybe up to around $3050. And then I think we're going to roll over again. The timeframe I think I gave was three months. And I think through the summer is probably a good timeframe into the fall where we may roll over and head lower.

JAKE MERL: So, you're not at all worried about what the bond market is saying right now? Yields are tanking. And we have the trade war looming. You're not worried about that at all?

JOE PERRY: Well, actually we had those same things last time when I was on. And the Fed came out the other day, Powell came out and said, we're going to act as appropriate to sustain expansion. So, what does that mean? It's permission to buy stocks. So, the market's buying them and we're moving higher.

JAKE MERL: So, Joe, would you be raising your stop loss here as well, because I believe last time your stop was around that $2670 level?

JOE PERRY: Yeah. So, we had a pretty aggressive move off that low, we put in a hammer down at that $2730 level. And we traded pretty aggressively higher, most likely, these things don't happen in a straight line. So, we're going to have a lot of sideways price action is my guess over the next couple weeks or months leading up to that $3050. So, I definitely raised my stop to around $2750. That is right below the top of the hammer formation that we put in a couple days ago.

JAKE MERL: So, Joe, do you recommend getting involved here at current levels? Or would you be waiting for a pullback?

JOE PERRY: So, we moved 110 handles in the last four days, pretty far, pretty fast. The RSI you could see is very close to overbought levels, we are moving into some resistance. I would look for a pullback here, possibly down to $2800. There's some support there at $2790. And that's where I would be looking to get in if I wasn't in this trade already.

JAKE MERL: And so, Joe, what would you say is the biggest risk your bullish outlook?

JOE PERRY: Well, we are trading up into resistance right now. We're back in that range that we had earlier, I think the last time I was on. You could trade lower from here. That's a possibility. But that's one of the reasons I think we may trade sideways through here and just grind higher through there. Also, somebody else in the Fed could come out and say, oh, I'm really hawkish right now and forget what everybody else said- and that could push lower and also, maybe something negative from the G20 regarding China and the US and that could push stocks lower as well.

JOE PERRY: Thanks. Always good to be here.

That was Joe Perry of ForexAnalytix. And for Real Vision, I'm Jake Merl.