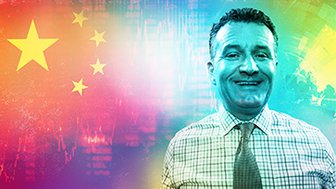 John Roque, CMT, has developed his own price-based indicators over…

The Price Action is Right

Steve Strazza, co-founder of The Chart Report, makes his debut on "Trade Ideas" with a bullish call on Church & Dwight. In this interview with Justine Underhill, Strazza breaks down the technicals that have him bullish on the consumer staples sector relative to the S&P, as well as his parallel reasoning on Church & Dwight relative to the sector. Filmed on March 29, 2019.

JUSTINE UNDERHILL: Welcome to Real Vision's Trade Ideas. Today, we're sitting down with Steve Strazza of the Chart Report-- great to have you here.

STEVE STRAZZA: Glad to be here.

JUSTINE UNDERHILL: So this is your first time on Trade Ideas. Can you give us a little bit of your background?

STEVE STRAZZA: Right. So my name's Steve Strazza. I began my career as a Big Four CPA, auditing some of the largest broker dealers and banks on Wall Street. I moved to the hedge fund industry for a few years, which is really where I found my passion for markets.

And most recently, I started a venture with some colleagues called the Chart Report where we basically strive to curate the best research in the field of technical analysis for our viewers and pretty much just serve it to them on a very snackable clear and concise way.

JUSTINE UNDERHILL: All right, so what are you looking at today?

STEVE STRAZZA: So some of the themes that we've really been hitting on and covering at the Chart Report in the past couple of months is the safety trade, which is basically the new highs that you're seeing in sectors, like utilities and real estate-- more defensive sectors of the market. And also, the collapse in bond yields that we're seeing not just in the US, but, actually, this is a global trend.

You're seeing the 10-year rollover in most developed markets. And then in the US in the past month, we've seen the 1-year, the 2-year, the 5-year, the 10-year, and the 30-year all make new 52-week lows. An environment like that, you tend to want to err away from these cyclical stocks and more towards the risk averse sectors, like utilities, real estate. And then we also have staples.

So they wanted to point out today was that we're starting to see some rotation into staples. I brought a chart that shows the Excel P/E relative to the S&P 500. And in the lower panel, that chart is the 10-year yield inverted. And what this chart is basically showing is that staples tend to outperform the market, an environment where we're seeing falling yields.

So that ratio trends with the 10-year. And I inverted it. Right now, it looks like the 10-year is breaking out. But it's actually breaking down. And staples are moving higher relative to the S&P.

JUSTINE UNDERHILL: So this is really signaling that we are moving into a risk-off environment right now.

STEVE STRAZZA: We're in a total risk-off equity environment. Yes, risk aversion is here. And that makes a lot of sense, because when we're in a market where the yield curve is just inverted, and we're having recessionary fears, you want to be in not just the safest names, but you start to see investors reaching for yield.

They want to be in lower volatility sectors, like REITs, utilities, and staples. And they also like the kind of stability, slow but stable growth that those sectors offer.

JUSTINE UNDERHILL: OK. So if you are looking at staples, what specific stocks would you be looking at there?

STEVE STRAZZA: So in staples, first of all, if you just look at the returns over the past week, staples have led. They've led all sectors. And then if you look at the past month, it's really been staples, utilities, and REITs. But another idea I want to hit on here is that this is nothing new.

This is something we've been seeing for actually 6 months since before the sell-off began in Q4 of last year. So you look at the 6-month returns in my total return matrix, the only sectors that are positive over the trailing 6 months are these three defensive sectors. So this is something that's been going on. And we expect it to continue to go up.

When you see a sector, like you're currently seeing staples move up and to the right with momentum, that means that it's moving up, which the y-axis is measuring the momentum of its relative strength versus the S&P 500. And then moving to the right side of the quadrant onto the leading quadrant means that it's actually exhibiting relative strength versus the S&P 500. So the way that that XLP line looks on the relative rotation graph is about as bullish as it gets. That's what you want to see.

JUSTINE UNDERHILL: So then in XLP itself, what names?

STEVE STRAZZA: Well, we always use a top-down approach. We want to be in the strongest names and the strongest areas of the market. So now that we're seeing the rotation into staples, I went back. I looked through my chart book of staples names. We're seeing large caps, like Pepsi, Hershey, Mondelez, all hitting new all-time highs recently-- Procter & Gamble.

But another one that doesn't get talked about as much is Church & Dwight's, ticker symbol CHD. If you look at its relative ratio compared to the S&P 500, it looks a lot different than the XLP relative to the S&P 500. And what that's showing you is that all the staples sector is pretty much stagnated since prior to the great financial crisis. It's still basically at similar levels if you look at that chart.

Church & Dwight has been stair stepping higher verse the S&P this whole time. Now, that we're seeing a rotation back into staples, we want to be in those strongest names. So Church & Dwight just made a new relative high versus the S&P, I think, late last year. It came off a nice support level right now. And it's rising again.

It's in a bullish momentum regime. And then if you look at the price chart on an absolute basis, Church & Dwight is also breaking out to new all-time highs on absolute basis. So everything is working. That's the kind of name that we want to be in.

JUSTINE UNDERHILL: OK, so then what levels would you be looking at for Church & Dwight?

STEVE STRAZZA: So Church & Dwight made a new all-time high maybe a couple months ago around $69. But it's really been consolidating in a range for the past 5 months that it just broke out above 69. We want to basically set our risk at prior all-time highs using the principle of polarity, which is that prior resistance turns into future support.

Now that we're above 69, I would buy any weakness back towards that level. You want an entry as close to 69 as possible. Because we're in a choppy market with a sideways 200-day moving average, you want to allow for whipsaws. You don't want to be shook out of your position. So you want to give about 5% to the downside.

JUSTINE UNDERHILL: OK, and what's your time horizon on this?

STEVE STRAZZA: I would give it about 3 to 6 months.

JUSTINE UNDERHILL: OK. Do you see any major risks to this trade?

STEVE STRAZZA: The major risks would be basically if the stock was to roll below its prior all-time highs, you want to be very cautionary there. The reason why we're giving it to $65.50 is because we don't want to be whipsawed out of it. But you can always get out below $69, and then re-enter when the stock moves above $69. We really do want to be buying strength. So as long as you respect your risk management levels, you should be fine.

JUSTINE UNDERHILL: OK. And you're looking at this purely from a technical perspective. Are there fundamentals here that you look at, as well, or no?

STEVE STRAZZA: It's past my pay grade. We try to ignore the fundamentals. That's noise to us. We just follow price, because that's what pays you at the end of the day.

JUSTINE UNDERHILL: All right, can you summarize this trade in 30 seconds?

STEVE STRAZZA: Absolutely. We want to be buying Church & Dwight above $69. Hopefully you get a little bit of weakness on a pullback backs. That's $69 level. And we want to be taking profits at $83. And we want to be limiting our risk to about 5%, which would be stopping ourselves outrun the $65.50 level.

JUSTINE UNDERHILL: Great, Steve, thank you so much.

STEVE STRAZZA: Thanks for having me on.

JUSTINE UNDERHILL: So Steve is bullish on consumer staples. Specifically, he likes buying Church & Dwight, ticker symbol CHD between $69 and $71 with a stop loss at $65.50 and a target of $83 over the next 3 to 6 months. Just remember that this is a trade idea and not investment advice. You should do your own research, consider your risk tolerance, and invest accordingly. For Real Vision, I'm Justine Underhill.