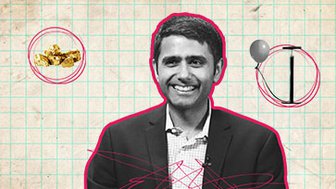 Ankit Sahni, president and head of research at Exante Data,…

Gold: How Much More Upside?

Howard Penney, sector head of restaurants at Hedgeye, breaks down the transformations in the food-delivery space and highlights one particular company that’s feeling the heat: Domino’s Pizza. In this interview with Jake Merl, Penney explains how companies like GrubHub are eating Domino's lunch, discusses the issues with Domino's "fortressing" strategy, and presents a pairs trade to play the situation. Filmed on August 28, 2019.

JAKE MERL: Welcome to Trade Ideas. I'm Jake Merl, sitting down with Howard Penney, Sector Head of Restaurants at Hedgeye. Howard, it's great to have you back on the show.

HOWARD PENNEY: Thanks for having me.

JAKE MERL: Let's get right into it. What stock are we looking at today?

HOWARD PENNEY: My favorite short idea in this space, Domino's.

JAKE MERL: Domino's has actually had quite the run over the past 10 years. They've absolutely crushed it with their delivery service. However, over the past year or so, they seem to be running into some issues with growth and also competition. Can you please walk through the bear case for Domino's, and why you think they're running into some trouble?

HOWARD PENNEY: Sure. It actually started overseas, where digital ordering is 2 or 3 years ahead of where we are in the United States. So the competition from Just Eat and some of the Grubhub equivalents in Europe is eating into Domino's competition over there and making it more difficult for them. That is now making its way to the United States with Grubhub and Postmates and Doordash and UberEats are taking a lot of incremental market share from the delivery market, or the delivered pizza market or whatever, if you want to look at it that way.

JAKE MERL: In terms of competition with these companies like Grubhub and Postmates, are those business models even profitable? Like how much of a threat are they actually to Domino's overall business?

HOWARD PENNEY: Well, it's interesting you asked that question because the Domino's CEO is basically saying it's not sustainable, that these business models aren't sustainable. And there's an aspect of it that's probably true in the sense that the money that's flooding into these companies today are allowing them to provide free delivery and excessive discounting, if you will, in the sense of free delivery and free offers and whatnot. But in terms of the shift, the secular shift of people eating at home, people want a restaurant quality meal, but they wanted at home. And that's not going to stop like that is going to be there.

Now, the question of whether these companies are profitable or not, is a separate issue. Now, Grubhub is definitely profitable. $220 million in EBITDA or something like that. So I guess the best way to think about it is there's this mutual share destruction that is now pervasive in this business model of delivery.

JAKE MERL: So even though delivery is strong in general and people are demanding delivery, Domino's is losing market share as these new competitors come online?

HOWARD PENNEY: If you think about it, Domino's has a great run for 10 years, as you said. Literally the only thing you could get delivered to your house was pizza. Now, you can give the babysitter on a Saturday night 40 bucks and they could get a sandwich, they can get pizza, they can get Chinese food, you can get hamburgers, you can get anything delivered today. So Domino's had the business model that was dominant market share in delivery. And now, they're just losing share.

Now, that's going to lead to another problem. And the other problem is that they're growing units too fast. So as same store sales slow, and this is just the beginning. This is why we're talking about it today. Because I think the issues that have present itself from a sales standpoint are going to manifest itself into unit profitability for the franchisees and the company is calling it fortressing. So as they open up- and that's a fancy term for cannibalization and they're doing it all over the world. And as they sell slow and they accelerate their units, the franchisees are getting angry, or going to get angry. And that's what you're seeing overseas.

It's easy for the franchisees to be happy when same store sales are 7%, 8%, 9%, when same store sales are flat to one to two in inflation, labor inflation or food inflation is 5% to 6%, then their margins start declining. And then when their margins are declining, because the sales aren't there and then you layer on more stores, because you've got- the company wants to open up more stores because they feel like they have white space available to them, that complicates the franchisees' profit experience margins.

JAKE MERL: And so what happens when the franchisees become unhappy? What happens to Domino's overall business?

HOWARD PENNEY: Well, that speaks to their ability to open up stores. And so what we care about, and what we look at is rate of change. The rate of change is slowing for same store sales, and that's going to manifest itself into a slowing of the unit growth. So that's why the stocks going to ultimately go lower from here, because they have to slow unit growth over time. Now, that's not in it today. And people aren't talking about that today. But that's where this will go ultimately.

JAKE MERL: And how much lower do you see share prices going? Because they just reported earnings last month, the stock fell off the cliff. So what are you expecting from here?

HOWARD PENNEY: We look at $180 as- it's $225, I think something like that today. I look at $180 and then if it gets there, we'll reassess it because it could go to $150. But we'll see what the dynamics are and what the trends look like when it gets there. But it could go lower than that. But right now, I'm just thinking $180 is where it's headed.

JAKE MERL: For that $180 price target you have, how did you come up with that target? How do you value Domino's?

HOWARD PENNEY: : I'm looking at Domino's. One of the things that has occurred in the last couple years is all these asset-like business models, McDonald's, Yum, Domino's are trading at egregiously high multiples. I think Domino's is 18 or 19 times cash flow EBITDA on the next 12 months basis. And almost 30 times earnings. 6 or 7 years ago, that was probably 12 times and 15 times or 20 times. So I think the number you can get somewhere around $9.50 in earnings times 20 multiple, round numbers will get you to $180. And that's what I'm looking at.

I think the street is $9.50 in earnings, I'm a little lower than that. So a more normalized multiple on that would get you to buck 80. Now, again, that $9 or $9.50 in earnings could be lower if I'm right about the unit growth slowing and the comp slowing then that $9 might not be the right number, and it might be $8. So it could be $160 if you use that same multiple. So that's roughly how I get there.

JAKE MERL: And what would you say is the biggest risk to your thesis?

HOWARD PENNEY: That the same store sales reaccelerate. One of the things they did yesterday was announced a 50% discount. So basically, if you buy a pizza online for the next week, you can buy it at half off. So that's a good deal that could accelerate same store sales. I think this might- this thesis that I have this been around- I've had it for a year, a little over a year now. And it's really just now manifesting itself, but it will have iterations based on what the company does.

But if I'm wrong about the competition, as you alluded to earlier, that maybe the business thoughts aren't sustainable. That's another piece of it, that might go against me, but for the time being, the people that have funded Doordash to be a $14 billion company is a private unicorn, they're not going to go away. They want that company, they'll ultimately become public so they can make money.

JAKE MERL: Speaking of Doordash and these other third party delivery services, would you be looking to do a pairs trade, short Domino's and long one of these disruptive companies?

HOWARD PENNEY: Well, the only one you can play effectively today is Grubhub and we are long Grubhub. I think that it is real. Again, the restaurant industry is a $700 billion- the food away from home as a $700 billion market. I think delivery is call it $25 billion, $30 billion today, going to go to $200 billion. And so you've got this massive shift in how consumers are going to consume food and Grubhub will be one of the best stocks position to do that.

JAKE MERL: And how much upside are you expecting for Grubhub?

HOWARD PENNEY: I could double easily. Look at it this way, Grubhub is a, round number, $5 billion company and it makes money. Doordash last funding round was $14 billion. And Grubhub has more market share than Doordash. So it's why shouldn't Grubhub a $10 billion company.

JAKE MERL: If we take a step back and look at the broader picture, how are these third party service providers affecting the entire restaurant industry?

So what's happening now is- and that there was an article just the other day, I forget the gentleman's name, he'd founded Uber, but he's now founded another company called CloudKitchen. And there are cloud kitchens or cloud restaurants or effectively restaurants that are built, purpose built for delivery, meaning their margin structure is such that it can accept the fee, the delivery fees that UberEats or Grubhub will put on the restaurants, because the restaurant company runs on low margins anyway. So they're complaining about the fees that a Grubhub and an UberEats and the Doordash are paying them.

So it's disruptive in a number of ways. One, people want to eat at home and they're not wanting to go out to eat. You're having to pay that fee. But two, now there's a whole new type of restaurant being built and that's called cloud kitchens, dark kitchens, however you want to look at it. So there's a big evolution or a big shift in the restaurant industry today.

JAKE MERL: Well, Howard Penney, long disruptors, short the disrupted. We'll see how it plays out in the months to come. Thanks much for joining us.

HOWARD PENNEY: Thanks for having me.

JAKE MERL: Howard is bearish on Domino's. Specifically, he likes shorting ticker symbol DPZ at current levels. He thinks share prices could reach as low as $180 over the next 6 months. In addition, Howard is bullish on Grubhub. He likes buying ticker symbol GRUB at current levels. He thinks the stock price could double over the next 6 months.

That was Howard Penney of Hedgeye. And for Real Vision, I'm Jake Merl.