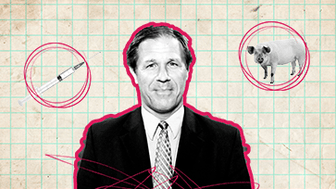 Shawn Hackett, president of Hackett Financial Advisors, breaks down how this year's harvest for corn and soybeans is at risk of major frost damage. In this interview with Jake Merl, Hackett walks through how weather patterns and solar cycles historically influence crop yields, discusses the severity of the current situation, and reviews how traders can take advantage of the rare setup with a particular grains ETN. Filmed on August 30, 2019.

JAKE MERL: Welcome to Trade Ideas. I'm Jake Merl, sitting down with Shawn Hackett, President of Hackett Financial Advisors. Shawn, great to have you back on the show.

SHAWN HACKETT: It's always good to be here.

JAKE MERL: Let's get right into it. What are we talking about today?

SHAWN HACKETT: We're talking about a very unusual situation that only comes around maybe every 20 or 30 years. And that's a frost risk potential to the US green crop. In order to have a frost risk, you have to have a late developing crop, that usually means a late planted crop. This year was the slowest planting season we've had in history, and because of that, of the tremendous flooding the tremendous rains that went all the way into June, we planted a record amount of soybeans and corn acres in mid to late June than ever before.

As such, our current development is in the top five slowest on record. Because of that, we are going to need a longer end to the growing season to finish the crop out, to have the crop mature so that it can yield its full potential. If that does not happen, and you junt it or stop it from finishing out, there's all kinds of yield quality and disease problems that can emanate. So this year, because of that alone, we are in a very unusual situation with, that is possible this year.

JAKE MERL: What would make that possible? What are the catalysts for that?

SHAWN HACKETT: Whenever we look at-- whether we try to look at historical context correlations, so there's some big picture features that have historically met earlier frost dates a knot. One is where are we in the solar cycle? There's an 11-year solar cycle, we go from high sunspots to low sunspots at the trough periods have tended to be greater correlations to earlier frost states in the Midwest. We are in a trough period. We also happen to be in what's called a grand solar cycle minimum, where we have an overall longer period of lower sunspots, which tends to amplify normal behavior that will also help it.

Also, we're seeing a significant weakening El Nino. In fact, it's actually acting more La Nina like. Whenever that happens, it also increases the odds of a colder weather pattern in the Midwest. Finally, we look at something called the 18.6-year lunar cycle, and that's essentially when the moon oscillates between 18 degrees off of the equator to 28 degrees. That difference changes the forces on the ocean and makes the oceans move in different ways and it impacts the weather quite significantly. There's a very high correlation where we are now when we're at this part of the 18.6-year lunar cycle for increased early frost risks.

So from a big picture perspective, we have a lot of reasons to think that the odds are higher this year than not that we're not going to have a long end of the season, we're going to have a short end to it and a potential early frost date.

SHAWN HACKETT: Right, not only that you have a late developing crop, but you also have to be at the right time for all these other factors to come into play. When we now say, okay, here we are, late developing crop, we have these bigger factors that are in play, how do we monitor and micromanage it on a day to day, week to week level to see if we're getting something coming up?

Right now, from the latest weather models that we follow, we're looking at a mid-late September as a higher risk point where all these oscillations are going to be in their negative phase, pushing this cool air into the Midwest. It doesn't mean it guarantees it, but it says that we should really be on the lookout for some unusually cold intrusions of air into the Midwest where the crop is way behind.

JAKE MERL: Based on everything you've laid out, would you be expecting higher crop prices, whether it's corn, soybeans, or what specifically are you looking at?

SHAWN HACKETT: If we get a significant frost that comes in and stops the crop from finishing out, then we're going to have to start moving our crop production numbers down significantly. Yield down, harvested acres down, and obviously, our overall supply is down and the market will have to react very violently. Remember what happened at the beginning of the spring and summer when we had this delayed planting, prices for corn, for example, went from 340 up to 480 in a matter of 3 or 4 weeks because the market was pricing at a lower crop, we would have to do the same thing all over again but for a different reason.

JAKE MERL: How do you suggest traders and investors play the current situation?

SHAWN HACKETT: We think sometimes, simple is the best modus operandi here. Sometimes complication gets in the way. We think a very easy, simple way to do it is simply to own a grain ETN as they call it, exchange traded note. In this case, our preferred one would be GRU. We think that that just owns corn, soybeans and wheat and you'll be able to participate in the entire move in the grain complex. You don't have to try to pick one over the other or something like that, or try to do a futures or options and get the timing wrong. We just think you just want to own this into the end of the year. We think there's a good chance that you could get your 30% or 50% move in grain prices if this frost scenario were to play out at all.

JAKE MERL: Just in case things don't go your way, and it doesn't play out, would you have a stop loss on the downside?

SHAWN HACKETT: Correct. Because really, an early frost date means between September 15th and October 15th, and if it happens afterwards, it'd be a minimal impact. We view that as a demarcation line in the sand for this trade.

JAKE MERL: Shawn, there's been a lot of news that there's been high temperatures specifically in the Arctic, there's ice melting, and there's climate change, global warming, how does that affect your thesis?

SHAWN HACKETT: It actually enhances the thesis. In years where there's low sea ice during the summertime enhances cold air intrusions into the Midwest and the reason is basically this, when you have low sea ice levels, the ocean in the Arctic absorbs more of the sun's energy. As we start going into the cooler phase of September and October, the eastern Arctic freezes very quickly, but the Western Arctic stays warm, and it develops has high pressure system over the warm region that spins around and actually helps funnel even more cold air down into the Midwest.

What may seem like something that could actually make a warmer trend, it actually does the exact opposite throughout history. It actually enhances the cold air and chooses by the nature of how it impacts the airflow. In this particular instance, the last time we had this was in 2012 when we had low sea ice, and we had very, very early frost dates that year. But of course, the crop wasn't delayed, so we had no problem.

JAKE MERL: Well, Shawn, we'll see how it turns out in the months to come. Thanks so much for joining us.

JAKE MERL: Shawn is getting worried about a frost risk for crops. Specifically, he thinks the Green Index, ticker symbol GRU, could rise 50% over the next 4 months.

That was Shawn Hackett of Hackett Financial Advisors and for Real Vision, I'm Jake Merl.