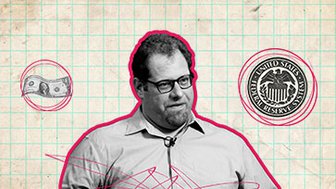 The Next Step for Central Banks

Joe Perry, CMT, of ForexAnalytix, reviews his trade on the euro from last month and considers a different way to play the situation via the British pound. He outlines the technical setup for EUR/GBP using Fibonacci retracements and Elliot Wave analysis, notes key levels that traders should pay attention to, and considers red flags to the thesis, in this interview with Jake Merl. Filmed on July 8, 2019.

JAKE MERL: Welcome to Trade Ideas. I'm Jake Merl, sitting down with Joe Perry of ForexAnalytix. Joe, great to have you back on the show.

JOE PERRY: Thanks. Always great to be here, Jake.

JAKE MERL: So, you were last here about a month ago going long the Euro against the dollar. It looked like it was breaking out around 1.13 or so, but then it quickly reversed, and you got stopped out within a week right after the interview. I know that was just a short term trade that didn't work out. However, I believe for today, you have another trade on the Euro, except this time, you're going short. Can you walk us through exactly what you're looking at?

JOE PERRY: Sure. Well, going back to that last trade, that was mainly the dollar index trade that I was looking at to move lower. And because 63% of the dollar index is made up of the euro, I was trying to play the Euro long to take advantage of that move, I was looking for a lower in the dollar index. So, you're right. It did move lower quickly, we got stopped out, then it did go up actually to 1.14 right from there, but it didn't go to the target I was looking for of 1.1550, which tells me that it's weak overall, because it didn't even reach up to that 1.1550 level, which is in the middle of that 1.18, 1.12 level that we had been in for a really long time. So, today, I'm looking to short the euro.

JAKE MERL: And so, actually, just to back up a bit, you've actually been a dollar bull, bearish on the euro for the better part of the past six to nine months. You've actually first been on Real Vision last fall. And it was actually just last interview, a month ago, where you put on a short term countertrend trade. And now, it looks like you're going back to your original thesis where you're bearish on the euro. And now, it looks like you're looking to play it against the British pound. Is that right?

JOE PERRY: So, the reason I'm not playing the dollar today is because of Powell speaking on Wednesday. And because the payrolls were strong out of the US the other day, you could go either way, or you could stay neutral. So, I want to stay away from the dollar, at least for the next couple days. And not go near that.

But when you look at the Euro against the pound, there are a number of things going on there. The data actually out of the UK has been okay, hasn't been great. It hasn't been bad, but it's been pretty stable. You have obviously the ongoing Brexit negotiations, and now, they're looking for a new PM. However, these trades, actually, that I'm looking at now is only a month-long trade. So, unless something comes out where Brexit doesn't happen within the next month, then I think that's trigger it to go short, your Sterling is going to work out.

JAKE MERL: So, what are some of the specific technicals you're looking at right now?

JOE PERRY: Well, originally back in 2015, we put in a double bottom in euro-Sterling and we had a 1, 2, 3, 4, 5-wave move higher. And since then, in 2017, we started trading sideways, almost flagging, but it's been a very long, two-year flag. Lowest put in 2019 at 0.8543. And now, it's trading up and we're back near the top end of the trend line on a weekly, we're putting in a pin bar which is showing there's not much movement there as we're sitting at the top of that trend line.

So, as we're sitting there, and you resume it now on to the daily, you could see that we came off that low in May of 0.8513, traded higher to up where we are now which I was just saying that trendline that goes all the way back to 2017. Also, we're putting in an ascending triangle right here near the top. And I love trading at ascending triangles. The target of an ascending triangle is to retrace the whole ascending triangle and the target for that is 0.8050. However, I think it's going to go lower, I'm looking at 0.8750, which is actually 50% of the range we've been trading in for that whole time.

Also, within that ascending triangle, there's what's called a three-driver pattern. And that's when price puts in three new highs but the RSI puts in three lower highs, and there's a high probability that price will roll over when you see that and down at that 0.8750 levels, also the 200-Day Moving Average so 50% retracement of the range we've been in. And the 200-Day Moving Average coming around that level. Seems like it could be a good spot for to target.

JAKE MERL: So, you mentioned the ascending triangle and also the three-driver. Are there any other technicals you're watching that's confirming your thesis?

JOE PERRY: Well, if you look at from a harmonics perspective, you could see that we are trading back up towards the 88% retracement level from the highs of 2019. At that 80% retracement level, we're looking to turn lower there. And as that happens, that will be a bearish bat pattern. And, again, 50% is one of the targets of a bearish bat pattern. So, that would come in right around that same level.

Also, from an early wave perspective, we're at the end of a bigger Wave 3 reversal pattern, which is labeled a leg D of a bigger triangle pattern. And as that rolls over, it's also targeting down like 0.8730 or so. So, that's right around that general area of 0.8750 that we're looking for.

JAKE MERL: And so, what key levels would you be looking at to make the trade?

JOE PERRY: So, I'd be looking to get in at the market, which today is right around 0.8970. I'm going to have a tight stop on it, though, up around 0.9022. However, if it does break through there, I'd be looking to get short again, up around 0.9100, which is the highs from earlier in the year. Target on a downside is 0.8750 as I've been saying, and I think that if it does happen, it's going to happen quickly. Probably within a month or so.

JAKE MERL: And what would you say is the biggest risk to your trade?

JOE PERRY: The biggest risk is that the ECB comes out and begins with this less dovish speak than they have been. The data may come out a little better over the course of the next month, which may push the Euro a little bit higher. Something may happen over the next month and Brexit is done and over with and everything's great. So, that would be some of the things.

JAKE MERL: And so, we do have an important Fed meeting coming up at the end of July. And I know this play isn't on the dollar specifically. But how do you think the Fed meeting could impact your thesis?

JOE PERRY: One of the reasons I'm trying to stay away from the dollar here is because of Powell speaking, the Fed coming up. However, I think a lot more is going to depend on what happens on Wednesday from what he says and then the data releases in between there because they have said that they are data dependent. So, getting that far out for me is a little too far for me to start thinking about the dollar again.

JAKE MERL: All right, Joe. We'll see how it plays out in the weeks and months to come. Thanks so much for joining us.

JOE PERRY: Thanks. Appreciate it.

JAKE MERL: So, Joe is bearish on the euro. Specifically, he likes shorting the euro against the British pound at current levels with the stop loss at 0.9022 and a target price of 0.8750 over the next month. That was Joe Perry of ForexAnalytix and for Real Vision, I'm Jake Merl.