Unlocking Value in a Beaten-Down REIT 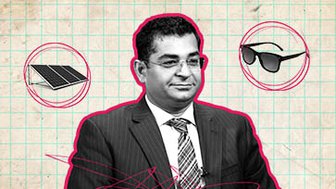 Solar stock Sunrun has nearly doubled since the start of…

Unlocking Value in a Beaten-Down REIT

John Jannarone, editor in chief of IPO Edge, believes that shares of Colony Capital could double from current levels. He runs through the company's struggles in recent years, discusses why the undervalued stock may finally be ready for a turn higher, and reviews exactly how to trade this beaten-down REIT. Filmed on July 22, 2019.

JAKE MERL: Welcome to Trade Ideas. I'm Jake Merle, sitting down with John Jannarone, editor in chief of IPO Edge. John, great to have you back on the show.

JAKE MERL: So, what are we looking at today? What's your trade idea?

JOHN JANNARONE: Well, my idea today is Colony Capital. This is an interesting company. It's real hodgepodge of different assets and structured as REIT. What happened is, in early 2017, the current company was formed through a three-way merger. And it was pretty much a disaster from the beginning. The stock was trading around $15 then and it fell off a cliff almost immediately. It's now around $5 a share. So, it's down 60%, 70% in 18 months or so.

JAKE MERL: So, what's happened over the past few years that this company has actually struggled so much?

JOHN JANNARONE: Well, I think that the whole merger was misguided to begin with. They were talking about top notch governance and synergies happening and it just didn't materialize. They've struggled and in the beginning, they blamed some of the legacy assets from the other two companies that were part of the merger. But the reality is that these things don't really match up that well, they'd probably be better off separate.

JOHN JANNARONE: Well, what happened earlier this year is an activist investor, Blackwells Capital, got involved, and they convinced the company to undergo a strategic review process, which they've been doing, though not much has happened yet. However, they've also put on three independent directors who are good people, and I think experienced in real estate and probably have the right approach. But what I'm predicting will happen and this is based on my sources who are close to Blackwells is that if the company doesn't do something drastic, like start selling some assets, run a real auction process, they're going to try to replace the remaining directors and board.

JAKE MERL: So, essentially, are you saying that the value of the assets are disconnected with the actual share price?

JOHN JANNARONE: Yes, absolutely. So, it's trading a little bit over $5. But based on the sum of the parts analysis that I did, and I went through very meticulously through all seven different groups of the company, the thing is worth, I think, at least $11 a share. And that could be a result of a number of things, someone could buy the whole company, or it could be broken off into little pieces, or someone could buy half of it. And if you look at these assets, and you put reasonable multiples on them, there's a lot of value there. So, it's trading at a very steep discount.

JAKE MERL: So, can you please break down some of those assets? And why you're so bullish?

JOHN JANNARONE: Yeah. So, let's just take one of the REIT assets. So, there are three REIT within this REIT. And one is- that's most interesting to me, I think, is the industrial REIT. And these are real hot thing right now. It's not the sexiest topic, I guess. But it's just warehouse space. But it is a big deal, because people are doing Amazon stuff. So, more and more retailers are storing in massive facilities, rather than having storefronts, and they're getting shipped out. So, they're trading at very, very low cap rates, which means you see if you flip it over at cap rates at a high multiple, so if you put a reasonable cap rate comparable to some of the recent transactions, that's a pretty valuable asset.

JAKE MERL: So, what other assets are you looking at?

JOHN JANNARONE: Well, the other one that I think is interesting is the asset management piece. So, that's like a Blackstone or an oxidative where they are the company that manages assets. And there are a few of those at trade. And what's interesting is that there are a few other players out there like say Carlisle that doesn't have much in the way of real estate focused asset management. So, a Carlisle might say all of the sudden, we can become more like Blackstone if we pick this thing up. By the same token, Blackstone might just want more real estate. But I think that the brand of Colony Capital is still strong. And that asset manager really should be getting more value than it is in the market right now.

JOHN JANNARONE: Well, this company's been around for quite some time. And I think it's 20 or 30 years. But in its current form, the most drastic change that's happened recently is the deal they closed in early 2017. That was two different also listed companies, which had a hodgepodge of assets. And that's how you wound up with this thing that's got a lot of traditional REIT kind of real estate. But then there's also- I didn't even get into this other part, there's this just lump of LP interests and all kinds of different funds. So, this is a very, very diverse company. And I think that's part of the reason why it's misunderstood. You get three sell side analysts who looked at it, and it doesn't really fit in any industry group so it's a little bit lost out there.

JAKE MERL: So, you're saying when you add up all these different parts of the business, you get $11 per share, not $5 per share. So, what's the catalyst that you see it getting to $11 per share?

JOHN JANNARONE: Well, I think that the pressure from Blackwells, the activist, is really enough to be a catalyst. My hunch is that these guys are probably going to start selling something in a significant way. I have a source close to Blackwells who also told me that the steps they've taken so far, which is to sell a little bit of real estate, which happened in the last few weeks, actually, since my article posted, is not sufficient. They want much, much more significant change. I think they want to see this thing approaching what the sum of the parts value is and that's over 100% higher than the current price.

JAKE MERL: And so, in terms of timing, how long do you see this playing out?

JOHN JANNARONE: Well, so we can get big good news any day now. But the reality is that come October, November, that's the director nomination window. If these guys have not done something that makes Blackwells happy, the rest of the board could get pushed out. And I could see them winning that proxy fight. This thing is- even the analysts who don't love the stock have an NAV, a net asset value, considerably higher than this, not $11 a share. Mine's more bullish than theirs is. But you've got some pretty disgruntled investors out there. So, if they don't get their act together, the rest of the board, including the chairman, Tom Barrick, who founded the company could lose a spot. So, this is serious.

JAKE MERL: And so, in terms of putting on an actionable trade idea, how do you suggest traders play the current setup?

JOHN JANNARONE: Well, look, Jake, the thing about this that I really like is that the downside is super limited. And this thing yields around 10%. So, especially with interest rates going down, it can't fall that much more. Maybe you could argue some of their assets need to be marked down a little bit. But the downside is pretty limited. So, I would just say you are long the comp stock.

JOHN JANNARONE: Well, I think the biggest risk is that we get into a nasty fight. And then that could last a while. So, I did say that I think that if there was a proxy fight, the Blackwells would prevail. But it can take a long time. There could be a lot of back and forth. And my guess is that the CEO, Tom Barrick, is not going to be happy if he has to- if he has someone who tries to take his company away from him.

JAKE MERL: And would you have a stop loss, just in case things don't go your way?

JOHN JANNARONE: Yeah, I suppose so. But like I said, I think the downside is limited here. I just if it went- if things really started to fall apart and fell to $3.50 or something, I guess I'd cut my losses, but I really don't think that's going to happen.

JAKE MERL: Well, John, we'll see how it plays out in the months to come. Thanks so much for joining us.

JAKE MERL: So, John is bullish on Colony Capital. Specifically, he likes buying ticker symbol CLNY at $5 with a stop loss at $3.50. He sees upside potential to $11 over the next year. However, he take profits along the way at $8. That was John Jannarone of IPO Edge and for Real Vision, I'm Jake Merl.