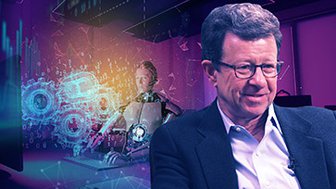 Despite the strong recent employment numbers, is a labor crisis…

Dr. Irene Finel-Honigman of Columbia University talks with Dee Smith of the Strategic Insights Group about the potential consequences of political fracturing in Europe. Finel-Honigman uses a historical lens and identifies the difference between perception and reality as major factors in Europe's political and economic troubles. This clip is excerpted from a video published on Real Vision on June 13, 2019 entitled, "The Combustibility of Brexit."

IRENE FINEL-HONIGMAN: I think one lesson is what happened right after Brexit was announced right after June 23rd, 2016, where the immediate response was the Dow fell 600 points, the pound suddenly looked like it was about to crash. Everything looked like, oh, my God, we tipped disaster again. And after 48 hours, it calmed down.

DEE SMITH: Do you see any evolution in the near-term of this crisis? Whether it's a second referendum or a hard Brexit or whatever, that results in something like that? Any kind of real social violence, even on the level of the yellow jackets in France.

IRENE FINEL-HONIGMAN: Well, I think this is something we have to be extremely careful about. Because what we did see with vestes jeunes- with the yellow jackets in Paris- was that one false move by President Macron of announcing that he was raising gasoline taxes, while at the same time pushing for massive investments and basically tax breaks for foreign money and certainly for the corporate class in France ignited this. Very sadly, once it was ignited, then, as very often happens, deteriorated into a complete, basically, movement of vandalism, of violence which lost its original purpose and cause. Something like this can happen. So, the UK has to be very careful that politicians, in the process of fighting their own little fight about Brexit, do not, in term, ignite a genuine sense of outrage and anger.

DEE SMITH: And it's there to be ignited.

IRENE FINEL-HONIGMAN: It is there. It is there. And it's there in every country. And I think in Germany- and, again, because of German history, in part- but Angela Merkel has also had to be very, very careful of exactly how she's recalibrated and balanced the role of Germany, particularly as, presumably, the largest donor to all European bailouts, et cetera, with the needs of her country, her constituency. And leaders are going to have to really watch out for that. There's no question. And that's why I mentioned that when we talk about the Russian influence, it's very important to understand how deep the sense of disenfranchisement and marginalization and discontent with, basically, regional and global entities is within countries themselves.

It's there. And, yes, I think this is also one reason why the UK will have to be very careful whoever comes in to replace Theresa May. And I think this is not going to be an easy job. And, hopefully, some solution is found. And I'm not sure Boris Johnson's the answer.

DEE SMITH: Yeah, it's very interesting. It's almost like the butterfly effect too- these little sparks can just ignite a conflagration. The whole Arab Spring was literally started by one vendor who set himself on fire because he couldn't get his car back after he'd been taken away from it. And the fire literally spread throughout the whole of the region. And so, you do have this- Macron does one little thing that if he'd done it the week before or if he'd done something different, it might not have produced that at all.

But you can't really judge where those things are. It's not a predictable system. It's like what they call a catastrophic system in mathematics. It suddenly changes from one state to another without any real thing. So, I do have that concern in the UK. And you just wonder if there was, for example, a second referendum. And, of course, the question there is, what would the question be on the second referendum?

DEE SMITH: And I've heard all sorts of versions of that. But if there were- and one side or the other is obviously going to lose- and would that be a spark that would ignite this? And how would you control it? I remember- who was it that said that- this was years ago. And it was a famous book, and he said he described the British as having barely controlled anger. And I think that's true. I think that is correct. And one doesn't want to reach the point in which that's let loose.

IRENE FINEL-HONIGMAN: Well, I think this is the problem in Europe also. You could almost go country by country in Europe. This basically simmering level of anger against some of the political class, against a political decision- this sense that you still are basically be run by elites making decisions that do not necessarily take you into account- is running right now very deep.

DEE SMITH: It's a sense of betrayal, I think.

IRENE FINEL-HONIGMAN: It is a betrayal. And we have to remember, of course, in European history, it's a long tradition of this. The revolution in 1848 started this way. There've been other major revolutions and tremendous changes in Europe that start, often, exactly with that. And so, the point I always find fascinating with a lot of European countries- and, in a way, maybe that does go back to their almost deep and sometimes instinctive sense of their own history- they often do have these sudden movements of rage and anger. And yet somehow at the end, they always seem- particularly since the creation of the European Union- to almost walk to the precipice and then walk back. To somehow understand, perhaps in a deeper level than we do in the States where we have not gone through what Europe has gone through- that you don't want to get too close to the abyss.

DEE SMITH: You can look over.

IRENE FINEL-HONIGMAN: Exactly. And then, okay. And we have seen this already in Italy. We have, in many ways, seen this in Greece. We have seen this in a number of countries. Certainly Macron, interestingly enough, has tried to a little bit contain this by doing something typically French, which, years ago, Mitterrand did- is appeal to the sense of the country, appeal to the sense of patriotism. That we're all in this together.

DEE SMITH: Well, that's that center that seems to be missing, or under so much stress and so thin in so much of the world nowadays. Everything is centrifugal forces- it's forced everything to the side. And in one little crisis, and it's even forced more to the side. And it's really problematic.

Going back to markets for a moment. So, in the various evolutions that, from this point, seem probable or likely- a hard Brexit we hope won't happen. Some kind of a negotiated Brexit fading away of it- it's just on hold indefinitely- another referendum. You see a temporary roiling in the markets in both Europe and the UK- and probably globally. But do you feel like people have already almost priced that in in a way? And so, you don't see that this is going to be the thing that precipitates a serious global downturn.

There may be one for other reasons, but I'm saying do you think that there is a risk- or how high a risk is there that this is something that would precipitate a real serious issue- long-term downturn of some kind? Or do you think that it's already sort of in there in people's minds, so whatever happens, there'll be this period where everybody has to raise their hands up and scream about it. And then things will go back to normal?

IRENE FINEL-HONIGMAN: Well, I think one lesson is what happened right after Brexit was announced- right after June 23, 2016- where the immediate response was the Dow fell 600 points. The pound suddenly looked like it was about to crash. Everything looked like, oh, my god, we've hit disaster again. And after 48 hours, it calmed down. It began to calm down, and everyone sort of stood back and said, wait a minute. The fundamentals in our economies are solid. Nothing else has dramatically changed.

We are looking at one set of, now, major political changes and possible huge problems. But, fundamentally, from an economic standpoint, there hasn't been that much involved in this so far. That's why I found it fascinating to what a point these little safety nets are being laid out in the regulatory side and are basically being set out so that nothing is going to have to take place in absolute immediacy- neither the banks moving nor getting- the whole concept of bank passporting privileges across Europe, a bank being allowed to function each other's countries.

IRENE FINEL-HONIGMAN: And the example I use is during the absolute worst of the sovereign debt crisis when everyone was thinking about, oh, this is over. Well, it turned out that the dollar/euro parity never went ballistic. It remained, yes, a little bit, up a little bit down- it remained fairly solid. Basically, central bank reserves of 65% dollar and, roughly, 20% to 27% euro didn't shift.

There are so many more larger global factors that we have already seen do not necessarily get impacted by political decision and political crises. I think that this may be part of it. The problem is that, psychologically, the perception of a sudden no deal or everything just fall- may be actually more severe. That may be more damaging. The sense of, oh, wait a minute, what now? Not necessarily market responses.