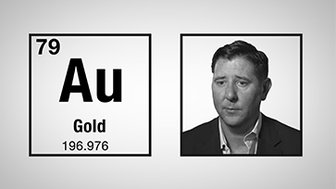 Early or Wrong on Gold?

Luke Gromen, author of Forest for the Trees, and Brent Johnson, CEO of Santiago Capital, discuss the importance of gold during the late stages of sovereign debt bubbles. Gromen explains why gold can be "useless" for 99% of the long economic cycle, but then critical during the other 1%. This video is excerpted from a piece published on Real Vision on February 11, 2019.

BRENT JOHNSON: You know, one of the things that also goes along with the dollar is gold. I don't know that me and you have ever really talked that much about gold. Maybe we have a little bit here and there, so I thought we could touch on the dollar a little bit more if you want to, but we can talk a little bit more about gold, kind of where you see it's going.

LUKE GROMEN: I'd be happy to. For me, I think about gold differently, I think, than some people do from really two ways. Number one, I think gold is really useless for about 99% of the long economic cycle. And then in the 1% of the economic cycle, the long economic cycle which tends to correlate or coincide with sovereign-debt bubbles globally, it's critical to own. And so the overriding-- I never had much interest in gold before 2008, and I think it's an important asset to own some of because I think we are in the midst of a global sovereign-debt bubble that's begun to unravel.

And then I think there's also another way that we've thought about gold and talked about gold a lot which is it is being leveraged by a couple other countries, and China in particular, as a means of gaining credibility for China to be able to print yuan for oil and other imported commodities. And so I have a lot of people ask me, hey, why do you think China is buying so much gold? Why are they importing so much gold? What's the end game? Do they want to back the yuan with gold?

And I suppose that's possible. It's not how I see them using it. What I think they're doing is what China's doing with gold is not about gold. It's about oil. It's about copper. It's about iron ore in that they basically appear to have reopened sort of a version of the Bretton Woods gold window where basically-- the right way to think about, in my opinion, is China's wanting to use, or at least offer, gold as sort of a treasury bond settlement instrument under the post-Bretton Woods system that the United States has chaired. So those are two different ways that we are thinking about gold at the present moment.

BRENT JOHNSON: And so do you personally own gold, or do you recommend people buy gold, or are you recommending miners or physical? What's kind of your view as far as investment-- and maybe you don't give investment advice, but I'm just curious if--

LUKE GROMEN: Sure. No, I do own it personally. I never owned any before 2008 and have held it the entire time. It's a good-sized position for myself. And I think everyone at this particular moment the long cycle I think should own some because history is replete that sovereign debt always defaults, always. and you're at that moment in time where we have too much. There's a sovereign-debt bubble.

And so sort of the last step in that whole process-- and the IMF has written about this a number of different white papers of the roadmap. The last one is a devaluation of the currency or other sort of really inflating your way out of it. And so we're sort of down to the last possible way out of it. And so I think now perhaps more than ever-- I think you said when we were talking earlier you've been surprised how long things have sort of taken to sort of go down this path post '08, and I have been as well, to be honest. But I think now is a point in time where you don't know the exact timing, but you know that there's sort of three or four steps they can do. And they've tried two or three of those steps, and they haven't worked, which tells you the fat lady's probably warming up just offstage.