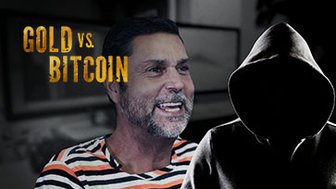 The mysterious financier and Twitter personality known only as "Plan…

What role do digital assets play in a modern global macro portfolio? John Vincent and Sam Jernigan of Wakem Global Opportunity Fund discuss profiting from the bitcoin trade — including portfolio construction, inter-asset correlations, volatility, skew, and the role of covered calls. Vincent and Jernigan also explore more fundamental aspects of digital assets, such as the inherent conflict between the store of value and medium of exchange functions. Filmed on September 9, 2019 in New York.

JOHN VINCENT: What we're looking at is a portfolio that gives us the biggest edge. It's not saying, well, gee, we want to have 10% in fixed income, 15% in FX, this amount in equities, certain amount in commodities and a certain amount in Bitcoin. It's really looking at the global landscape saying where do we see that our primary research is saying that there are edge or where do you think there are opportunities and what is the best way to express that?

SAM JERNIGAN: We're trying to construct a fund that allows us to take advantage of this underlying force of decentralization that's emerging in the macro and the global economy.

MIKE GREEN: Mike Green, I'm sitting down with John Vincent and Sam Jernigan of Wakem Capital. Now, Wakem began out of the private family office. Mike Novogratz, who's well known in the crypto space and the two of you have primarily built a discretionary global macro strategy that takes a somewhat unique focus around cryptos, but not exclusively but that is what you have been working on for the past couple of years, primarily built around some of the thoughts that have come out of the IMF and others in terms of the role that crypto may play in financial assets going forward.

JOHN VINCENT: That's right. I think, on a big picture thematic basis, the idea is that we were reimagining what global macro will look like going forward in a decentralized and digital world. In that framework, we think that Bitcoin and crypto actually has a place in there and you mentioned some of the papers that came out in the IMF, there is now some academic rigor that seems to be backing of a little bit of what we thought from a big picture macro thematic basis.

MIKE GREEN: John, your background is in discretionary global macro. You were at Graham Capital and before that, you were at RBC, Salomon Brothers. You did something interesting. You took a break and you went, took some classes at Princeton particularly focused on this idea of what is blockchain? What is crypto? Can you talk a little about what inspired that?

JOHN VINCENT: Sure. The truth is I was sitting up at Graham and we were in this very low vol FX, low vol fixed income, about 60% of the world's central banks were at negative rates and I was trying to figure out what will gold-- what will store of value look like going forward? Princeton was offering this class in blockchain technology and so I basically signed up for that. It started out-- a friend of mine Joe Lubin was one-- with Vitalik Buterin, was one of the original builders of Ethereum. He had an office down in Bushwick, Brooklyn, [indiscernible]. I was like, look, I want to understand what's going on in this digital space.

As I say, I'm a macro guy, and I'm looking at the world and thinking that we need other stores of value out there. It's very difficult to look at a world where you're paying money to put cash up, which is what we're seeing in Germany, Switzerland, really across the globe. That's what sparked my interest. It's interesting, as Sam came about it from a slightly different angle and that's how things have worked pretty well between us as we came about it differently and recognized the opportunity set, even though we're not coming from the exact same spot.

MIKE GREEN: Well, and you and I met through Sam. Sam and I have known each other for a number of years. You used to be at Argonaut and after that, you were with Graticule for a while in Asia. You've always struck me as somebody who's willing to approach the world from a very nontraditional standpoint to ask the questions and I believe very early on, you're at Bear Stearns. You were one of the guys that identified the mortgage dynamics. That's when we first came into each other's window of knowledge. What brought you into crypto? How did you decide that this was something you wanted to focus on?

SAM JERNIGAN: It came on my radar in 2013. I missed the story in 2013. At that time, the narrative misled me to some degree. The narrative was a continuation of the Fed's printing money, there's going to be hyperinflation, I never believe that. I believed that QE would not be that effective, and that deflation was more a threat at that time than inflation. I viewed it more as a very interesting technology.

I was very busy obviously, building a firm and had a job focused on assets that we can trade and so it was more a fascination than anything else. I was speaking about at the time with mainstream economists who were fascinated by this new technology. It wasn't really until 2015-2016 when I was at Argonaut, and we were betting against the Chinese RMB and particularly contacts in Asia that we would speak to, they would tell me, look, the Chinese billionaires, they still want dollars and an insatiable appetite, but they want Bitcoin more.

I think this chart has been floating around now. Kyle Bass has shown in a few times, but that's what I was looking at every day in 2015-2016, was over the course of call it 18 months, we were playing for a 3% window in dollar-CNH with super large notional dollar sizes, a move that ended up moving being about 10% and Bitcoin went up 470% of that same window, and it was just this insatiable demand to bypass capital controls and get money out of the country, and I remember saying to people, we got the wrong trade on. We got to buy this Bitcoin. Because as a macro trader, when you have all these different tools, you're always saying what's the best tool to deploy for the view? Of course, at that time, though, that wasn't a tool where we were constructing.

MIKE GREEN: This is a challenging, dynamic, because in part, all of us have been brought up in an industry in which bubbles have been the omnipresent feature for the past 20 years, and so anything that goes up 400% or 1,000%, or 2,000% certainly takes on characteristics that cause you to scream tulips.

SAM JERNIGAN: Here's where I would connect the dots to how-- for John and I, which was after leaving Graticule, again, when you're on Wall Street and you have a job, you don't have a lot of time to explore things outside of what's going to make you money and but I had a non- compete, had some free time that I was forced to take. I started looking into this and a friend of mine at the time that's in Durham, who was a former head of monetary affairs at the Fed, was then a special advisor to Christine Lagarde, he's now an official advisor at Wakem.

He had done an analysis that effectively showed that Bitcoin, contrary to the presumption, he went in with had bumped out on the efficient frontier as it was not a reach for yield, it was not a speculative bubble, so to speak, in an isolated sense, that there was something more going on here and that in fact, it was uncorrelated to both safe and risky assets.

MIKE GREEN: Let's push on that for a second because part of my understanding of how that type of analysis emerges is that we look at a trading history and we say this is telling us that price action says this is uncorrelated in some manner. That this is the magnitude of the moves, offer diversification benefits that wouldn't require you to put on additional leverage, for example. You could have done 50 times as much CNH and you would have completely blown up in the spring of 2016 or 2017 to be more precise, I'm sorry, and tried to replicate Bitcoin's returns, but that that was really not something that was available. That's effectively what Benson's work would've suggest that it's a separate asset that occasionally overlaps in terms of correlation, but has its own dynamics and therefore has a role within the efficient portfolio.

SAM JERNIGAN: Basically, at every level of vol across the entire distribution, so whether it's 1% or if you're targeting a 15%, at every level, it increases the efficient frontier of a portfolio.

SAM JERNIGAN: I think, and the paper will be coming out shortly, but I think a couple of the other notable items is one, it shows that there is a benefit to active management over passive. The other is that even for very conservative traditional portfolios should have a little bit.

MIKE GREEN: Well, I think that's a really interesting dynamic because if that is true, unless it facilitates the addition of leverage to the portfolio, i.e. is risk reducing, it has to replace something. Something has to shrink in its allocation in that efficient portfolio unless the volatility dampening is such that you can add leverage to the portfolio. What's the asset it's replacing?

SAM JERNIGAN: My answer to this is a little bit broader. I'll let the-- I don't want to fully-- I'd prefer to tease out rather than fully break it out. The short version is as macro managers will trade coffee or cocoa or wheat. I guess my question is--

SAM JERNIGAN: I guess the question is that if you have macro managers who are otherwise replacing some aspect of some other asset, either safe or risky, with trading wheat, why aren't they trading Bitcoin? I would argue that there's a