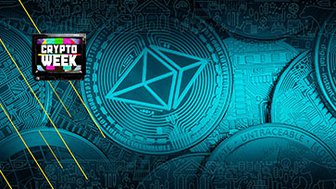 Since the very start of Real Vision, we have been…

AK highlights some of the recent learnings from Real Vision's crypto coverage. What are the biggest opportunities and risks when it comes to digital assets — and what will our future financial system look like?

AK: So last week we looked at the story of Crypto, since Real Vision started covering it in 2014. This week we're going to hear from some trailblazers to survey the new landscape of the crypto industry. We follow the breadcrumbs left by Barry Silbert and Barak Ben-Ezer, to the buffet of must-see content from Real Vision's Crypto Week.

So let's get to it in this week's episode of Real Vision's The One Thing.

What's going on, investors? AK here. Now, I know you enjoyed the first half of Real Vision's crypto coverage. But that was just the beginning.

In our first crypto episode of The One Thing, we concluded that cryptocurrencies have value, but the market can't exactly agree on how much. For part two, we're going to look at what is currently bringing value to the crypto space, and what the future might look like. We had guests like Barry Silbert, who runs a crypto investment fund, and Barak Ben-Ezer, who's creating the first sovereign cryptocurrency in the Marshall Islands.

The crypto industry has grown exponentially. And just one example of that is the Grayscale Bitcoin Trust. A subsidiary of Silbert's Digital Currency Group, last week he joined us again to discuss how far crypto tech has come. He breaks down the digital world, Decentraland

BARRY SILBERT: OK. With a few key differences. Number one, the land in Decentraland is ownable. So every parcel of land you can buy. And you can speculate on a land. You can build on lands, you can lease out the land, number one.

RAOUL PAL: But is it not infinite?

BARRY SILBERT: So it's not. The supply is capped.

BARRY SILBERT: And that's the other big difference from Second Life. Second Life was infinite. If you ever logged in a few times, it was overwhelming. There was no urban planning. And so Decentraland, it's a grid the size of basically, Washington DC.

So you can own the land. And then there is an in-world currency, called Mana, M-A-N-A, that is tradeable like any other digital currency. We have invested in Mana.

So the opportunity for land owners to monetize their land is really interesting. There's an advertising play there. You can have a whole advertising network within Decentraland.

AK: The picture that Silbert paints here certainly sounds a lot more like the Matrix than World of Warcraft to me. We don't know what other crypto-fueled digital universes will look like in the future. But technologies like Decentraland are showing us what the potential can be. Whether it's converting the US dollar to mana, to buying your own piece of Decentraland, gambling in virtual Vegas, or running your own digital business, the future of the cryptoverse is being built right now.

Now, the crypto revolution hasn't just influence these virtual worlds. But they've influenced the real world as well. Barak Ben-Ezer is the lead of the group that created the SOV, which is the world's first sovereign cryptocurrency based in the Marshall Islands.

Ben-Ezer joined Real Vision to talk about creating the SOV, touching on issues of acceptance, privacy, and how it solves micro-level problems for the Marshall Islands. And how it can grow into a massive macro-level opportunity for the concept of a sovereign cryptocurrency. Here he is, addressing that micro-level problem.

BARAK BEN-EZER: The Marshall Islands have 1,153 islands. And only four of them, major ones, have bank branches. The other ones are mostly-cash economies.

AK: So the SOV turns the complexity of having those transactions-settling cash boats, servicing over 1,000 islands into something that can be solved with a push of one button. This solves a real problem for Marshall Islanders. But with the SOV, the macro-level opportunity is where the real value lies.

Here's Ben-Ezer, explaining how the SOV straddles both the crypto and Fiat currency worlds, giving it the flexibility to potentially gain widespread acceptance.

BARAK BEN-EZER: So it's important to emphasize that we believe that the rollout of the SOV into the global financial system is going to be a gradual process. We don't really you think it's going to be an overnight, that everybody in the world would accept SOV.

GABY HEFFESSE: So have a dual currency?

BARAK BEN-EZER: That being said, though, that being said, SOV has the benefits, of like, think about a bridge between these crypto islands and the mainlands. And it has one leg here and one leg here. So on the one hand, you'll be able to hold and transact SOV. Like any other cryptocurrency, hold it in a crypto wallet, send it over the crypto rails, trade it on cryptocurrency exchanges. It will have all that.

On the other hand, it's a Fiat currency that legally, at least-- and also now, it has compliance-- can be held in a bank. So you'll be able-- if you're not savvy with crypto and all that stuff, you can just hold your SOV in a bank account in the Marshall Islands. And hopefully afterwards, also in other places.

And then you can have a credit card connected to your SOV account. And then just pay with your SOV in any business they accept a Visa or MasterCard. Just in the same way if you come, today, with your US card and you go to, let's say, Europe, you can just pay with your credit card over there. So in that sense, SOV will be the first crypto that has all the wonderful benefits of crypto but could also become a global trading currency. Because it has all the network effect that Fiat currency has.

AK: So the SOV sounds great and all, but the Marshall Islands are a small set of islands in the Pacific Ocean. How widespread is the SOV's adoption going to be? Who knows. What I can say, is that the SOV needs a lot of infrastructure development, and practical acceptance before it becomes accepted outside of the Marshall Islands.

Decentraland is here right now, though. Real people are buying into that crypto universe. On top of the crypto investment funds, and crypto exchanges that you've probably heard about, people are starting digital businesses, buying digital land, and creating valuable technologies today.

In the long game of technology adoption, we are still in the early stages of crypto. But the future is being built right now. And if you want to stay ahead of the curve and see how you can profit from this, then stick with us at Real Vision. I'll see you next week.