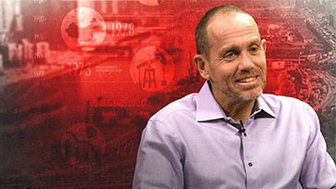 Alan Shaw, CMT, former president of the CMT Association, tells Ralph Acampora, CMT, senior managing director at Altaira Ltd., the story of how he began using technical analysis - despite resistance from his peers - to help his firm navigate the top of the 1960's stock market successfully and start a powerful trend on Wall Street. This video is excerpted from a piece published on Real Vision on April 12, 2019 entitled "The Godfathers of Technical Analysis."

ALAN SHAW: I flunked out of college in my freshman year. And I have since been given an honorary doctorate law degree from that same university for my Wall Street accomplishments, you might like to know.

I have a very personal gratitude, that is the fact that I had the pleasure and the ability to experience one of the greatest bull markets in the history of the United States and lived through it and have been a participant in it, a once-in-a-lifetime type thing, coming in the business in the late '50s and then going all through the '60s. And finally the market broke through 1,000 and then 10,000 and now 20,000. It's fascinating when you think back. You obviously got to look at the long-term picture on a large scale, keep it in perspective.

RALPH ACAMPORA: Yeah, a lot has happened. What we do, as you just mentioned, we follow the markets. But I know you've had in your early days had a beginning in fundamental analysis. Tell us a little bit about that because you have an interesting story about when you were right.

ALAN SHAW: Well, I flunked out of college in my freshman year. And I have since been given an honorary doctorate law degree from that same university for my Wall Street accomplishments, you might like to know.

RALPH ACAMPORA: How much do you have to pay for that? That's another discussion. I'm only kidding.

ALAN SHAW: But the point was that I really didn't have any background in finance except accounting, my one year. I passed that. And I discovered that Harris Upham- I was doing a lot of work for Ralph Rotnem statistically, overbought, oversold, indicators, or just doing research for him. In fact, my first computer was a slide rule. And I use it to do relative strength analysis, calculating ratios with the slide rule, dividend yields, PE multiples, all that stuff.

And they had specialists in the research department. And I was in my early 20s at the time and again, without any formal education. But I went to Ralph, and I said, you don't have anybody specializing in the consumer non-durables, like foods, beverages, soft drinks, whatever. And he said, well, would you like to take a crack at it? I said yes, because I think that there's a tremendous growth opportunity, that these are not really widow and orphan defensive stocks because of the growth of things like frozen foods, convenience foods. The profit margins on these products were incredible.

RALPH ACAMPORA: What is this, the early '60s, you said?

ALAN SHAW: Yeah. And so, that was my thesis. It was called "Investment Opportunities in the Food Industry." Little did I know, Ralph, that I was publishing a report in the early stages of one of the greatest consumer non-durable sector runs. It came to life all of a sudden to keep that market trend alive. Anyhow, Ralph Rotnem used to commute with a fellow named Jim Morgan.

RALPH ACAMPORA: Oh, sure. Of Morgan, Rogers, and Roberts, yes.

ALAN SHAW: Yes, Jim Morgan was a principal partner at Morgan, Rogers, and Roberts. And they were located at 140 Broadway, one building north of us, we were on 120. And Ralph called me in his office one day, and he gave me this book that Jim Morgan had given him written by a gentleman by the name of Alexander Wheelan. And it was called, Study Helps in Point and Figure Charting Technique.

ALAN SHAW: And I looked at Ralph. I said, you want me to read about this tic-tac-toe stuff, the Xs and the 0s and all? He said, well, just take it home and read it and see what you think of it. Well, I found it to be absolutely fascinating, not believing anything, of course, because I was now looking at earnings and managements and balance sheets and income statements and so forth. I was looking at companies, not really stocks.

But unbeknownst to Ralph, I took a walk over to 140 Broadway one day. And I said to Jim Morgan, I said, I'm fascinated by what I have superficially learned so far from this book by your colleague Mr. Wheelan. Is it possible you could give me some sample charts from your library? And I can try to keep them up to date by hand going forward. And if you're going to charge me, charge me. I'm not a rich guy, but I'll be happy to pay for some of it. So he was very happy to do so. So I walked back with a chart of General Foods, National Dairy Products, Swift, Armor, all these foods.

ALAN SHAW: Yeah. And I used to keep them up to date by hand every day. And when somebody walked by in the research department, I'd shove them in the desk drawer because people thought that you were a sorcerer or-

ALAN SHAW: -witchcraft, yeah. So anyway, 1961, I started to see patterns develop on these charts that made me feel very uncomfortable. So, I went to the book, to Mr. Wheelan's book. And on page 25, they had example of point and figure price patterns. And the ones I was finding happened to be in a column called Market Tops.

ALAN SHAW: Yeah. They were all rolling over, like the difference between the frown and the smile. And I showed these to Mr. Rotnem. And I said, Ralph, I said, all my fundamentals are on target. The earnings are coming through. The growth projections we forecast are happening. I know the stocks have doubled and tripled, which they did. I was a big hero in the research department, the food analyst. That's a joke in itself.

So he said, well, Alan, he said, what do you think you want to do about? And I said, well, I don't know. I'm betwixt and between. He said, well, you might be about to learn something. So anytime he said something like that, I would sit down and listen intently. And I said, Ralph, what is it now? He said, you're going to learn maybe how to separate a company from its stock.

RALPH ACAMPORA: There you go.

ALAN SHAW: And I had to sit there and reflect on this. What is he talking about? I said, you mean the stock might go in a different direction than the company? He said, yes, he said, because the market is a discounting function. Market is a discounting function. It looks to the future not to the past ever and sell them to the side. So the reason these stocks are all up is because the things that you thought might happen have happened.

RALPH ACAMPORA: Yeah, can't get better, can only get worse.

ALAN SHAW: And that's the whole trick right there, you see? In price there is knowledge. Market's a discounting function. So I sent out, in those days, the typical brokerage lines, not sell. But we would have no objection if clients wished to book profits and lighten up positions. And Ralph, the 1962 bear market came out of nowhere. My stocks crashed 30%, 40%, 50% in that bear market.

RALPH ACAMPORA: Wow. So, the timing aspect, which is what technical's all about. Just you nailed it.

ALAN SHAW: And I looked back, and I- see, I wasn't smart enough to know that 49 times earnings was expensive for General Foods. And that was the multiple at the top that it topped out in. So, from that point on, that would be like '62, '63, '64, is actually when I started teaching a course at the Institute of Finance because a lot of our trainees were coming back from the Institute and telling me things they were supposedly learning, which I didn't think had any real relevance.

RALPH ACAMPORA: Then when I joined you, you gave me the basic class to teach. And I've been teaching it for the last 49 years.

RALPH ACAMPORA: And with you, we taught the Street.