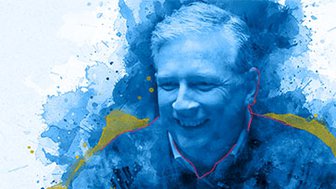 Tesla might be the most polarizing topic in financial markets.…

David Blumberg, founder and managing partner of Blumberg Capital, joins Tyler Neville to discuss how a confluence of various 'technological accelerators' and the current economic backdrop of low yields is causing investors to seek out real assets that grow. He discusses how the advent of cloud computing has enabled startups to acquire Fortune 100 customers — something that was nearly impossible ten to twenty years ago. This video is excerpted from a piece published on Real Vision on May 9, 2019 entitled "Public vs. Private Capital: Taking Advantage of Misaligned Incentives."

DAVID BLUMBERG: Super big picture, from Ronald Reagan in the 1980s until to the 2012 period, something like that- declining interest rates. That was almost a guarantee. So, folks that were heavily debt oriented- private equity firms, real estate firms, people who were investing, saying, assuming that the next year, they could borrow for cheaper, which went great. There was this incredible rising tide, or you might call that the tide was going out on interest rates, things are going down. And then quantitative easing ramp that up on steroids. So, lots of money, it was super easy to get money. And so, things were very capital intensive, and faced a lot of debt, had a pretty easy road for three decades.

Now, it's different. That quantitative easing, at least in the United States, has been stymied and probably reversing, Europe and Japan are sticking with it. I don't know why. I think they're mistaken. But I'm not a central banker. What we're doing in Silicon Valley is real growth- growth by real product sales, new innovation. That's disrupting some markets, you get the cheapest money in the world, and they're still going to decline.

We're trying to build businesses for the future. And these businesses are much less capital intensive, they're much more dematerialized. They're much more software based. They're based on data sources that were never available even five years ago, using AI that was never available five, 10 years ago, on hardware that was never available. Or if it was started, Nvidia started gaming and things like that. And now it's found a wonderful home and powering algorithms for AI and even crypto.

So, we have this confluence of these wonderful technological spurs, or accelerators, plus an environment in the macroeconomics that says, yeah, debt's probably not going to get a lot cheaper, it might go up. Yield is low, I better find some real assets that are going to grow. So, that's why I'm so bullish on this economy. And we're seeing companies, very young startup companies get customers that are Fortune 100 right out of the box. That was not really possible 10, 20 years ago.

Now, the scale of the cloud, as a base gives you a foundation. The credibility of the VCs behind you is a thumb of assurance on the scale. And the innovation that they're able to show and demonstrate 10 x performance better or safer or faster, says to the big customers, hey, I should try this. And if you're not selling to big customers, you can now sell to SMBs on a distributed basis at low cost of customer acquisition for relatively good LTV- long term value of that customer. So, the acceleration of disruption, I would say is happening.

And a funny statistic, I think, in 1955, 'til today, only about 10% of the same Fortune 500 companies are extent, there's been a big turnover. Some of them have consolidated, but some have completely been wiped out. And new ones are being created. And if you notice, many of them are data companies. They're building new data barriers, the Googles, the Facebooks, etc. They're building new franchises. And that's the kind of thing that we think is so exciting.

In FinTech, we're seeing unbundling and then re-bundling of services, adding financial services to marketplaces. A lot of things can be done so much more efficiently by these new folks. And they can partner with large companies, we love that. We would like large companies in our LP base, we'd like to work with them and partner with them because it's not a zero-sum game. Some startups will become the next Fortune 100 themselves, but many will partner with or be sold to the existing large companies today.

TYLER NEVILLE: Let's talk about how capital is moving into more risky parts of the market recently. SoftBank, can you talk about how much division fund affects the venture capital ecosystem? I know you're on the earlier stages, and they're on the latter stages. But how does that affect the whole ecosystem?

And part of that is driven by the fact that until recently, the IPO market was put into a trauma by Sarbanes Oxley, some other regulatory issues and some changes in Wall Street, decimalized trading a number of things, the ending of really buy side research that was able to be traded for soft currency. That has caused the IPO market which used to start much earlier to retreat back.

So, a lot of companies stay private a lot longer. There are also a lot of tort lawsuits against young companies. So, they would stumble in the first couple quarters, they get sued. A lot of people didn't want that. So, a lot of companies stayed away from the IPO market. Now, what that did is it allowed- and it required the investor class that wanted access to those high growth companies to jump in while they were private. So, a number of big institutions that used to only participate and T. Rowe Price is one that I used to work for, we only used to participate in public companies. Now, they come into the later stage.

So, SoftBank is a hybrid of that. They're coming in with very large checks in late stage companies, pre-public, because they want part of that growth. And I think it's an interesting phenomena. It has caused inflation at the higher end of the market. Doesn't affect us so much. Again, we're scuba divers. We're worried about long-term currents that are consistent like the what's that- the Gulf Stream is always going to the northeast on a regular basis. You want to watch out for big coral reefs, and not to hit those, make sure you have enough oxygen. Our risk factors are very different from those people who are surfing and looking for waves and wind.

So, it's a little bit more like investment banking versus transaction oriented, long-term growth oriented. And we're starting with perhaps a riskier place, it may be riskier to scuba dive than surf. But the risk factors are very different. So, I think it's nice that they're coming into the market, they don't disrupt us so much. They cause inflation at the series C, D, E. That's okay. Sometimes they'll be up, sometimes they'll be down. Ours is more steady. I think the market needs both. So, it's good that everyone's around the table, but doesn't hurt the small stage.

I would say the one thing that is happening in this early stage, I didn't mention, but it's important to note is a lot of new small funds and angel groups. The angel market has really developed into a force in the last 20 years. Very successful entrepreneurs have sold their company, and they can add value and they know people and they can open doors. And they can put in a limited amount of money. We work very well with them. We like the angel market, we like the smaller VCs. And as a bigger VC, we can work with them to help lead around, they might find it first. But we are able to put together the right syndicated amount of money that they need, as an example. So, maybe SoftBank is doing that in the pre-public markets where companies need another 100, 200 million before they go public.

TYLER NEVILLE: I guess the average retail investor releases money where they're normally buying your mutual fund or your ETF. And now, that you saw Lyft go public and sold off a little bit, a variety of others. Do you think that they're going to want to get in on the earlier stages now? Is this going to end in like a euphoria on the venture side of things? Or will that capital just stay there and churn out yield? How do you see that playing out over the next couple years?

DAVID BLUMBERG: Great. I'd probably would not want to forecast day trading psychology, that's not an area that I think I know much about, here's what I would say. Water finds its own level, investors want to have options all across the stack. When the regulatory environment or some other external change has a big impact as Sarbanes Oxley did to cause VCs and entrepreneurs to hold back from IPOs and other trends that I mentioned before. That caused again, a gap in the capital structure, which has been filled by the large late stage investors that come in with mezzanine or late stage pre-IPO funding.

Now, you're talking about down at the earlier market. The change that has happened where individuals complained venture capital is because of they've seen things like crowdfunding opportunities, they've seen the rise of the angel community, now, it's concentrated in certain cities, typically like the Bay Area, New York, Chicago, et cetera, LA, but it's happening. So, people have more exposure. It's still very hard to play VC as an individual. And I don't see that happening much except through groups like an angel list or R crowd. And there are people who can get certain amount of exposure.

But remember, venture is still risky. And it shouldn't be a big part of one's portfolio. And so, if you only have a small portfolio, then venture is a tiny section, you're not going to have impact on the company, you're not going to probably have a diversified portfolio. So, it's hard to play it as a day trader in unlimited means. It's more of an institutional game or for very wealthy family offices and groups like that. And it's also long-term and doesn't have a lot of liquidity.

So, those are risk issues that the individuals has to contend with if they're considering venture, very exciting. And a lot of people find that they enjoy being in angel clubs, where they see the deal flow, they can talk about things, they can learn about stuff. It may not be a key part of their portfolio in terms of return. But it can provide some intellectual stimulation and exposure, maybe in front or even into their public investments as well.