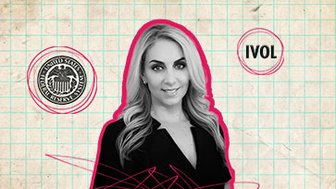 Tom Thornton, founder of Hedge Fund Telemetry, discusses his bearish view on the 10-year Treasury note, reveals where he thinks yields are headed next, and reviews the technical setup he outlined in a Think Tank note on June 27. He applies Demark Indicators on bond futures, yields and ETFs to pinpoint the end of the aggressive rally, and considers playing the thesis with an options trade, in this interview with Justine Underhill. Filmed on June 26, 2019.

JUSTINE UNDERHILL: Welcome to Real Vision's Trade Ideas. Today we're sitting down with Tom Thornton of Hedge Fund Telemetry. Great to have you back.

TOM THORNTON: Nice to see you. Thanks for having me.

JUSTINE UNDERHILL: So today, let's talk about bonds. We've seen quite the rally in the bond market, specifically the 10-year treasury. What do you see going on there? And can this rally continue, or is it overdone?

TOM THORNTON: OK. Well, let me back up a little. In last October, when the yield was around 3.20, we had very, very low bullish sentiment. And we had an upside Demark Sequential countdown, which told us that the trend of higher yields was coming to an end. And we've had a bullish bias all the way down.

We pressed the bullish bias when we broke the March lows, which was around 2.36. And we targeted 2, 2.10, which we surpassed. And so right now we have a very, very high bullish sentiment reading around 87. We've been in the 90s a little bit.

But let me explain. Sentiment is a condition. And something can stay very bullish or very bearish for a period of time. What you need is a trigger.

So we use Demark indicators, which are trend exhaustion indicators we've talked about before. And what's important now is that we're seeing a lot of the same signals we had at the highs now at the lows. And not only on daily, but on weekly as well. So that gives me more conviction that we're going to see a trend change in yields. We're going to see yields perhaps retrace about half of what they've gone down.

JUSTINE UNDERHILL: Interesting. So a little bit more of a bearish perspective now. But if you look at bonds over the past 30 years, betting against bonds hasn't been such a winning trade. So do you see this more as a short-term reversal or something that might be the end of the bond rally?

TOM THORNTON: Well, I don't like to call the end of the bond rally because we obviously could go further. And we could stop out of this trade. But I think that we could retrace half of what we've done. Now, I could go out a little further and say, yeah, sure, we could see 4% on a much longer term basis on the 10 year. But let's not get ahead of ourselves here. I think the economy is not necessarily great. But I think bond yields are going to back up.

JUSTINE UNDERHILL: And so then in terms of the Demark indicators that you're looking at, at what point do you have confirmation that there will be a reversal?

TOM THORNTON: Well, we're starting to see confirmations happening right now. We have several ETFs that are showing. Very well-known ETFSs, like IEF and TLT, showing exhaustion signals. We have the 10-year treasuries, as well the 10-year yield all doing it together. And like I said, we have the weekly on the 10 year holding the 2%, which is exactly where it was in 2017 right before they took off.

JUSTINE UNDERHILL: So how would you recommend going about trading this?

TOM THORNTON: Well, obviously you could short treasuries here with futures, or you could short the TLT IEF. Again, I like a little longer term duration. I don't necessarily want to say let's get shorting-- start shorting the two year or five year. But I think a little further out on the curve, you have a better bet.

You can also buy put spreads on those ETFs. I would like to say go out to August. You get the Fed meeting on July 31st. Buy a put spread using a 35 delta and 10 delta, so you buy the 35, and you sell the 10.

JUSTINE UNDERHILL: OK. And then in terms of TLT or other ETFs, are there specific levels that you're looking at there?

TOM THORNTON: Well, I think on the TLT, I think you're going to probably see a little bit of support around 125. And it's around 132 now. So you have some downside potential there. And I'm not saying this is the end of the bull market for bonds. But I think that's a reasonable bet.

JUSTINE UNDERHILL: What do you see as the biggest potential risk to this trade?

TOM THORNTON: The biggest risk is that the Fed cuts 50 basis points in July. Earnings are terrible. Economic reports come out even worse. And I think that's all very possible.

However, what if they're not as bad? What if the China tariffs, there's a thaw this weekend at the G20? What if the Fed starts to say, look, we're kind of hedging a little bit here. There'll be speakers talking all through July, and that could happen.

TOM THORNTON: Well, I'm not necessarily very bullish on equities, but I will say as at this level. But I will say that there is potential. You could see another move higher, if, like again, if earnings aren't as bad. There's that hope there. I can definitely make that case.

But one of the things that I've been looking at is a ratio of the 10-year yield versus the S&P 500. And on a weekly basis, we also have on that ratio a 13, countdown 13 Demark, and then set up 9, which is what we saw at the peak. And this is taking a huge move versus the S&P over the last year. And so I think there's mean reversion there as well. So that just gives me more confidence that this trade will work.

JUSTINE UNDERHILL: Interesting. So you see equities, or specifically the S&P 500 potentially outperforming?

JUSTINE UNDERHILL: So then could a another potential trade be going long equities and short bonds? Or is that little bit too risky to dip your toes into?

TOM THORNTON: I have no problem with that just because of that ratio. I think the pair trade will work. Again, if it stops out, so be it. You move on.

JUSTINE UNDERHILL: Mm-hmm. Can you break down your thesis on bonds in 30 seconds?

So when I see that confluence of indicators, combined with the sentiment condition, and you've got the trigger with the Demark indicators, I think you have a trade to short bonds.

JUSTINE UNDERHILL: Great. Tom, thank you so much for joining us.

JUSTINE UNDERHILL: So Tom is bearish on bonds. Specifically, he's interested in put spreads and recommends buying the August 35 delta and selling the August 10 delta on both of the treasury ETFs, TLT an IEF. Just remember, this is a trade idea and not investment advice. You should do your own research, consider your risk tolerance, and invest accordingly. For Real Vision, I'm Justine Underhill.