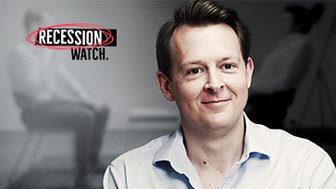 Shannon McConaghy of Horseman Capital paints a dour picture of…

Prepare for a Japanese Banking Meltdown?

Investment visionary Kiril Sokoloff, chairman and founder of 13D Global Strategy & Research, draws on his deep knowledge of history and on the interplay between different market forces in order to forecast what's ahead — and to suggest how savvy investors ought to position themselves today. In this deep-diving conversation with Real Vision co-founder Raoul Pal, Sokoloff helps answer the most pressing questions around markets and the economy. He also provides a read on how other significant minds are making sense of the increasingly powerful forces that are shaking our financial world. Filmed on July 10, 2019 in upstate New York. To learn more about 13D Publications, visit http://www.13D.com/trial Note: When this interview was filmed, gold was trading at about $1,400 per troy ounce.

KIRIL SOKOLOFF: But the excesses are so great that we get desensitized. And what would had been a single at the last cycle peak, this cycle peak, we're just okay, so it's another crazy excess. And I worry about people who bought bonds that didn't know what they bought, or that people who bought index funds who didn't know what they bought. And the heroes in the boom become the villains in the bust.

RAOUL PAL: When I got a big question in my mind, there's one person I really want to speak to. So, when I started developing this idea about thinking there's a recession coming, I always thought, I wonder what Kiril Sokoloff thinks. Kiril's a bit of a mentor for me, he really is a legend within our industry. And I don't use that word lightly. He knows everybody there is to know. And he's incredibly well-respected. And I've taken the long trip out from New York, up to the Adirondacks to Kiril's house on the lake here to come and sit down, spend some proper time with him to pick his incredible mind.

Kiril, 18 months since we actually got together on camera, and started to talk about things. And I've been thinking of something that I'm seeing in the data and the research that I'm looking at that I really want to pick your brains on, because I really respect how you think about things. And so, my hypothesis is that we're looking potentially likely to be going into recession, I think the global situation is more concerning than most people think it is. Even today, we've had Jerome Powell indicating that they're going to cut rates, but nobody really believes that maybe the cycle's ended. And I already think it is. But I wanted to know, what are you thinking?

KIRIL SOKOLOFF: Well, the great question of our time is whether this is a mid-cycle correction, like '95 or '98, with the Fed easing into a recovery, or whether it's recession, like 1989, 2001, or 2007. And I have a very hard time seeing that this is '95, and I can go into why I don't think it is. I'm totally agnostic, I'll let the market decide for me. But all the evidence on economic data and above all, confidence and trust. Because this is really a confidence and trust issue. How are you going to put confidence and trust back into the picture? You've done a savage cutting on that. I cannot believe it's possible for trust to be restored in the next year and a half. Just impossible.

RAOUL PAL: So, how do you rebuild trust?

RAOUL PAL: So, your sense is we're maybe in a cynical turning point, but we're actually, this is a secular turning point as well in many respects?

And then, of course, you have what I call the burden of the debt, which might be the reason why it's so hard to get growth. And the last time we tried to do economic growth with more debt, solving the problem of debt with more debt, was in the 1920s. And we know how that ended up. So, we got 250 trillion and counting of global debt, which is more than three times global GDP, we've added debt at the rate of depending on the country one and a half or two times more than nominal GDP in the last 10 years. So, we've leveraged up the system. And maybe the burden of debt is too great to grow. And even though interest rates are low, a lot of the debt was used for nonproductive purposes. So, it's not generating any cash flow.

And then of course, you have demographics, which into recently, the US was a hopeful spot, and now, it's almost as bad as others with the population growing at the lowest rate in 8 years this last year. So, if in fact, it is beginning of a recession that has immense implications, which is why I'm glad you asked me the question. And the first is, will the recession be over by the election? And the second is how will this impact China-US trade relations? It is very, very significant.