A 5-part special series on The Kiril Sokoloff Interviews, with the legendary Founder and CEO of ARK Investment Management LLC. 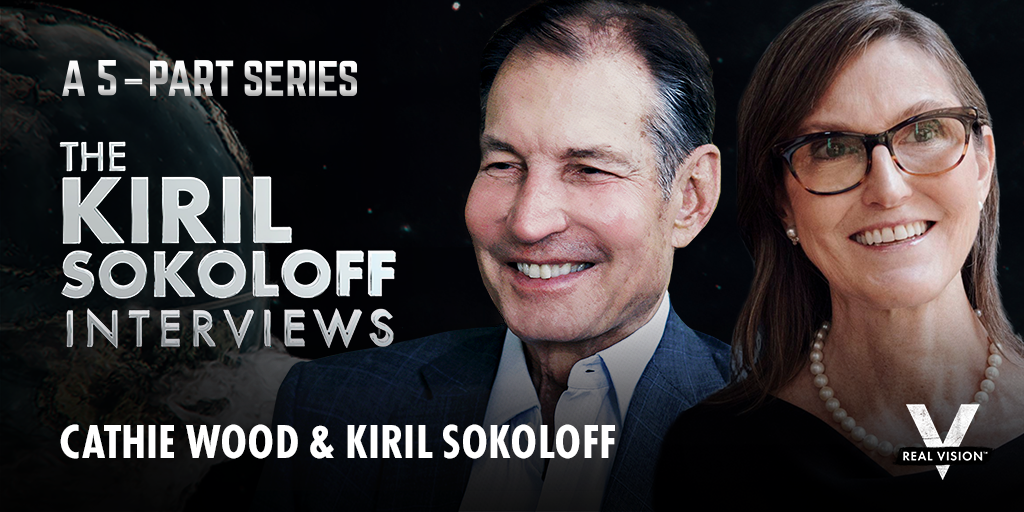 A Meeting of Intellectual Titans, on Real Vision

Between them, they have nailed most of the large secular changes of the last few decades.

The collective firepower of watching them in conversation together is something to behold.

Now, you don’t have to imagine what it would be like…

The interview was filled with so many riveting insights that we simply had to turn it into a 5-part limited series on The Kiril Sokoloff Interviews show.

One of the things that makes this so epic is that Kiril and Cathie are friends, and so the conversation is much more in-depth than you could expect to find anywhere else.

“The one manager on earth who truly understands what’s going on is Cathie Wood. She has nailed the big themes. I think she is a genius.” 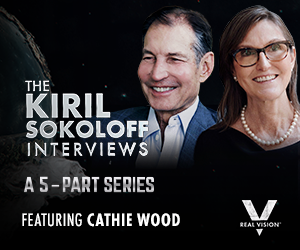 In the first part of this extraordinary 5-part conversation, Kiril and Cathie discuss how Cathie’s background as “a classic military brat” shaped her, why Cathie believes half the S&P 500 is threatened by disruption, why Kiril thinks Cathie is “the world’s greatest innovation investor in the public markets,” and more. 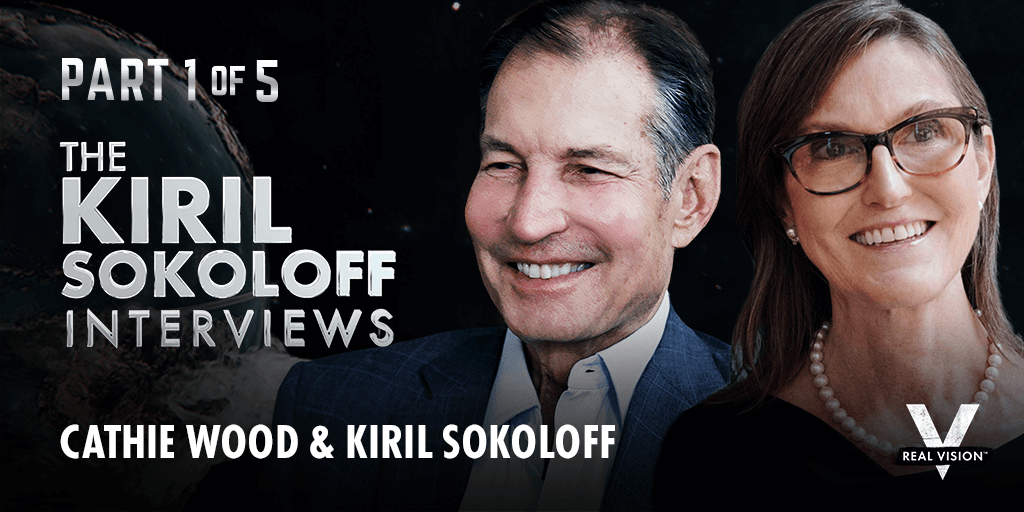 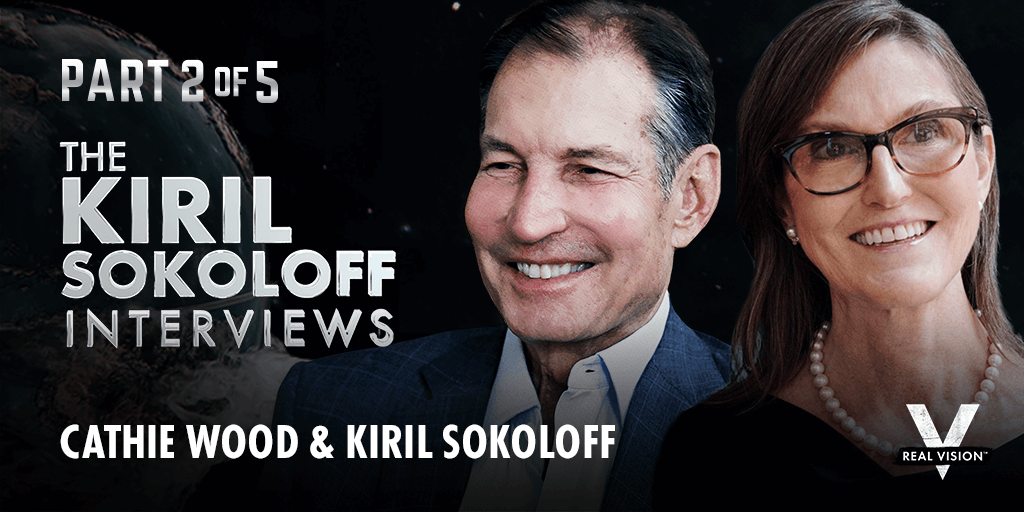 This is an eye-opening deep dive into Cathie’s investment process, from idea generation to trade execution, as well as an exploration into where ARK’s Tesla thesis began, how it developed, and how they gained a competitive edge because of an “a-ha” moment around battery technology.

In this chapter, you’ll learn about the 5 major platforms Cathie says are driving the innovation revolution, why technologies can take up to 25 years to be ready “for prime time,” where Cathie thinks the next FAANGs are, how there is an accelerating shift into yielding instruments in the DeFi world, and more. 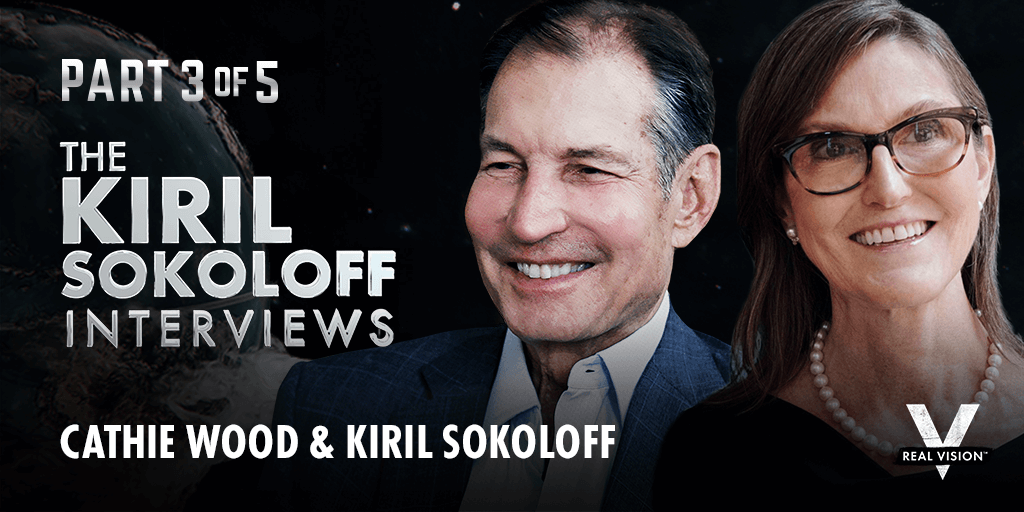 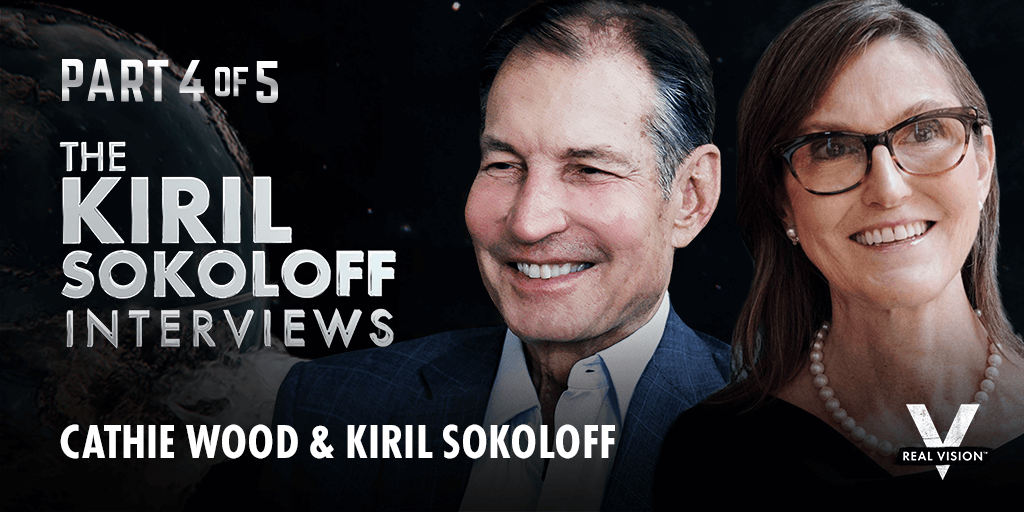 In the penultimate part of the series, Kiril talks to Cathie about why she makes ARK’s research public, why she invites competitors to brainstorm sessions, and how Cathie’s courage “is a function of [ARK’s] research.”

Kiril and Cathie move into all things digital assets for the final part of the series, where they discuss, Cathie’s investment case for Bitcoin, why she thinks it could eventually replace bonds in the 60/40 portfolio, why she thinks the digital assets regulatory issue is going to be manageable, and lots more. 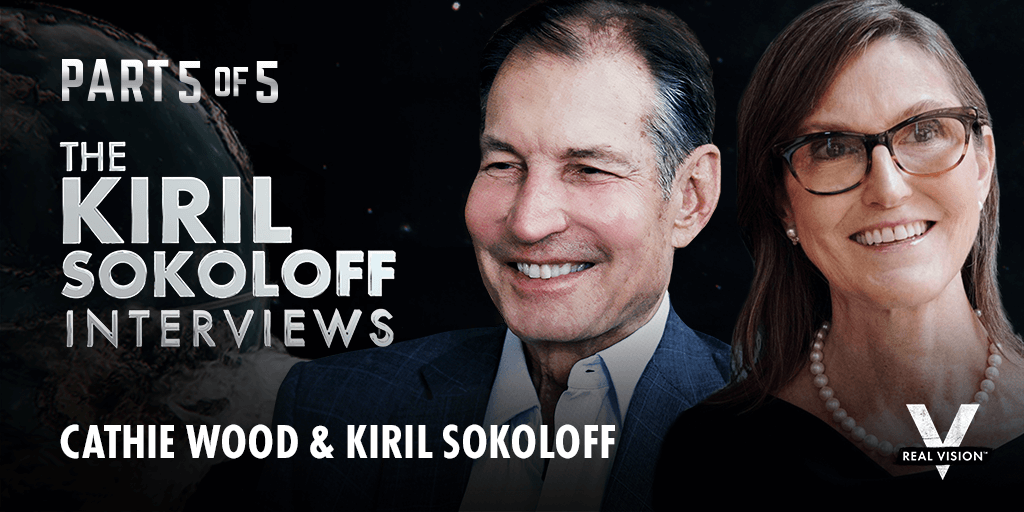 CREATIVE DISRUPTION IN THE EXPONENTIAL AGE 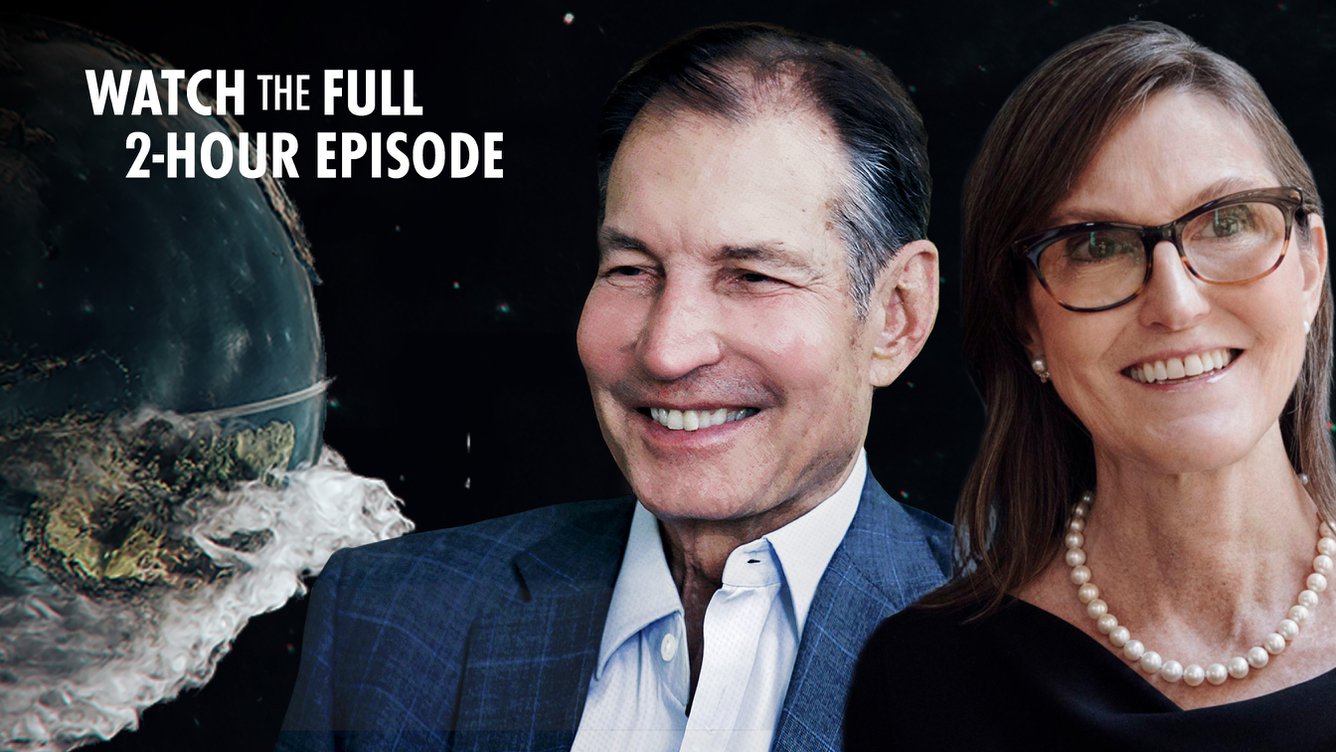 The $75 Trillion Opportunity Coming at Us Fast

Cathie and her team at ARK estimated that just 10% of public equity markets were focused on what she calls “truly transformative innovation” back in 2019. It doubled last year, from $7 trillion to $14 trillion, and Cathie told Kiril:

It’s a remarkable moment in history. And there are few people better positioned to take us on this journey of discovery than two of the most innovative thinkers on the planet.

In this 5-part series of The Kiril Sokoloff Interviews, you’ll also discover:

If you become a Real Vision member, you will have access to the full interview, as well as the rest of The Kiril Sokoloff Interviews and other Real Vision shows.

Here’s what Real Vision members have to say about previous interviews featuring Kiril or Cathie...

“Loved it. The questions were amazing, the answers were incredible and the discussion was an incredible experience.”
Ameya V.
“Vintage RV at its best!”
Robert A.
“Excellent interview. Would love to hear more from Cathie.”
Justin M.
“This was superb. Kiril did a great job - and his interview style is fantastic.”
Dave N.
“This is worth multiples of yearly Real Vision subscription. Such amazing content and great interview.”
Matthew P.
Previous
Next 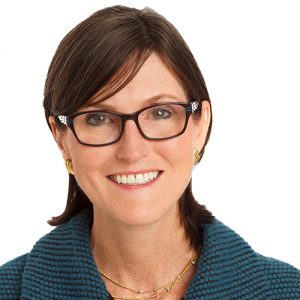 Cathie registered ARK Investment Management LLC (“ARK”) as an investment adviser with the U.S. Securities and Exchange Commission in January 2014.

With over 40 years of experience identifying and investing in innovation, Cathie founded ARK to focus solely on disruptive innovation while adding new dimensions to research...

Through an open approach that cuts across sectors, market capitalizations, and geographies, Cathie believes that ARK can identify large-scale investment opportunities in the public markets resulting from technological innovations centered around DNA sequencing, robotics, artificial intelligence, energy storage, and blockchain technology. As Chief Investment Officer (“CIO”) and Portfolio Manager, Cathie led the development of ARK’s philosophy and investment approach and has ultimate responsibility for investment decisions.

Prior to ARK, Cathie spent twelve years at AllianceBernstein as CIO of Global Thematic Strategies where she managed over $5 billion. Cathie joined Alliance Capital from Tupelo Capital Management, a hedge fund she co-founded, which in 2000, managed approximately $800 million in global thematic strategies. Prior to her tenure at Tupelo Capital, she worked for 18 years with Jennison Associates LLC as Chief Economist, Equity Research Analyst, Portfolio Manager and Director. She started her career in Los Angeles, California at The Capital Group as an Assistant Economist. Cathie received her Bachelor of Science, summa cum laude, in Finance and Economics from the University of Southern California in 1981.

Cathie has been recognized as an influential fund manager across various outlets. In 2018, editors at Bloomberg acknowledged Cathie by selecting her to its second annual Bloomberg 50 list of people across business, entertainment, finance, politics, technology, and science who have defined global business. Additionally, Fortune named Cathie to its exclusive roundtable of experts in the annual Fortune Investors Guide: The Best Investing Advice for 2019 From Fortune’s Experts. In 2016, Cathie received the “Women in Finance – Outstanding Contribution Award” from Market Media. Cathie also has been a featured speaker at the World Economic Forum (China) in 2016 & 2017, the World Strategic Forum (Miami) in 2017, The Sohn Hearts and Minds Investment Leaders Conference (Australia) in 2018 and 2019, and Singularity University’s Exponential Finance in 2017 and Global Summit in 2019.

In 2018, Cathie launched the Duddy Innovation Institute at her alma mater, Notre Dame Academy in Los Angeles. The institute offers a challenging educational experience for young women eager to stretch their learning beyond the boundaries of traditional acquisition of knowledge, while influencing a new way of thinking and learning throughout campus. 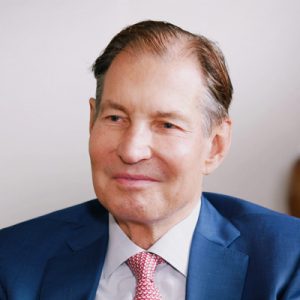 For decades, Kiril Sokoloff has been an active yet very low-profile global investment strategist, thought leader and visionary. He founded 13D Research & Strategy in 1983. Barton Biggs said “Kiril Sokoloff is a breath of pure, fresh investment oxygen. He is invaluable because he is an original thinker and is not afraid to take extreme views.”

Sokoloff foresaw before others the five great secular trends of the last 40 years that have defined investment performance and business opportunity: including the 40-year boom launched by…

the Reagan Revolution; the end of inflation in the 1980s, and the rise of China.

In 1994, Sokoloff moved back to the United States and switched his focus to technology. He fully understood how big the coming technology revolution, the rise of the Internet and e-commerce, and the resulting disruption would be to the world. He advised his clients to go big in tech. In 1994, he cofounded one of the first pure technology funds, resigning later that decade as he thought price increases, speculation and complacency had reached a dangerous level.

In the fall of 1996, noting that Malaysia had built the world’s highest building—historically the sign of a major top—and stock markets were breaking down from two-year trading ranges—Sokoloff turned bearish on Asian stock markets. He wrote over 100 memos predicting the crisis would move from emerging Asia to the emerging world to the developed world and would eventually cause a severe bear market and a massive IT bust in America.

Having been bearish on commodities for the entire decade of the 1980s and 1990s, Sokoloff was looking for a change and he noted that commodities were not going down and in some cases were actually rallying despite the global recession. This was where his theory of anomalies—what should be happening and isn’t—came to the fore. On March 14, 2001, he authored a timely work entitled Buy Gold: Before Central Banks Reflate, which was followed by an epic bull market in gold and commodities in the following decade. Gold was selling at $262.8 at the time.

This was followed by a six-year deep involvement in oil, which he turned bullish on at $20 in 2002. He remained bullish all the way up to June 2008.

In December 2015, Sokoloff saw another paradigm shift. The extreme deflationary trends of the previous eight years, he believed, had reached such an extreme that they would reverse with a vengeance and he launched his famous investment thesis—“The last will be first”—meaning that all those investment sectors that had been destroyed in the past deflationary period would be the leaders of the next investment paradigm.

He is a big fan of Oriental Wisdom. One of his favorite quotes is from Tao Te Ching (Lao Tzu): The best of men is like water; water benefits all things and does not compete with them. It dwells in the lowly places that all disdain, wherein it comes near to the Tao.

We’re on a mission to democratize access to financial intelligence. And we help you understand the complex world of finance, business and the global economy with real in-depth analysis from real experts.

The 120,000+ Real Vision members get a competitive edge like no other on the planet… 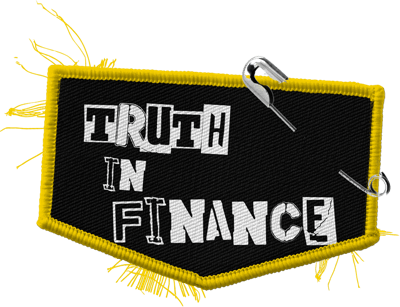 REAL VISION HAS BEEN FEATURED ON