A Century of Secular Macro Regimes 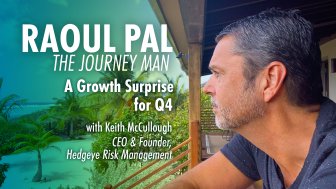 Keith McCullough, CEO of Hedgeye Risk Management, is always a…

A Growth Surprise for Q4

The Fed Can’t Deliver on Its Promises — With Larry McDonald

The Fed Can’t Deliver on Its Promises — With Larry McDonald

A Century of Secular Macro Regimes

In an interview that was recorded for the "What is Money?" show and podcast with Robert Breedlove, Raoul Pal ties together the golden thread for why our economic world and political world are where they are today, and then looks at how this ties into the Exponential Age. Raoul looks back at history: from the fall and decline of the British empire, to the Industrial Age, to World War I and World War II, up to the modern era. He then shifts to the new world and the Fourth Turning, “when society passes through a great and perilous gate in history”, and explains that the American Dream as we know it is dead, and a new world is emerging made up of robots, AI, and where there is no cost in producing energy. Yet in this new world, Raoul imagines a world of hope and optimism, where new identities and communities are formed: the metaverse. “The Metaverse is discovering the Americas again or even a new Solar System. If you think of the world constrained by its GDP, because of humans, productivity, and resources, the metaverse is none of that. There is a possibility that the metaverse allows us, people, incomes in a world free of the constraints, free of the debt shackle. This new world of crypto allows us to create our own world in the way that we want it,” says Raoul. In this special 2 ½ hour interview, you get it all on video! You can find Robert’s "What is Money?" show on YouTube or at http://www.whatismoneypodcast.com Check it out!