RV Blog What Is Avalanche (AVAX)?

What Is Avalanche (AVAX)? 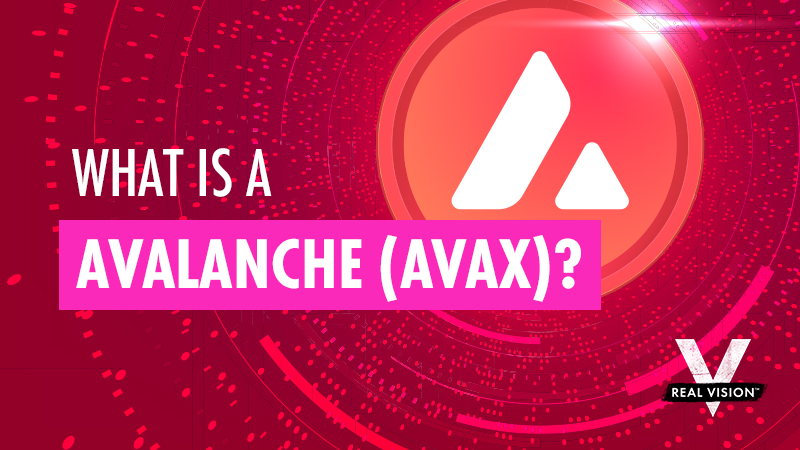 Launched in 2020 by Ava Labs, Avalanche is a high-performance Layer 1 blockchain network that aims to solve the blockchain trilemma of security, decentralization, and scalability with the help of its specifically developed consensus mechanism named Snowball. Like its direct competitors Ethereum, Solana, and Polkadot, the Avalanche network supports smart contracts and decentralized applications (Dapps) to run on its blockchains.

A paper describing the basic idea for the Avalanche protocol was first published in May 2018 by a pseudonymous group called Team Rocket. The paper proposed a new type of consensus protocol that it called Avalanche. The metaphorical name is a perfect description for the protocol’s mode of operation. Just like a single snowflake, a single transaction injected into the network eventually triggers an avalanche of interactions and confirmations.

The idea of the Avalanche consensus protocol was taken up by a group of researchers from Cornell University led by Emin Gün Sirer. The associate professor for computer science and software engineering, assisted by two of his doctoral students, Maofan Yin and Kevin Sekniqi, started to develop the technology. Soon afterwards, Emin Gün Sirer founded AVA Labs with the goal of developing and building the Avalanche network. 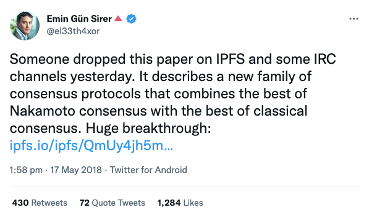 To finance development, AVA Labs did several funding rounds. In the spring of 2019, AVA Labs completed a $6 million series A round. At the same time, the project came out of stealth, published the first version of their whitepaper, and launched the testnet for developers and users. In June 2020, AVA Labs closed a $12 million private AVAX coin sale. One month later, AVA Labs held a public ICO and raised an additional $42 million in less than 5 hours by selling 72 million AVAX coins to the public.

The Avalanche mainnet launched shortly after in September of 2020, only months after another “Ethereum killer” called Solana had launched its mainnet. At launch, Avalanche profited from the Ethereum killer Layer 1 narrative that was dominating the crypto space at the time. The narrative drove the hype around blockchain projects like Avalanche that promised to be faster, cheaper, and more scalable than Ethereum. As a result, the AVAX coin price soared some months after mainnet launch and generated lucrative returns for early investors.

How does Avalanche work?

The Avalanche Network uses three distinctive technologies that separate it from other Layer 1 blockchains. These are:

Avalanche is based on a PoS blockchain consensus algorithm called Snowball. The concept behind Snowball is the following: As soon as a node receives an incoming transaction, it checks if the transaction is valid, and, in addition, asks a small number of other random nodes for their opinion. If a supermajority supports a different opinion than the asking node, the node switches its opinion as well. It then again asks another subset of nodes for their opinion on the transaction. These samples are repeated until convergence is reached and the network agrees on one answer.

To better understand Snowball, think of the following scenario: Imagine a room full of people discussing what to eat for dinner. There are two options: pizza or pasta. Some initially prefer pizza while others initially prefer pasta. Ultimately, though, everyone’s goal is to reach consensus.

Every person now asks the peers surrounding this person what their preference for dinner is. If more than 50% vote for pasta, the person joins the majority and switches his preference to pasta as well. Similarly, if a majority says pizza, the person adopts pizza as their preference. Every person in the room repeats this process, always choosing a different set of peers. Each round, more and more people will have the same preference, until the whole room has reached consensus on one option, which everyone prefers. Avalanche creator Emin Gün Sirer explains the Snowball consensus mechanism in simple terms in this 2-minute video.

Emin Gün Sirer argues that the Snowball algorithm enables the Avalanche network to run with:

The idea of subnets is similar to Polkadot’s parachains and Ethereum 2.0 shards. Each Avalanche subnet is a sovereign network, which defines its own rules regarding tokenomics, membership, and transaction fees. Subnets have their own execution logic, maintain their own state, and have to provide their own security. All Avalanche validators must validate the Avalanche primary network and can, in addition, validate the subnets of their choice.

Creators of subnets can define special rules and requirements (KYC, location, etc.) for the validator nodes running their subnet or require them to provide certain minimum hardware properties. As an example, think of a blockchain game that requires very high transaction throughput, low transaction fees, low latency, but only limited decentralization. Thanks to the Avalanche network, the game developers can easily set up a subnet blockchain with 20-30 high-performance nodes that are able to support the game’s transaction load with low transaction fees. The ready-to-use Avalanche infrastructure allows them to build a customized blockchain with minimum effort.

To address the blockchain trilemma not only on the subnet but also on the primary network level, the Avalanche network consists of three core blockchains that run in parallel. While all three blockchains are validated and secured by all Avalanche validators, each chain has its unique properties. The idea behind the chain split is the reduction of network congestion, thereby configuring each chain for specific use cases.

Avalanche Exchange Chain (X-Chain)
The X-Chain is the blockchain for creating and trading digital (smart) assets. The most important asset traded on the X-Chain is Avalanche’s native coin AVAX. The chain allows the programming of digital smart assets with a set of rules, such as can’t be traded until tomorrow or can only be sent to U.S. citizens.

Avalanche Platform Chain (P-Chain)
The P-Chain is the metadata blockchain on the Avalanche network. It coordinates validators, allows the creation of new subnets and blockchains, and keeps track of active subnets.

Putting It All Together

The Avalanche Network aims to be a high-performance blockchain network that optimizes the blockchain trilemma through subnets. The customizability of individual subnets allows developers to easily create blockchains tailored to their project’s requirements and needs, while making use of Avalanche’s efficient Snowball consensus algorithm. At the same time, the Avalanche Primary Network consists of three specialized chains and is secured by all the validators in the Avalanche ecosystem, which provides high security and decentralization for the core blockchains of the Avalanche network.
RELATED CATEGORIES: Crypto, Defi, Learning