Unbiased, analysis from the leading names in financial journalism. Real Vision unlocks access to experts and ideas you won't find in the mainstream financial news.

The Real Vision podcast helps you understand finance and the global economy, with in-depth analysis from our experts and special guests. Listen in as we translate markets into human – so you can take action.

Stay Up To Date 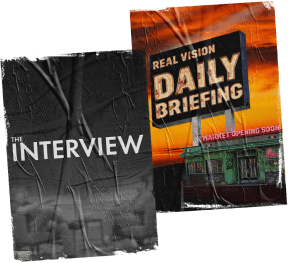 Every week we give you free access to our flagship podcasts, The Interview, the premier business and interview series in the world. Additionally, you get our analysis after U.S. markets close with the Daily Briefing.

If you’re ready to take the next step to unlock even more of what Real Vision offers find the membership that works for you.

Choose your membership level below

Essential insights for all investors

Become a member now and get analysis you won’t find anywhere else.