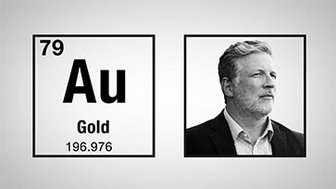 Grant Williams, co-founder of Real Vision, and a host of…

George Milling-Stanley, head of gold strategy at State Street Global Advisors, explains why people should hold at least a small percentage of gold in their portfolios in order to reduce risk and boost returns. This clip is excerpted from a video published on Real Vision on April 15, 2019 entitled "Not Your Average Gold Bull."

GEORGE MILLING-STANLEY: I'm George Milling-Stanley, head of gold strategy at State Street Global Advisors. If you can cast your mind back to the summer of 1972, and if it helps you to picture this, I had an afro at the time, a lot of things have changed since then. I was a reporter on a magazine in London, financial magazine. And the editor came to my door and he said, George, it's been 12 months since President Nixon closed the gold window, what do you think of that? And I looked up at him and said, I've the faintest idea what you're talking about. I don't know what that means. He said, good, because I don't understand it either. I just read it somewhere. But if you and I don't understand it, that means our readers don't understand it either. Go find out about the gold market and write me a story.

And here we are 47 years later, still chasing the same story. I've been involved in gold in a lot of different ways since then. I spent 10 years with the Financial Times writing about the gold mining industry, worked for a gold mining company, running something that we called Gold Market Intelligence. Then I moved to this country to trade gold at Shearson, which gradually became Lehman Brothers. They closed down their physical commodity operations in the mid-1990s. I went to work for something called the World Gold Council, which is a promotional organization financed by the gold mining company. So, back to that area, if you like. And most of what I was doing there was advising central banks on how they manage the whole reserve portfolio, but with particular reference to the role gold can or should play in the management of reserves.

And then after 15 years there, I set up my own little consultancy and thought I was gradually going to wind down until I was working three days a week, and then two days a week, and then suddenly, no days a week. But State Street at the time was my biggest client. And they said we'd like you to come on board, set up a team around the world and transfer your knowledge to them and work yourself out of a job in the next five to 10 years. So, that's four years ago. I checked last week to make sure that the 10-year option is still on the table on having the bull.

I think you really need to look at the whole portfolio. I think that's really where you start from. And I'm not suggesting anybody should have 100% of their investments in gold or even 50%. The literature, the reliable literature, the good quality stuff suggests that any portfolio could benefit from somewhere between 2% and 10% of the total as a strategic allocation. That's a pretty broad remit, if you like. Personally, I think that five makes a lot of sense for me, and probably for a lot of other people, too. We did a study, my team, my Gold Strategy Team at State Street, did a study two or three years ago, where we were looking not at a 60-40 portfolio because nobody has those anymore. We were looking at a global multi-asset portfolio with some exposure to obviously of stocks and bonds, but also to real estate, commodities, managed futures, various other different things and we plugged in various different levels of gold into that portfolio. We started with 2% 5% and 10%.

And what we found was that at the 10% level, that was the biggest reduction in risk over the whole portfolio, and the biggest increase in returns. So, risk-adjusted returns were optimal at that 10% allocation to gold. That was the best Sharpe ratio that we found. Now, I don't walk into meetings and say to people, you've got to have 10% across all your portfolios, otherwise, you're doing something wrong. What I say is, look, if you don't have any gold, try 2%. And you will experience empirically, the good things that a small allocation to gold can do for your portfolio. If you've got 2%, try five, if you've got five, why don't be brave and try 10 and see what that actually does for you. So, that's broadly I think, the reasons why people ought to be interested.

How does gold do this? Why does it succeed in reducing risk and increasing returns? I guess the first thing to say is that a lot people think that because gold doesn't have a coupon or a dividend, it's an asset without a yield. I'm sure you've heard that before. But if you go back to 1971, which is the beginning of the free market in gold, and also, coincidentally, the beginning of my experience of the gold market. Since that time on a compound annual growth rate basis, gold has returned 7.5%. That's actually not too shabby for something that most people think doesn't actually have a return. So, that's one thing- gold does give you an absolute return, or it has done for the last 50 years or so.

Secondly, gold doesn't really have a strong relationship with anything else in a portfolio, not a positive relationship or a negative relationship. It's an uncorrelated asset as the economists call it. That means that it's giving you a level of diversification within the portfolio that few other assets can match.

Third, gold is a huge market. It's very deep and liquid. It's dominated by the over the counter market, people to people, principal to principal, rather than the futures exchanges, which is where most financial assets are actually traded on the futures exchange. Gold's unlike them, completely different from them. So, a very, very deep and liquid market turning over according to the most recent studies in excess of 100 billion dollars a day. That's the whole gold market.

Now, that's dwarfed by Treasuries, but then everything's dwarfed by the Treasury market. But it isn't that far behind Japanese government bonds. It's comfortably ahead of the UK gilts market or the German bund market, or any other government bond market you care to mention. So, I think gold earns its place in the mainstream on liquidity grounds as well.

And then finally, the overall impact on the portfolio. I've already mentioned the Sharpe ratio. I've mentioned that gold can help to improve risk-adjusted returns and that can be demonstrated. Gold also has thousands of years of a track record. You can't say that about every asset. You can't say it about Bitcoin for example. Gold has thousands of years of a track record as offering some protection against the unexpected whether your tail risk is macroeconomic in nature or geopolitical. So, its portfolio impact is beneficial. Those I think, are the main reasons why people ought to be interested if they're not.