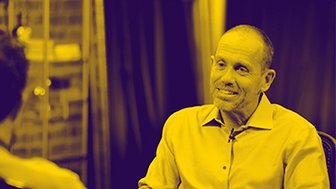 How I Got My Start in Finance · Featuring Danny Moses

Danny Moses, a private investor and entrepreneur, was made famous by Michael Lewis' book, "The Big Short." He tells Larry McDonald how he started in the finance industry, and how he met the group that was featured in the famous book and movie. This video is excerpted from a piece published on Real Vision on March 5, 2019 entitled "'Big Short' Trader on Today's Opportunities."

JUSTINE UNDERHILL: Welcome to How I Got My Start in Finance. In this episode famed investor Danny Moses tells Larry McDonald how he made his break and joined the team that made one of the biggest calls in financial history. Moses' experience even played out on the big screen in the movie The Big Short.

DANNY MOSES: So my dad was a finance professor. So I kind of grew up all around investments and finance. I probably didn't understand a lot of it at the beginning. But from the age of eight or nine I was looking through the business section looking at the two stocks that my father owned.

And he said tell me if the stock got to a certain level, we could get a dog. So I'd keep tracking the stock Oxford Industries. And it went from 9 to 10 over a period of a year. So I told him, hey Dad, the stock's at 10. He goes, 20.

And so I always had an interest. I was always tracking. And then I found out what these companies did and it was very exciting. And I knew what he did. So he was much more in the box in terms of investment analysis. But being able to track that over time was really interesting.

From there, I thought I was going to be a sports broadcaster. When I was at Emory University I actually interned at CNN. And so I thought my calling was sports broadcasting. Although maybe I've morphed into something by sitting here in studio with you.

But my friends all moved to New York from Emory. And instead of going somewhere in the Midwest to cover high school football to get my start I decided I would try that. So I became a municipal bond analyst at MBIA, ironically, since they ended up blowing up. Which had nothing to do with what I was doing at the time, covering airports, college university bonds and so forth.

LARRY MCDONALD: You're break on the credit side.

DANNY MOSES: Exactly, saw the credit. And actually saw the Orange County crisis in 1994, I believe, sitting from MBIA. So we had to have these meetings in the auditorium. Those were my first brush with what could go wrong when you lend money to something.

And obviously as you well know in Orange County, it turns out that the controller of the county was doing some risky things with the money. And it just wasn't all on level.

Got my MBA back at Emory for a year. And then came back to Oppenheimer in 1996. And that's where I met Steve Eisman, Vincent Daniel, and Meredith Whitney.

LARRY MCDONALD: So that's the key group from the movie, from the book.

LARRY MCDONALD: So not many people realize this. You were all together on the Street for years before you went to FrontPoint.

DANNY MOSES: Correct. So what's really interesting about that is-- so, I'm a salesman coming up to New York. And I had been in New York but not really city guy. And you meet Steve Eisman and Vincent Daniel from Queens, right?

And they were covering subprime then. So the first iteration of the subprime blowup with 1998, 1999, 2000-- the home equity lenders, the subprime auto lenders. Ugly Duckling, Aims Financial, all these names.

And Steve got up on the podium one day. So, you know how the analysts come out on the morning call and they give the reports. They said, the following 10 stocks are going to zero.

And so there was an older gentleman that I worked with. I was kind of his assistant in the sales. And I was covering some of his accounts. And I'm like, can I go out with this call?

And that was the first time I realized, from a bottom up perspective, they were already looking at Moody's and S&P's credit pools. Not saying that Moody shouldn't have downgraded these things yet.

But they were looking at that the cash was being trapped, the performance of the loans. And that was the first time that I really thought to myself, you really need to understand the balance sheet and fixed income--

LARRY MCDONALD: So for the viewer watching us right now, a lot of people come up through Wall Street or get into finance. And they look at an equity, but in some cases, as Steve points out in the The Big Short movie, the equity might be just a sliver of the entire company or the capital structure. Get into how you look at credit and equity? Does credit always lead equities typically?

DANNY MOSES: It depends how it's funded. If it's depending on the financial markets to fund itself then the answer is yes. Because if something goes wrong in the underwriting process, if you're a subprime auto lender or a mortgage lender and you're lending poorly it will catch up with you over time. There's only so long you can go on with that.

So just take a step back. And then I can jump forward to why that process repeats itself-- and you've done the same type of work before-- is that people don't peel back the onion to look.

They see an equity, they think it's an equity like company. They don't realize where they're getting most of their income from, which is selling these loans in the secondary markets. That's how they're generating their earnings in the performance of those loans.

So Steve taught me then, and Vinny taught me then, that's the stuff you need to be looking at. And that was a different way to look at stocks per se. But certainly this is more pertinent for the financial services sector than any other sector, I would say, in terms of some type of financial engineering to look at.

So that was banked in my mind. And then fast forward, Steve left to go to the buy side to Chilton, I believe. Shortly after 2000 Vinny went to Keefe Bruyette. And I found myself at Friedman Billings, ironically.

And Friedman Billings FBR was the company that actually created the subprime mortgage companies, the lending companies. New Century, Accredited Home Lender, Saxon. So here I am with the knowledge that Steve and Vinny gave me five years before, watching Friedman Billings create these Trojan horses so to speak. Not saying they did it intentionally, I'm saying they were vulnerable.

Fast forward again, late 2005 I left Friedman Billings. I could see the writing on the wall. And I really wasn't into promoting or pushing anymore of these stocks. And joined what, at the time, was a client.

So that's where Steve, Vinny, and Porter Collins had come together from Point Partners. And so they needed a trader. I had never really been a trader. But I understood the portfolio and been around the Street enough so--

LARRY MCDONALD: So this is FrontPoint Partners. What is this?

DANNY MOSES: 2006. They had started in 2004, let's say. When they assembled their team, they had lost their trader. And they were actually a client of mine. So in 2004 and 2005, while I was at Friedman Billings we were talking about the subprime market. And we were reminiscing about 1998 to 2000 again.

So working with them, even when I was on the sell side before I joined them on the portfolio management side, the knowledge that they gave me made me that much smarter. That was my true MBA was 1998 to 2000. And then I guess PhD Steve gave me in 2006, 2007, and 2008 during that process.

JUSTINE UNDERHILL: Starting as a municipal bond analyst, Danny Moses called the Orange County Credit crisis from his desk in New York. He met Steve Eisman and ended up being on the team featured in books and film. For Real Vision, I'm Justine Underhill.