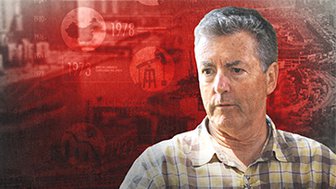 Nick Sofocleous, senior vice president at Sanford Bernstein, joins Tony Greer of The Morning Navigator to discuss his experience navigating volatile markets as an inexperienced trader in 1987. Sofocleous talks about how Black Monday in October of 1987 colored his perspective for the rest of his career. This clip is excerpted from a video published on Real Vision on July 1, 2019 entitled "A Bull’s Warning."

NICK SOFOCLEOUS: I knew absolutely nothing.

TONY GREER: Yeah. So let's start right at the beginning, August of 1987 when you got your start in the markets.

NICK SOFOCLEOUS: So, yeah, fun times in London. So a teenager coming out of school--

NICK SOFOCLEOUS: Yeah. Well, not quite.

NICK SOFOCLEOUS: But as close as you can get. And it wasn't on a desk, and you weren't on the phones, because there weren't enough phones for everybody. You weren't in front of screens, because there weren't enough screens for everybody. So you had to work your way up. And that was post Big Bang in London. There were some real jobs and real people in London in those mid '80s.

TONY GREER: And you got started right on the buy side, correct?

NICK SOFOCLEOUS: I did get started on the buy side. I was very lucky. There were some people that decided to take a bit of a punt on someone that was fairly good with numbers. That happened to be me. Yeah, it was a really fun time. The 25th of August 1987 was peak market, pre-crash of October '87.

NICK SOFOCLEOUS: I knew absolutely nothing, and everybody around me was busy. And they were busy learning. They were busy trading. There were busy assets allocating. And then after August of '87 in October of '87, we came up with a bit of a crash. And those days were amazing, because when you know nothing, you learn everything. So through the days in London, there was the hurricanes in '87, Lloyd's of London, it was touch and go whether they were going to be around, they had massive losses, the crash of '87 in the US stock market. And there was one particular day, I remember it. I turned around to a colleague of mine, really senior, a great, great asset manager. And I turned around to him and I said, so yesterday, we were buying. But today, we're not. Can you explain that? And he politely asked me to sit down and mind my own business for a minute.

TONY GREER: Stay out of the way for a minute.

NICK SOFOCLEOUS: That's right. Yeah. That was right. It was '87.

TONY GREER: So now you're in the middle of the firing lines. There was a market crash that takes the S&P down 22% or so. And we probably wallowed around those levels for the next year or two before, I guess, the S&P broke out again in 1990. But what's stuck with you from back then? What lessons did you pull away from being in such a volatile market with such little education at the time? Because I know all of that gets flipped on its head to where we are today.

NICK SOFOCLEOUS: Right. Right. That's really interesting. What do you learn from '87? You learn from really smart people in '87 to keep calm, that if you can keep your head while all about are losing theirs, you're going to be just fine. And that's really difficult to do in high volatility environments. But that's what I learned from '87.

TONY GREER: That's a very good point. So from there, you started making observations on markets, taking them very seriously and picking up some tools into your toolkit as you grow as a trader. So into the early '90s, we kicked the decade off with a war in the Gulf, we start moving into the very, very beginning of the internet boom, the infancy stages, I would say, in the early '90s, '92, '93. Tell me about your experience on the buy side as a young, now, someone in your early 20s going into that experience.

NICK SOFOCLEOUS: And you're having to read these red herrings. There's no email, and you're placing orders to buy these IPOs. And every day, there's more IPOs. Now, history has told you, if you could sit through '87, through 1990, and '91, you were in a bonanza situation in '94 and into '95. Fast forward, you start getting into the Fed, cheap money, Greenspan doing everything that he can do to calm everybody. Then, Greenspan turns around and says irrational exuberance. And you think the bubble has burst. Far from it.

TONY GREER: Now we've got Amazon is delivering everything to your house already. Right?

TONY GREER: Starting with books and CDs, but we're getting there.

NICK SOFOCLEOUS: Fast forward '98, and LTCM blows up. So the lesson of '97 into '98 is, as much as you think it matters in Russia, it doesn't matter until it's on your doorstep. And your doorstep was LTCM in '98, which was another episode of, if you can keep your head while all about are losing theirs, you were in great shape, because then you rode late '98 into '99 into early 2000s.

TONY GREER: Right. So now, do you recall yourself thinking about your first days as a trader in the stock market sort of crashing back then, back in October of '87? You know, are you worrying about this the whole time? Are you seizing your opportunities on all the dips and stuff?

NICK SOFOCLEOUS: It's so funny you should say that. That's so true. In your first experiences, you always think they're going to be replicated very soon.

TONY GREER: So the markets are rallying ferociously into '98, '99, toward the dot.com bubble, which we haven't gotten to yet. But in 1999, I know you made a tremendous life decision to change time zones, life centers, and everything.

TONY GREER: Tell me, what was that about? How did you pick yourself up from being so entrenched in the markets in London and saying, OK, we're going overseas?

NICK SOFOCLEOUS: Yeah, that's interesting. So early '99, I get a call from the company in New York, Sanford Bernstein. And they basically asked me, do you want an adventure? And I thought to myself, I've traded US now for probably 8 years. I've been observant of the market now for 12. If you want to be in the lion's den for US equity trading, you have to be in New York. So I said, I'd love to be part of that adventure. They were kind enough to say, we'd love to have you. And off I came from London to New York. Now, the interesting thing about moving countries-- and a lot of your viewers will see this, a lot of people will understand what I'm saying-- is it's damn difficult.

TONY GREER: Oh, I can imagine.

NICK SOFOCLEOUS: It's damn difficult. So the people that you thought that you knew well in a city of, any time, it could be 24 million people. You know, the 12 million here, 24 in the tri-state area. You actually don't know anyone. It can be the loneliest experience. So what that teaches you is, take everything one step at a time. Don't cross bridges you don't need to cross until you're asked to cross them, because there's too much to take on board.

TONY GREER: Oh, I can imagine.

NICK SOFOCLEOUS: It's one step at a time. Trying to do anything well takes steps.

NICK SOFOCLEOUS: And that was a huge lesson for me.