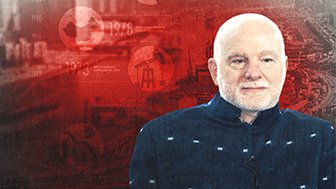 Michael Sonnenfeldt tells the story of how he struck early…

How a TIGER Earned his Stripes

Stephen Roach, former chairman of Morgan Stanley Asia and author of "Unbalanced: The Codependency of America & China," discusses a fortuitous turn of events in his career that coincided with an economic boom in Asia. This video is excerpted from a piece published on Real Vision on November 30, 2018.

STEPHEN ROACH: Toward the end of my Morgan Stanley career, right around the time of the financial crisis, right around 2007, the CEO of the firm, John Mack, said, you want to give up your job as our chief economist and go to Asia as the chairman of our Asian businesses and be our senior executive on the ground in dealing with Asian governments, Asian clients, Asian investors? And I said, no. I mean, I'm an economist. I mean, I want to live and die as a chief economist.

Well, it goes back for me about 20 years. In the late '90s, I was heading up Morgan Stanley's global economics team. I was the chief economist for the firm based in New York, but I'd travel the world and spend a lot of time in Asia. And out of the blue comes this Asian financial crisis starting with the devaluation of the Thai baht in the summer of 1997.

And one by one, these so-called miracle economies of Asia crumbled. And we had a highly-ranked economics team by the various investor polls. And we had a horrible forecast. So it was a great source of humiliation for me to see our forecast in tatters. And so I had this hunch that somehow, China would hold the key to the endgame of this crisis.

If China went the way of Thailand, Korea, Indonesia, and devalued their currency, who knows where this crisis would have gone. I'd been to China a few times. But I had no idea really what was going on. So I started going to China in earnest in the second half of 1997, went every other month. And it quickly became evident to me that China was very different.

And I just got hooked on China at that point and started writing about China. I had a sort of a Hong Kong-based Chinese economist who was working for me. But I became fascinated with China from the Wall Street perspective and wrote about China and its ability to deal with this crisis in a way that was very, very different.

And so I wrote an article in the Financial Times, I think in early 1998, that made the case that coming out of this crisis, China would emerge as the new economic leader of Asia. And Japan, the pre-crisis leader, would lose its role as the dynamic economy in the region.

And my friends in Japan hated me. They wouldn't speak to me for years. [LAUGHTER] And the Chinese were a little bit embarrassed by this but certainly welcomed the outside view. And the rest is history. I just kept going back and back to China.

And toward the end of my Morgan Stanley career, right around the time of the financial crisis, right around 2007 the CEO of the firm, John Mack, said, do you want to give up your job as our chief economist and go to Asia as the chairman of our Asian businesses and be our senior executive on the ground in dealing with Asian governments, Asian clients, Asian investors?

And I said no. I mean, I'm an economist. I mean, I want to live and die as a chief economist. And he was a pretty forceful guy, my CEO John Mack. And he said, I want you to think about it very, very carefully. And I talked it over with my wife. And I thought about it. And I said, this is a unique opportunity. I've had a fantastic job. I'm going to take this job.

And it turned out to be five extraordinary years of being on the ground in Asia, spending half of my Asia time in the People's Republic of China, and allowed me to really dig into what then became my passion. And now I teach it about it at Yale. So that was a sort of a brief travelogue of how I got from a US-based economist to now a professor of teaching about China.

INTERVIEWER: With the benefit of hindsight, it seems such an obvious call to make that China would rise and Japan would fall. But at the time, it wasn't. I mean, can you take us back to what China was like back then? Because it's a world away from how we know it today. And also some of the signs you saw that made you crystallize this opinion because you were an outlier at the time.

STEPHEN ROACH: Yeah, back in the mid to late 1990s, there was a lot of suspicion about China. It had literally been sort of 10 years after the sort of the devastating political turn of events in Tiananmen Square in June of '89. China was aspiring at that point to join the World Trade Organization feeling that this was the means to really get involved in driving and shaping global trade.

But the China Dream was just a dream. And there was little concrete evidence that China was poised for the type of takeoff that was about to occur in the 2000s. The economy had actually been growing very rapidly in the 1980s and early 1990s but off a small base and still was very much state-directed, state-owned. The big state-owned enterprises accounted for the bulk of the business activity.

The Asian crisis came along. And the policymaker who really made a difference to me in both getting to know him and watching him operate was the prime minister at the time, Zhu Rongji, who used the crisis as an opportunity to really force through some dramatic reforms on how who owned the state-owned enterprises, started bringing these companies to market. Morgan Stanley was participating in that.

And he thought strategically. And he was very open to sort of the analytical approach I had in discussing it with me and others about what some of the challenges were that he had to address. And so I watched China basically as an outside observer deal with this devastating crisis, '97, '98, learning that the last place they want to be is in a position of being too dependent on short-term, external debt, not have enough currency reserves to defend their currency if it came under pressure.

And slowly but surely, they took their foreign exchange reserves from, at the time, it was like 50 billion US, up to a peak a few years ago of 4 trillion and used that reservoir reserves and this vast stash of saving to plow it back into their economy, investing in infrastructure, plant and equipment, and eventually, education reform. And they became a legitimate, full-blown powerhouse.