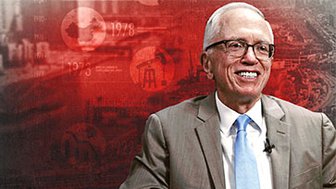 Dan Tapiero, co-founder of Gold Bullion International, joins Real Vision CEO and co-founder Raoul Pal to discuss where bitcoin fits into the new global macroeconomic picture. Tapiero says that bitcoin and other cryptocurrencies are still in their infancy, and argues that the market’s lack of meaningful understanding of what bitcoin really is presents a unique opportunity to get in early. This clip is excerpted from a video published on Real Vision on July 22, 2019 entitled "The Future of Macro Investing."

DAN TAPIERO: Bitcoin has more flexibility than at least some of the naysayers. There are a lot of naysayers out there, say, oh, it's too slow, it's too clunky. Again, that's part of its strength, the solidity. And then as time goes on, it becomes more and more secure. And the price of securing that network goes up in value more and more. It's almost exponential.

RAOUL PAL: So when you look at the macro landscape and you see this, is this just kind of dwarfs everything else in macro opportunity land?

DAN TAPIERO: Yeah. I mean, it's-- so the thing is, you have to be careful with hyperbole. Because you know, the answer is yes. But if you start out with that, people think you're nuts. And especially my-- you know, all the guys I work for. I mean, I think people over the age of 50, OK, or maybe even 40, 45, have a really hard time. Because we're all so used to snatching up these little phrases from the Facebook or from Twitter, or from a newspaper article. And you know, very few people have digested the whole thing.

And so you hear these phrase-- oh, digital gold. And so someone who owns gold will say, oh, that's crazy, you know, I'm never selling my gold for this thing that's up in the air, right? Like, I don't know what this is. That's crazy. But I actually get-- just getting back to the gold thing for a second, I just think those are the people, they shouldn't be being attacked. Those are the people who are going to be the first adopters from the next group of people. Because they already understand the concept of debasing fiat and an alternative currency.

The people who are long-- you know, those are your cousins. They shouldn't be attacking them. They should be sort of trying to even almost combine with them. Because they're similar mentality. It's the people in the traditional investment space who are nowhere near, you know, they don't talk about fiat. They don't understand what's gone on with monetary systems globally.

So they don't even get the macro. And then you're trying to-- the Bitcoin people are trying to then not just explain the macro but then overlay the super complex infrastructure network on top of that. In terms of explaining why, it just becomes very, very difficult and murky.

RAOUL PAL: That's why I think it's interesting. We looked at the trend of the people. I mean, the brain drain out of macro into this is huge. And the interesting one for me, because he is that communicater, is Jusko. Because Mark is actually really good at explaining to the institutional people--

RAOUL PAL: Because Mark, you know, yes, he's incredibly personal and he gets across very well.

RAOUL PAL: And he's a great guy, but he also understands how big a macro opportunity it was. It kind of like he was like, OK, this is it. I mean, shifted his entire business to this.

RAOUL PAL: And he can communicate, hopefully, with at least some of the institutional guys to get them to understand.

DAN TAPIERO: Yeah, but you need 1,000 of them. And I think it's-- and I actually think it's a very small group who have switched over.

RAOUL PAL: Dan Morehead was the first of all the people I knew. There was a bunch of guys, Chad and Emil, who were GMI guys that you know as well, ex Goldman guys. They were extremely early, maybe even earlier.

RAOUL PAL: They were Bitcoin mining from their office because they got free electricity.

RAOUL PAL: And then it started-- then Nova, I think, and then John Burbank was super interesting. Even Alan Howard's got a Bitcoin group.

DAN TAPIERO: But it's very small.

RAOUL PAL: Jim Pallotta. I know. But what's interesting is these are really, really respected people.

DAN TAPIERO: Yeah. Yeah, yeah, for sure. So the people in politics and the leadership, and I would say even the leadership of the top companies, where a lot of capital resides in the traditional world, they don't know these people and they're very far away and they're not connected. And I mean, this is an opportunity for you, I think, to create a platform to reach out to the more traditional investment world, explaining to them what is going on and why it's important.

RAOUL PAL: Yeah. That makes total sense. So for you, it's a really big universe because it's not just Bitcoin. But your particular attraction right now-- and knowing you, it will change over time, as you discover new things-- is you're saying, OK, the one bet that you can have is Bitcoin.

But what do you think of, therefore, these other parallel universes? They're all part of the same digitization of the world, which is like, I wrote that big GMI article this month about it, but digitization of all assets, and therefore the value of everything is digital now. And this is the architecture for all of that.

DAN TAPIERO: I think there's tremendous value. I mean, I think if you're new to this space and you want to get involved, Wences Casares, yeah. He wrote this piece three, four months ago that was brilliant. He says put 1% of your net worth into Bitcoin. If it goes to zero, whatever. If not. I think he almost said at one point-- this was a few years ago even-- it was irresponsible not to have 1% of your portfolio in Bitcoin. And again, I think you should have a lot more. But that's a good way to begin to think about it.

RAOUL PAL: The other person that's also involved in this is Mark Hart. Mark's always a good thinker as well.

DAN TAPIERO: Yeah, of course, Mark. Yeah. And I listened to your interviews with Mark in '17. He was right on.

You know, everyone creates-- because it's so hard to define in one sentence, everyone says, you know, well, Bitcoin is like this. It's like the rails for the world. Or Bitcoin is like gold and Litecoin is like silver, you know. People are-- we're still trying to define it. And I think there are lots of opportunities. But I don't think that unless you're going to do a lot of work and you're going to be able to do as much work as someone who spends their entire life on it, I don't think you go in and just buy Bitcoin gold, or chain, or any of them, Monero.

Any of-- there are a lot of valid enterprises. But I think you can just stick to Bitcoin as an entry. Because that's the innovation, the invention. These other things-- but look, Ethereum is, again, I'm not the right guy to talk about this, but I mean, it's programmable.

DAN TAPIERO: I mean, you could do lots of things. The second layer at the conference, I heard there was a guy talking about how, there's the lightning system, which increases the speed of transactions of Bitcoin, but also that you can build a settlement feature into the second layer above Bitcoin. Now not sure exactly what he meant. But I listened to the presentation, and I listened to it again. And I took it to mean that, OK, well, Bitcoin has more flexibility than at least some of the naysayers-- there a lot of naysayers out there, say, oh, it's too slow, it's too clunky.

Again, that's part of its strength, the solidity. And that as time goes on, it becomes more and more secure. And the price of securing that network goes up in value more and more. It's almost exponential, right, because--

RAOUL PAL: Well, it is exponent-- has been exponential all the way through.

DAN TAPIERO: That's right. And so I want to get back to the value thing for a second, just because--

RAOUL PAL: I want to come back to that as well.

So you can start to think that within 10 years, the Winklevoss million dollars or Draper's $250,000 in the next few years, it's not unreasonable. And so what is the bet? The bet is to buy and to do nothing else. That's it. Unless you're going to be involved in a fun business and you're going to be trading and this and that. But I don't even think that's-- I think that's not really needed.