No Going Back: The Post-Pandemic Economy 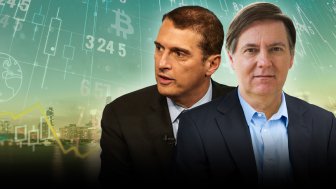 Decentralized finance is attempting to fix a problem. What’s the…

Shortcut: The Supply Chain Crisis is Far From Over

Shortcut: The Supply Chain Crisis is Far From Over

The Supply Chain Crisis is Far From Over

The Supply Chain Crisis is Far From Over

Will There Be a Global Famine This Year?

Will There Be a Global Famine This Year?

Finding New Ways to Do Business in Industry 4.0

Finding New Ways to Do Business in Industry 4.0

Behind the Curtain: How Crafting the Right Message Works in Financial Market Narratives

Behind the Curtain: How Crafting the Right Message Works in Financial Market Narratives

Can Banks Survive in a World of Regulation and Tech Disruption?

Can Banks Survive in a World of Regulation and Tech Disruption?

“Godfather of Smart Beta”: Tech May Be the New Nirvana but Disruptors Get Disrupted

“Godfather of Smart Beta”: Tech May Be the New Nirvana but Disruptors Get Disrupted

No Going Back: The Post-Pandemic Economy

In the wake of the pandemic, Jim Bianco believes that “there is a wholesale change underway in the economy.” But is it all doom and gloom from here? Not necessarily. We appear to be in a period of transition, which, historically, has also been a catalyst for economic progression. Bianco introduces Martin Fleming, Michael Drury, and Sal Mercogliano to discuss the changes we’re experiencing today, how they're impacting the economy, and what the future could begin to look like. Recorded on March 13, 2022

JIM BIANCO: I'm Jim Bianco, and this is Real Visionaries.

In this installment of Real Visionaries series, I want to discuss a big issue that seems to not get in the coverage that it needs to. And that is the change in the economy because of the pandemic, which might have been one of the biggest economic events of our lifetime, because we sent everybody home for a year. And coming out of that, things are changing, and we're not going back to 2019.

We need to understand what those changes are, why we're having those changes, and how we should look at the economy as we move forward from here. And instead of waiting for returns of the past, think about where we're going in the future. I put together a series of people to discuss this with.

I'm going to lead off with Martin Fleming. Martin Fleming is PhD in Economics. He has worked at IBM for 20 years, he works for various think tanks, including the Productivity Institute in the UK. And he authored a paper about the fourth industrial revolution, The Technology Revolution.

And we discussed in that the big changes that started way back in the 1970s, with the invention of the Intel processor, and continued through today, and how those changes are accelerating, and they're accelerating into digital currencies, crypto currencies, and the way that business is being done.

MARTIN FLEMING: A digital currency, of course, you can send me an email, and I'm going to get the email three seconds later. Why does it take me six days to get my $15 million? A digital currency, of course, eliminates all of that lag, improves productivity, improves efficiency of economic activity. For those in the financial services sector, who are making a living off that six-day lag, there is enormous resistance. But that's only going to continue for so long as we have learned over and over again. Where there is a technology, there will be a useful solution.

JIM BIANCO: Then I want to transition to an economist friend of mine, Michael Drury of McVean Trading. Michael has been an economist now for over 40 years, and a purveyor of the economic landscape. He started way back in the early 1980s working at DRI and some other organizations as well, too.

And with Michael, we're going to discuss a lot of what we see in terms of what's happening day to day, the changes in the economy, the great resignation, how the nature of work has changed, how the nature of because work has changed and so much of our life was oriented around going to work every day, what we purchase and what we order, how we live our lives, how we dress is changing in the wake of the pandemic.

MICHAEL DRURY: The price of a lot of goods is high enough that you're into demand destruction, and people are substituting for some services. But will you ever go back to where you were pre COVID? I greatly doubt it. You talk about are people traveling? The airlines are a classic example of this. If you want to buy an airline ticket today, the most expensive ticket is Saturday and Sunday, exact opposite of what it was pre-COVID.

The walk up ticket, the prices, they now decline as you get closer to the date of because there is no walk up business and they don't want that seat to go in. If you're willing to wait till the very last minute, you get the best deal. Whereas they never did that because there was a guy who was going to walk up and drop $2,000 to go to San Francisco.

JIM BIANCO: And then I'm going to end it with Sal Mercogliano. He is a professor of history at Campbell University. He has a PhD in the marine sector. He also teaches at the Merchant Marine Academy the history of shipping and the history of ocean vessels. And he's also a military historian.

The answer he gave was they're not sure what to think about, so the answer is they order everything. That's why we have this chronic shipping shortage. Sal is also a military historian. And we also then delved a little bit at the end into the idea of the Russia-Ukraine war, and how that's going to just exacerbate the problems with shipping as we move forward from here.

SAL MERCOGLIANO: It's estimated about 3% of the world's containers go in and out of Ukraine and Russia, which doesn't sound like a huge amount, again, 3%, it's fairly small. But what this means is with the container companies self basically regulating themselves and sanctioning Russia, what that means is all those containers that were selling to Russia that were in the system heading to Ukraine now are either stuck on ships, or have to be offloaded, which means there's going to be congestion in ports.

It also means those containers that were moving in and out of those areas are now out of the system, which means that the potential for reloading them and empties, they're gone all of a sudden. And again, what you're seeing here is another hit to the supply chain that throws another massive kink into it, and it creates disruptions.

JIM BIANCO: As we go through the three interviews, hopefully the impression you're left with is there's something more going on here than an uptick in inflation, whether it's transitory or not, and is it a correction in the stock market, and how much more is it going to run. But there is a wholesale change underway in the economy.

Now that I've said that, a lot of people think that that's some dark dystopian comment that we're going to go to some terrible place. Not really. The last time we saw a big change in the economy like this was World War II. After the end of World War II, we did not say, okay, it's 1945, 1946. How did we do business in the 1930s? And let's go right back to that.

No, we looked in we said, the world's different. The world's changed. And the way we want to end up doing business was the way we eventually want of doing business in the 1950s. Everything seemed to transition through the war. I think we're in a period of transition right now, and that's what I wanted to try and delve into with these interviews is to discuss what is happening, why it's happening, how it's impacting the economy in terms of shipping, and hopefully, where we go from there.