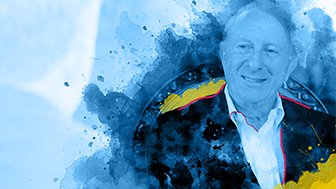 Roger McNamee, author of "Zucked: Waking Up to the Facebook Catastrophe," discusses the similarities between social media companies and tobacco companies. This video is excerpted from a piece published on Real Vision on February 22, 2019 entitled "Facebook and the Future of the Social Internet."

ROGER MCNAMEE: When I look at this situation, I believe that we, the humans, formerly known as users, have way more power than we realize.

We do have the power to influence our elected representatives. And they are really listening. They know that all of us trusted tech for a long time, and we're now paying a price, because we didn't see the trouble coming. And I think for the regulators, this industry is so much less complex than health care, banking. They'll figure it out.

Essentially, what is it, 2 billion people a day across Facebook's three properties are coming in. 2 billion is a lot of people.

BRIAN PRICE: It's volume that rivals the world's largest religion.

ROGER MCNAMEE: Exactly. That used to be the monthly number just for Facebook itself. But I think across the three, they're getting close to 2 billion every day. And you know, it's like a billion half on Facebook, and I think half a billion across the other two.

And at that scale, that's a lot of attention that they control. And they have gotten a lot of people addicted.

So people-- if you're addicted, you're going to need help redirecting your attention.

BRIAN PRICE: You compare it to the tobacco industry.

ROGER MCNAMEE: Yeah. And again, I think analogies are helpful, because they give you a frame of reference. And when we think about tobacco, it took a long time for tobacco to kill people. And when it did, they killed a lot. And with chemicals, it took a long time for us to figure out that we needed to protect people from it. There are pieces of both of those analogies that fit this perfectly.

BRIAN PRICE: So what is social media NicoDerm look like?

ROGER MCNAMEE: Let me take it looks like for me. Which is in the book, I have chapters on what the policymakers should do, what we can do as individuals to draw attention. To protect ourselves against the emotional contagion. So on Facebook-- I still use it. I use it primarily around the band and around the book.

ROGER MCNAMEE: Moonalice is the name of the band.

ROGER MCNAMEE: So I don't do any politics on Facebook anymore. And I used to do a ton of politics. I would-- I treated it like a blog. I would post the news stories I thought were significant with comments. But I don't do that anymore. To the extent I do that, I do it on a product called Quartz. And I don't let anybody push my emotional buttons. Or when they do I, don't respond.

I used-- there were all these people on my feed, and I would just argue with them, right? And that's just a terrible idea. Don't do that. And I just post a lot less than I used to. I look a lot, but I post less. On Google, it's a different thing. On Google, I realized that I wasn't so hooked on Google that I couldn't cut loose completely. And so I decided to turn it into a game.

And you remember the old video game, Frogger, where you're the frog, you got to get across the river, and you jump up from log to log. Well, in my version of Frogger, Google is the river. And the logs are the various applications I use instead of Google.

So these are the Microsoft productivity apps, and Microsoft email. This is DuckDuckGo for search. One password for signing in and logging on. Ghostery for browser or Apple browser. I get my news from Apple News and from now, dozens of news sites. And I get my maps from Apple Maps.

Now I hop across these logs and every once in a while, I'm on the web, and I'll look at a restaurant thing-- and I'll hit the map, and it'll turn out to be Google Maps. I fall into the river, I have to start again. But by treating it as a game, I've made it fun.

And on Facebook, I've gone to a bunch of my friends and made it a group thing. And I think this is really important. And that's the big prescription relative to your kids, which is develop playgroups where you have device free days. For parents, just changing a behavior seems set a good role model for your kids is really important.

Making sure that it's OK to go out and play. That it's OK to daydream, right? Because it turns out those are-- now that we've had a chance to try the other, people are going back to the old fashioned way of raising kids as the best way to do it. And I don't think I have all the answers, but I give you a framework for figuring them out. And my hope is that people will find a real benefit in that. Because if you want to delete the app, god bless.

BRIAN PRICE: What stopped you from deleting it? Through this emotional journey you've, gone at some point, you must have said to yourself, I'm just deleting this and taking it out of my life.

ROGER MCNAMEE: To be clear, I've just written a book, the audience for which is people who are on Facebook and Instagram. I have to reach them, OK? And my point is, I don't want to be hypocritical. I don't want to tell you have to delete it if I'm not going to delete it. I'm saying if you want to delete it, you may. I have chosen not to. I have a a band. 11 years ago, we put our entire communications with our fans on Facebook. It's really hard to move that off. They didn't become a monopolist for nothing, right? I mean, they really have tremendous market power. And so I'm stuck.

BRIAN PRICE: Well, I guess what I'm hearing is that Facebook has become an integral tool in our day to day lives.

ROGER MCNAMEE: I mean, if you're an advertiser, it's literally something you can't live without. And I would rather find a way to coexist. That's why you know when you get the comments from Facebook, I think the whole thing is so peculiar, because my goal is to make it safe.

BRIAN PRICE: I guess what my concern is that we're relying on people who have all the control, who know that we can't live without it. So what's their incentive to change?

ROGER MCNAMEE: Well, that's my point. I want to make it so they have an economic incentive, which is if somebody gets hurt, you have to pay. And I think if Google understood that there would be an economic cost from parents because free Chromebooks turned out to have a high cost because kids get addicted to YouTube, or get addicted to various video games that they're playing instead of doing their homework, that would slow them down a lot.

Now I'm all in favor of-- I'm really big on ending the digital divide. I think kids need to have access to technology. But there's a right place and the wrong place. The right place is at home, the right place is in study hall, but not in the classroom.

BRIAN PRICE: Classrooms should revolve around what the teacher is doing.

ROGER MCNAMEE: The teacher is doing, right? And I'm no expert, but I've read a lot about it as part of the preparation for this. I just think it's really important.

BRIAN PRICE: With education in mind and what the role of technology can be in a classroom, in a home for an individual, how do you differentiate between good tech companies and bad tech company?

ROGER MCNAMEE: Great question, Brian. Business model. What is the difference between Facebook, Google, Instagram, YouTube, and Apple, IBM, Salesforce.com? The latter three sell a product to customers. The first one all have advertising basis models based on free products. The Problem Is the products aren't really free. It's just that you don't value the data you're giving up properly.

And when there is an honest exchange of cash to get a product, both sides have a much better set of incentives to make the relationship work. There is something predatory about making your product appear free when it's not. And we see this in the financial services business all the time. There's a company here in New York or Robinhood, which in theory is free trade. But it's so predatory, because there's a real cost to doing that stuff. Nothing is free. And the transactions are priced to reflect the ignorance of the people in that market, that they're bearing the cost and the price received in a sale or that they pay in a purchase, as opposed to giving a fee.

And you know, I'm sure people at Robinhood are great, but I think those kinds of business models are the flaw right now in the whole economy. And we need to teach people that everything has a cost, and to have them value it properly, and make choices in ways that are less likely to produce long term harm.