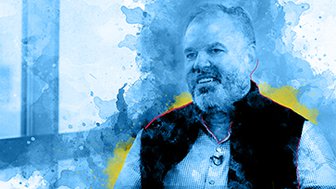 Howard Morgan of Renaissance Technologies joins Real Vision's Grant Williams to discuss a host of issues facing big tech today. Morgan suggests that the privacy-convenience pendulum has swung to convenience in recent years and that the changing narrative around big tech means that pendulum’s direction is about to change. This video is excerpted from a piece published on Real Vision on March 22, 2019 entitled "Failure as a Forerunner to Success."

HOWARD MORGAN: I think with any big change in society, you go a little bit too fast for most of the population. And then you have to slow it down. And I think that certainly happened with some of the technologies. I think our notions of privacy have had to change. I mean, people of my age had a notion of privacy that's very different than what my grandkids have as a notion of privacy. What they're willing to share, what they're OK sharing. And I think that has needed some change.

And I think the Europeans have led the way there, because of perhaps, their learned reactions for it with governments that have been overly aggressive in both World War II and beyond. They're much more concerned about personal privacy than we in the US.

And it's a trade off between convenience and privacy. And most people are willing to give up a lot of privacy for convenience. And I will say that having Amazon know what I want and show me that ad as opposed to showing me some random ad-- it's actually pretty useful. It saves my time. So I'll give up some privacy for that.

I think we've given up too much. And I think we're getting ready to pull back on that. And I don't think Facebook, I don't think Mark and then Sheryl understood how some of that data was going to be used. And I think they're realizing that and being forced to in some ways.

HOWARD MORGAN: But I don't think the tech lash is going to be too terrible. I think the benefits are so outweighing the negative consequences.

INTERVIEWER: Is it something that is recoverable? For something like Facebook, for example, where it was such a generational tool when it began. All the kids were using it. And then the parents come on, so the kids go away in their droves. But once you get that name, once you get on the wrong side of the press and the wrong side of the narrative, more importantly, with so many of similar platforms coming through, is there a way to recover the higher ground? Or once that starts, are you battling forces that you really can't control?

HOWARD MORGAN: I think Facebook can recover. Because with several billion users, it's very hard for somebody to come and take that away. It's just got too many of your friends on it, and too many people, too many of your connections on it. In the same way that challenging Google today is very hard. It'll happen eventually. You know, just as you Google challenged Microsoft, and made great changes.

But they're pretty aware of all the competitors. And look, the first thing they did, they bought Instagram, they bought WhatsApp. They understood what things could be challenging. They didn't buy Snapchat, although they would have if Evan had been smart enough to sell. But then they could clone any of the features they wanted into Instagram, and they already have a much bigger user base.

So I'm not as worried for Facebook. I'm still long term bull on Facebook and on Google, because they have so much of the infrastructure in there for us. But I do think there will be new entrants. That's one great thing about technology. We thought that Apple was dead. Apple turned out to create the iPod. I think the one of my partners, Chris [INAUDIBLE], has on his wall the great poster, which is hell froze over. And that was when Steve Jobs allowed the iPod to connect to

INTERVIEWER: But I'm interested in particularly Facebook. I want to stick with this just for a minute, because no matter what the company seems to do now, the narrative in the press is instantly negative. You know, I haven't read a positive Facebook story for quite some time now, which is a complete 180 from where we were three or four years ago. And I just start to feel as though there's tremendous capital to be made-- political capital, social capital-- out of piling onto these techs, onto these evil tech companies selling our data.

Given the political climate we're in, is that a real threat these companies, both from narrative and from taxation? Which obviously, is another big problem.

HOWARD MORGAN: I think there's a threat, but there are ways-- for example, at Uber, first round along with benchmark and some others, was able to say, Travis, it's time for you to leave. And that changed the narrative. The narrative in the press was a woman was killed by an Uber driver. The narrative in press wasn't, seven women were killed by New York City Taxi drivers and one Uber driver.

And that's where we are with Facebook today. I think maybe if there's some senior management change there in the next two years, that narrative will change and can change. So I think because the narrative is not just about the company, but it's about the people and their lack of empathy for what was happening at the time. I think they have it now. But as you say, the press loves piling on, right? But I do think you can change that narrative partly by changing people.

INTERVIEWER: And what about the taxation? Because that is something that particularly in Europe, they're going after the big tech company.

HOWARD MORGAN: Well, I mean, there's always been taxes. The tech companies pay their taxes. They employ lots of lawyers and accountants to pay as little as possible. You get things like that the Dutch Irish sandwich, [INAUDIBLE]. And everyone does it. And then somebody says, no, we're going to give you a tax amnesty to bring your money back into the US, and a lot of money flows back in. You've got to pay, the same thing will happen in Europe.

These companies, when you have 42% EBITDA, you can pay some tax.

HOWARD MORGAN: And I think if that's what it takes, they'll pay the tax. I don't think they're going to be taxed out of existence by any means.