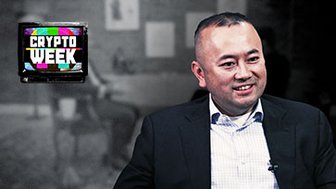 Michael Moro is the CEO of Genesis, one of the…

An Inside Look at the Big Money’s Bitcoin Trading

The Macro Backdrop: Why Bitcoin? Why Now?

The Macro Backdrop: Why Bitcoin? Why Now?

Goldmoney founder and CEO Roy Sebag takes the other side when it comes to Grayscale Bitcoin Trust's recent 'Drop Gold' campaign. In this conversation with Stephan Spears of McEwen Mining, Sebag argues that gold is not an enemy that bitcoin needs to dethrone, but rather an accomplice in shaking up the fiat currency system as we know it. Filmed on June 26, 2019 in New York.

ROY SEBAG: It would be super easy to shut this down or to regulate or tax it. And it's certainly not as anti-fragile as the evangelists like to proclaim.

The size of the Bitcoin market cap today should already be powering an economy probably the size of one or $2 trillion.

I've always seen the two in this potato sack race against the fiat money system.

STEPHAN SPEARS: I'm Stephan Spears. I'm an engineer and executive with McEwen Mining, a New York listed precious metal mining company with exposure to gold, silver and copper. I spent the majority of my 17-year career involved with precious metals, gold on the investment side. And on the mining side. I'm here today in New York with Roy Sebag, my friend of 10 years or so. And we're going to talk about gold, about Bitcoin and about the 'Drop Gold' campaign that's been controversial lately.

Roy, good to see you.

ROY SEBAG: Good to see you, Stephan. It's great to be here.

STEPHAN SPEARS: Absolutely. So, as I mentioned, we've known each other for quite some time now. You've had a very interesting career, maybe you could start by telling us a bit about yourself.

ROY SEBAG: Sure. I've been investing in the capital markets for about 16, 17 years. And I started out being essentially a long short value investor, and very quickly transitioned to a specific niche within investing called distressed investing, focusing on bankruptcies and re-orgs and spinoffs and other event driven type of strategies. And it was through that prism that I really started to become a contrarian, almost immediately noticing that oftentimes, a lot of the conventional wisdoms that were proselytize in the market weren't true. And very quickly from there, I found myself being very contrarian about the housing market in 2006, '07, the CMBS market, the subprime market, traded that in the right way, capitalized on it and discovered gold initially as a portfolio diversifier but subsequently developed a very strong passion for the precious metals and began to actually actively invest in the life cycle of precious metals, everything from exploration to production, to development.

And it was around 2012, '13 that I decided to transition from being a portfolio manager to an entrepreneur, I founded something called BitGold, which was essentially a gold-backed digital platform that went on to grow to about one and a half million customers and 1.8 billion Canadian dollars in assets. Today, that company's known as Goldmoney. Since then, I've continued progressing within the gold industry, starting a jewelry brand, and doing a lot of other things. But one of the reasons I guess, that we're here today is I've also been the founder of a company called Bitfarms, which owing to my experience in exploring and mining for gold, avail to me this opportunity of mining for cryptocurrencies very early on. And so, even today, I'm one of the largest shareholders of this company that is, by our estimations, the largest cryptocurrency miner in Canada and perhaps North America.

STEPHAN SPEARS: Interesting. So, the subject matter at hand is the 'Drop Gold' campaign around about May 1st, there was a national ad campaign rolled out by Grayscales Management extensively telling investors to sell their holdings of bullion and to buy bitcoin through the Bitcoin Trust.

SPEAKER 1: In a digital world, gold shouldn't weigh down your portfolio. You see where things are going, digital currencies like Bitcoin are the future. They're secure, borderless, and unlike gold, they actually have utility. Leave the pack behind. It's time to drop gold.

STEPHAN SPEARS: You had a pretty strong immediate reaction to that campaign. So, can you tell me why it's different to you than just another asset manager or trust company trying to get market share from another asset class?

ROY SEBAG: Yeah, well, it wasn't immediate, actually. I was hoping someone else would do it. But about two months in or a month and a half in, I noticed that there weren't really well-articulated arguments on the other side. And I guess I just want to preface this with I personally have nothing against Bitcoin or cryptocurrencies. In fact, it's quite the opposite. I am not only exposed to cryptocurrencies rising and Bitcoin specifically rising. But I am actually very sympathetic to the project of cryptocurrencies as reorienting a society back to sound money principles. So, I don't really have a problem with the ethos of Bitcoin, or even Bitcoin being a successful project.

I guess my issue stems from seeing how these evangelists of Bitcoin trying to humble us with our piety about this being the greatest thing ever and rising, and we know we're in it for the mission, and we're in it for bringing down the fiat monetary system. All of a sudden, at some point, shifting from attacking the fiat money system as a problem to noticing the $8 trillion of gold and precious metals that have been held in exchange and transferred for thousands of years as being some a low hanging fruit funnel into the flow demand of Bitcoin. And to me, that was a red flag that required some response. Because it feels to me like some oedipal revolt, a revolt against the father, where gold is the father.

It's very difficult to me from where I sit with the knowledge that I have acquired to see how you could argue that Bitcoin not only displaces gold but succeeds without gold. And to me, I've always seen the two in this potato sack race against the fiat money system.

STEPHAN SPEARS: So, you firmly got your feet in both camps? You're hoping that Bitcoin actually becomes more anti- fragile through the debate and discourse that you've initiated? For those that haven't read the paper, let's just get a little bit into the nitty gritty of that. You discussed the crux of the matter is basically the difference between the natural physics of gold and the mathematical abstraction of Bitcoin, can you go a little bit more into the differences?

ROY SEBAG: Yeah. So, the way I look at the world in terms of an economy is I actually like to use the word 'cooperation', human cooperation. And at the end of the day, the reason I think that we're able to make predictions and cooperate is because the laws of nature, laws of physics, whatever you want to call them, are immutable. They're irreversible, and they're immutable. And they never change. And because they never change, we're able to essentially observe, measure, predict, and repeat various activities between each other as we seek to cooperate and achieve prosperity.

And so, what we find is that things that are from the mind that are abstractions, or of memory, generally don't last. Their ideations, their trends, very academic term, but logical pluralism, there is no definite truth. Whereas things that are of nature are the load stars, they're the Polaris that allows us to cooperate. They're the sun, so to speak.

Now, when it comes to the difference between an element which is corporeal, and something like Bitcoin, what you essentially have to understand is that the element doesn't need anything other than the laws of physics to exist. Whereas Bitcoin is an abstraction. It's a system where humans come together and decide to allocate resources towards the reification of this abstraction so that it continues to perpetuate into the future. If humans do not cooperate towards that goal, that abstraction ceases to exist.

Where this really comes together, is if you consider that the economy