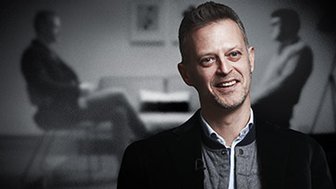 The “Everything Bubble”: An ECB Insider’s View

Why is it that equity returns are at record-highs – and yet beating the market is harder than ever? Josh Wolfe, co-founder and managing partner at Lux Capital, sits down with Mike Green, chief strategist and portfolio manager at Logica Capital Advisers, to explore this question. After Wolfe discusses a few of his recent successful venture exits, the pair discusses how excessive liquidity is making it harder to deploy capital, a process Green calls "alpha-degradation." Other topics include Tesla, Bloomberg, and the "first-mover disadvantage." Filmed on January 23, 2020, in New York.

MIKE GREEN: The market is no longer the market as people think about it. There are exploitable phenomenon, but it requires a complete rethinking of how you approach the problems.

JOSH WOLFE: The skill level is rising, and so the variation between investors is increasingly attributed to luck. Then, like you say, the undulating landscape changes and suddenly the game that you thought you were playing, you're no longer playing. Something like 95% of companies that are now reporting non-GAAP earnings, they're making up funny metrics. Now, we saw this in WeWork on the private side when you had community adjusted EBITDA, Tesla is like ground zero of like ridiculous terms like, what are delivery sales? What does that actually mean? There's a lot of companies that are just using funny language because in a bull market, people are less scrutinizing and so I think that's really a ripe situation where you have lots of non-GAAP accounting terms that are signifiers of risk.

ED HARRISON: Hi, Ed Harrison here for Real Vision. Now, in today's interview, we have two Real Vision favorites. We're going to have Mike Green interviewing Josh Wolfe. They're going to be talking about elevated valuations in the private markets, but they're also going to be talking about public markets as well. With the liquidity risk that comes alongside private equity and passive indexation to wide ranging conversation that addresses politics, the labor markets, Tesla, and what they call the first mover disadvantage, it all makes for a fascinating conversation that you won't want to miss. Enjoy.

MIKE GREEN: Well, you can tell by the smile on my face, I'm happy to be here. I'm sitting down with one of my best friends, Josh Wolfe, so excited to be back here in New York and chatting with you. Welcome back to Real Vision.

JOSH WOLFE: Symmetrical happiness. Always thrilled to be with you.

MIKE GREEN: Every time you come on the show, we get to talk about a new success. Last time, we talked about the magic. You were so excited about CTRL-labs, and pushed you on the idea that maybe you were falling in love with something and where's my sales commission?

JOSH WOLFE: Man, we got to do these interviews more often. It's been a streak of good luck.

MIKE GREEN: With CTRL-labs, now, you sold it to Facebook. Remind people what CTRL-labs is, remind me why you're begrudging in the sale. What do you think Facebook wants to do with something like this?

JOSH WOLFE: The thesis behind CTRL-labs which led to three nights of sleepless nights in pursuit of this entrepreneur, Thomas Reardon and Patrick Kaifosh, his co-founder, was premised with this intercepting phenomenon that I call these two arrows, one of inevitability, and one of the perception of the impossibility. Inevitability is this directional arrow of progress where it doesn't necessarily tell you who the entrepreneur is or what the company is but there's this inevitable high probability that this is the way that technology is trending. The impossibility is when everybody else in the field, peer VCs, just don't see it. They think, oh, that'll never work. It's impossible. Impossibility ends up dictating low prices or less competition and inevitability raises our confidence and conviction.

In this case, the arrow of progress, the inevitable, was the idea that something we call the half-life of technology intimacy. This buzzword that we coined but basically 50 years ago, you had a giant ENIAC computer, you physically went up and pulled some plugs and buttons. First half-life, 25 years ago, you have a personal computer and you're tickling the keys, you're touching the monitor, you're flipping the power switch on the back. 12 and a quarter years ago, the next half-life, you have a laptop, physically touching your thighs, becoming a little bit more intimate with you, you trade the mouse for a trackpad.

That directional arrow of progress, the inevitability was computability was becoming more and more intimate and close to you. We shared that thesis with a lot of people and then we ended up meeting this researcher at one of our other companies, Charles Zucker, who's a PhD neuroscientist. He said you got to meet this guy, Reardon. Reardon was the inventor of this technology that we use called Internet Explorer when he was at Microsoft as a young guy.

He was one of 17 kids, 10 biological, seven adopted. Just insane family situation. Bill Gates taps him, he goes and works at Microsoft for a decade from '90 to 2000. He's also Bill's right hand guy during the monopoly DOJ trial. Then after making a lot of money and being technologically renowned and reasonably wealthy, he does what anybody would do in his shoes, he starts another company, Openwave, which ends up creating a mobile browser that we all use and then goes back to college and gets a degree in Classics in Latin.

Then spends the next near decade getting a PhD in Neuroscience, where the thesis he was working on is this myoelectric response. The idea that you could detect from the surface of your skin, the roughly 15,000 neurons, that innervate roughly 14 muscles in your hand, which is important because if I'm typing, my brain is telling my fingers to do something. If I am turning a knob or switch or a lever or doing anything, my brain is subconsciously telling my hand to move.

MIKE GREEN: We talked about this last time. You highlighted that even if we go back and look at the Tom Cruise film, Minority Report, where he has this dynamic and he's moving this, he's wearing gloves, he's making the gestures, et cetera, what Thomas Rutan figured out was that that subconscious thought was actually sending a signal that they are then restricting and so the process of learning how to type on Mavis Beacon is actually just your brain sending those signals to your fingers, your fingers then figuring out how to do it, and you're training that interface back and forth. CTRL-labs basically shortcuts that process.

JOSH WOLFE: It can detect your intention to fire your muscle and move it before you actually move it, which makes that, because if you have 1000 neurons that are activating a single muscle, if there's 100 of them, and if you were to do this now and you think about just moving a finger, you get the sensation, this feeling of that finger, and it can detect that. I became obsessed with the entrepreneur, I lost sleep in pursuit of the deal for three nights. My wife, when she finally met Reardon was like you, you're responsible for this household duress.

It was an amazing experience, but it was too short. It was too short. It was about a year and a half, almost two years and Facebook made an entry on the company, which we rejected. Zuckerberg came back and made a more persuasive entry. These founders, some of whom, unlike Reardon, had never made money before. It was very compelling, the amount of capital that Facebook was going to invest into the company on an ongoing basis, as well as the liquidity that people were going to get now.

I wish we would have held it longer. I truly think this would have been a $10 billion business instead of something a little under a billion dollars, but it was a great outcome for our investors and a thrill to be part of what I think is going to be a historic technology that we will all be using.

MIKE GREEN: Now, I want to come back to this but this also brings up another topic that you and I've discussed before, which is basically the concentration of capability inside companies. What we have very clearly seen are companies like Google and Facebook, Apple, Microsoft, have become very acquisitive. They have an extraordinarily low cost of capital and have been able to buy these. Do you think for Thomas Reardon as he thinks about going inside Facebook, that that creates a limitation or that that changes the trajectory of the technology versus its original vision?

JOSH WOLFE: I'll give you two answers because I tried the no answer. I tried the moral suasion. I tried-- and this was at a time when Zuck was in front of Congress being lambasted as a poster child of technological excess and election meddling. I'm trying to make the case, my God, you are going to take a technology that can capture your neural intention and give it to Facebook? You're going to spend the next two years in front of Congressional committees yourself. I tried emotional suasion with my kids, saying don't sell, sending videos to the board. We don't trust Facebook. I tried financial suasion to do a secondary in capitalized business.

In the end, I think Reardon actually had a very rational view of this. Again, he worked for Bill