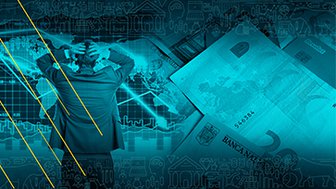 Is there a case for buying beaten-down European bank stocks?…

Considering the recent coverage of negative economic indicators like WeWork's failed IPO and the repo market meltdown, it seems like the cycle is beginning to turn. So, AK asks a question as old as the economic cycle and one every trader and investor asks themselves: "Is this time different?"

AK: Recently, the word recession has been on everybody's mind. Last week's repo market madness, the failed WeWork IPO, and general geopolitical tensions might be signaling that the cycle is starting to turn. Of course, we got to ask ourselves, is this cycle different, or is it similar to everything we've seen over the last 50 years? We're going to talk about all that and more on this week's episode of Real Vision's The One Thing.

What's going on, investors? AK here. At some point in the finance game, everybody's going to be faced with the question, is this time different? Now, most of the time, the answer is going to be no but sometimes things are actually different. Andy Lapthorne recently joined us at Real Vision to talk about our current unprecedented bull market compared to ones in the past.

ANDREW LAPTHORNE: Fearful of saying this, but this time is different. I know it's deadly to say that, but if you look at bull markets over time, they're driven by economic prosperity. If you decompose your returns from equities, bull markets are driven by earnings growth. You get an economic acceleration, you get earnings growth going up, and that then pushes equity prices along. Normal things happen, interest rates go up, the yield curve steepens, bond yields are rising, value stocks are outperforming defensive stocks. That's the normal flow of data stretching back multiple decades.

ANDREW LAPTHORNE: Yeah, classic business cycle. Even in the 1990s, which had a big tech boom, globally, it was driven by profits. Yes, the NASDAQ was through the roof and the YASDAQ was through the roof, but primarily, it was a profit driven story. What we've seen globally over the last five or six years is a market solely driven by valuation change, solely driven by a feeling that you could rewrite certain stocks, because they assumed to be less risky than cyclical stocks, which you know are risky.

AK: Most bull markets in the past have been fueled by earnings growth, which has led to economic acceleration but Andy explains in this cycle, instead of earnings growth fueling it, it's all about valuation change that's pushing prices higher. He's saying that this time is different. Of course, there's plenty of debate on that topic. Ken Grant joined Real Vision recently to talk about how he agrees that the current bull market isn't fueled by profit. He explains that because asset prices have been buoyed by extreme monetary policy, that even if the real economy slows down, the capital economy might keep expanding. Here he is explaining what that means and how he's playing it.

KEN GRANT: Well, I think the profits recession is real. It's statistically corroborated. If I'm not mistaken, we had our two consecutive quarters of negative earnings growth as of the second quarter results, which came out this summer. These are things that are happening out there and it's going to be a high drama reporting cycle that will start the second or third week in October. My guess is that profits remain impaired. This is a problem.

Now, here's the counter side to that, because this is a real important part of the message that I'm trying to convey in my business, is that if you look at a declining profit picture, then the mathematical implications of that, the price earnings ratio, is higher and a lot of people in the markets, a lot of investors are trained, very justifiably so, to make these valuation comparisons. P/E ratios, all of the valuation metrics are already extended. My very strong advice to anybody who cares to listen to it is that you have to ignore them, because this is uncharted territory. We've never been in a situation where we're approaching $20 trillion of debt assets that are priced to negative yields where there are countries where the mortgages are negative. This is something which makes you have to throw out all those books.

By the way, I'm not suggesting that everybody load the boat here but I am always really leery of the short side. I'm more leery than I've ever been of it here. I think you have to make money by buying dips. I am not expecting the profit picture to improve immediately. My belief is that it's not going to-- even if it's a disaster, all that's going to do is mean that if stocks get cheaper, buy them.

AK: Grant points out that the $20 trillion in negative yielding debt is a major factor that's different in this cycle. He also says that we're heading for a shaky earnings season and possibly a full earnings recession. Grant suggests a tactical play to buy the dip as the earnings recessions shakes up the equity markets. However, Lapthorne warns that there are bigger fish out there. This cycle might be different from previous cycles and that it could brush off an earnings recession but if a real recession hits, well, that's going to be a huge problem. Lapthorne explains more.

ANDREW LAPTHORNE: It's nothing real and therefore, the risk is in a recession. Let's face it, I don't think anyone believes we'll never ever get a recession. At some point, there will be a recession, at some point, markets will go down a lot. That's when you'll see all this stuff materialize as being problematic.

AK: Increased monetary policy, rising geopolitical tensions and increasingly negative indicators are telling us that a recession is inevitable. Grant and Lapthorne argue that it won't be the earnings recession that causes the collapse, but still a full blown recession will have catastrophic effects on the market just like earnings recessions used to. This time, we got to be aware that just because the markets can face an earnings recession and be okay, that does not mean that there's not another trigger lurking in the shadows. What will cause it is anybody's guess, but we're already tracking that at Real Vision. If you want to join in on that process, make sure you subscribe. I'll talk to you next week.