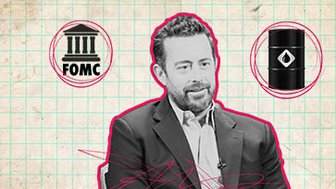 Tony Greer, editor in chief of The Morning Navigator, breaks…

What the Fed Cut Means for the Treasury Trade

Michael Gayed, CFA, portfolio manager at Pension Partners and author of the Lead-Lag Report, updates his thesis on reflation, and reviews where he thinks the yield curve is headed next. In this interview with Jake Merl, Gayed breaks down the Fed's decision to cut interest rates, highlights why more quantitative easing may prove bearish for bonds, and notes which sectors should outperform in the months to come. Filmed on September 23, 2019.

JAKE MERL: Welcome to Trade Ideas. I'm your host, Jake Merl, sitting down with Michael Gayed, portfolio manager at Pension Partners and author of The Lead-Lag Report. Michael, great to be back on the show.

JAKE MERL: So I believe we last spoke about six or seven weeks ago. And this was right after the Fed cut rates for the first time in July. This was the first rate cut in a decade. And I know you thought the first time was a mistake. However, since then, we've seen a second rate cut just last week. So I'd love to get your thoughts of what you make of the situation and if you think this second rate cut was a mistake or not.

MICHAEL GAYED: In general, I think that the Fed cutting rates is probably a mistake, all right? Purely because, as I've said before, this is a game of psychology. The Fed should try to instill confidence in the marketplace. And these incremental declines, I don't think, are really going to make that much of a difference, especially when you have all this other cutting by other central banks globally.

Now, what's more interesting to me is not the direction of the rate cuts, I mean, not that we're seeing more rate cuts, but that there's the potential that we may be re-entering another phase of QE, something which maybe a year ago was laughable, the idea of you'd have another round of quantitative easing. When you look at the balance sheet, the Fed has obviously contracted quite a bit its assets, but just last week or so, increased by about $25 billion, because of some of this turmoil that's happened in the repo market. And Powell himself alluded to the idea that the Fed may need to restart balance sheet expansion.

Now, if the Fed does go in that direction, or at least floats the balloon out there that they may do that, I suspect you're going to have traditional behavior in the bond market take place, which means that every time the Fed has enacted some kind of balance sheet expansion, some kind of QE, the bond market sold off.

MICHAEL GAYED: Completely, right. So the argument there is, that if the Fed's going to do something on the balance sheet side, that that creates an increase in inflation expectations, which actually causes the yield curve to steepen. Now, given the tremendous bullishness and, I think, complacency that's out there in the bond market, the fact that everyone is so afraid of negative rates, which, don't get me wrong, are very concerning, but at the same time, could be an overreaction, I suspect you could very easily see the mother of all corrections in the bond market here. Especially if the Fed does try to threaten this potential that the balance going to expand, that should cause bonds to sell off.

And I think that certain sector investors in the stock market are starting to sense that. When you look at financials, which would benefit off of yield curve steepening in the US, they're starting to improve. If you look at EUFN, which is the European financials ETF-- also starting to look like it's starting to improve-- I suspect you'll probably see a move towards yield curve steepening globally, something which we haven't seen in a long time. Partially, that's contrarian to me, but it's one of those things where, if everyone's betting on one outcome, the payout is always highest if you bet against the crowd. And I think betting against the crowd here is actually betting that the yield curve is going to start to do what it should be doing in a growth environment, steepen.

JAKE MERL: So we actually had Tony Greer on just last week. And he basically gave a similar thesis. He was also bearish on bonds. But he was looking at just a short-term tactical move, where the 10 Year could go back up to 225 or so. Are you looking at it just like that? Or do you think it's more of a longer-term picture, where we've seen the bottom in rates, and that's it for the cycle? So how are you looking at it?

MICHAEL GAYED: So I think the widow-maker trade has always been trying to call the bottom in rates. No, I think it's much more tactical. From contrarian perspective, there's so much excessive bullishness there.

The other thing I'm watching is-- we talk about lumber and gold before. I co-authored a paper that won an award, talking about lumber and gold, and lumber as a leading indicator towards economic expansions in bullish environments. Lumber relative to gold is starting to actually turn up. So after a prolonged period of lumber weakness, which is foretelling some kind of weakening in demand for money for mortgages, for housing, that's now starting to improve. So I suspect, again, from a tactical perspective, there are a lot of things that are starting to confirm this idea that the bond market may have entered already a correction. And it could be a meaningful one against simply because there's so much money there, that is complacently sitting around thinking that yields will only go more negative, as opposed to actually go positive.

JAKE MERL: So as the yield curve steepens-- I know you mentioned you used to go long financials. And some of these other asset classes should benefit. But what about the US dollar? I know you're expecting that to weaken. Are you still expecting that?

MICHAEL GAYED: I still think the Fed and every central bank is playing a game, not of interest rate wars. It's currency wars. So I still think that you're going to probably have the dollar weaken. And it's also pretty crowded trade.

Keep in mind, that when you talk about the dollar, you have to talk about also, not just in terms of the broad market basket. Most dollar indices that people talk about are very heavily weighted towards the euro. So the dollar, as other currencies, actually started to weaken, all right? So I think the dollar is still going to be an area that you want to bet against. It hasn't really made new highs, when you look at these broader indices. Again, what's more intriguing to me is that you are starting to see a move towards the things which would benefit from yield curve steepening. Yield curve steeping should, I think, also coincide with the weaker dollar, because that means inflation expectations pick up with that currency depreciation.

So I think we are starting to see a pretty interesting shift here. For asset allocators, value may make more sense than growth finally, after over a decade. For asset allocators betting on banks, betting on emerging markets, this reflation thesis, I think, still is there. It's not a 20-year call. It's just more of an observation about, where's the payoff the highest here?

JAKE MERL: And speaking of emerging markets, I know, in previous interviews, you've recommended going long EM, versus the S&P 500, expecting about a 20% or so outperformance. Are you still expecting that?

MICHAEL GAYED: Yeah, I mean, jokingly I'll say, I'm early, not wrong just yet. Look, I go back to everyone is so heavily weighted the S&P. And it's worked. There's no question it's worked. But cycles still exist. At least, I have to believe they still exist. And at some point, the cycle for US large cap outperformance will end. And it could and also with small caps playing catch-up against large caps.

A lot let people say the market is at new highs. I always have to say, what market are you talking about? Small caps are not at new highs, emerging markets, Europe. I mean, a lot of things are nowhere near new highs. It's just the S&P. So while it certainly has been the trade-- or the investment, I should say, that's worked for some time, again, I go back to, if you want to be greedy when other people are fearful, people are fearful of being in anything outside of the S&P. So why not be in things outside of the S&P?

JAKE MERL: So Michael, with all this in mind, what would you say is the biggest risk to your thesis that this reflation theme might not play out?

MICHAEL GAYED: I think it's time, all right? So it's like the Rocky Balboa movie. Times undefeated, right? The longer that it takes for the reflation theme to come true, the more the market becomes entrenched in the disinflation/deflation narrative. And I think, then you could have very nasty reset downward, actually, to the cyclical things which have not participated on the upside. As the S&P has levitated higher, at some point, something's got to give. Either the S&P collapses down to everything else, or everything else catches up to the S&P.

So the longer that it takes for this reflation thesis to take place, the more likely the S&P, I think, catches down to everything. But again, I go back to central banks have taught us one thing, which is that they are very creative. And I think they will do whatever it takes, a lot vendors, to steepen the yield curve at any cost.

JAKE MERL: Well, Michael, thanks so much for the update. It was great having you back on the show. We'll see how it plays out in the months to come.

JAKE MERL: So Michael is still bullish on the reflation theme and likes betting on emerging markets. He thinks the iShares MSCI Emerging Markets ETF, ticker symbol EEM, should outperform the SPDR S&P 500 ETF, ticker symbol SPY, by 20% over the next three to six months. That was Michael Gayed of Pension Partners. And for Real Vision, I'm Jake Merl.