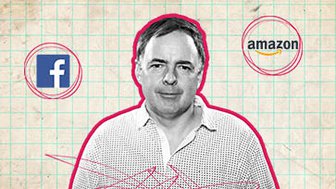 Larry McDonald, founder of the Bear Traps Report, takes a…

Playing for a Tech Wreck

John Jannarone, editor in chief of IPO Edge, explains why shares of Pivotal Acquisition have significant upside potential over the next year. He analyzes the company's acquisition of KLDiscovery, notes how they use technology to gain a competitive edge in data discovery, and reviews how traders can play the current opportunity, in this interview with Jake Merl. Filmed on July 22, 2019.

JAKE MERL: Welcome to Trade Ideas. I'm Jake Merl sitting down with John Jannarone, editor in chief of IPO Edge. John, great to have you back on the show.

JAKE MERL: So let's get right into it, today. What's your trade idea?

JOHN JANNARONE: So my idea today is a special purpose acquisition company, or a SPAC. And it is acquiring a company called KL Discovery. KL Discovery does something that happens all the time, but we probably don't think that much about it. They're basically doing data discovery with their civil lawsuits. That's about 4/5 of the business. So this is a huge, huge thing that is going on, these days.

If you go back to the '90s, there was all this paper, right? But now, the amount of data and all of our different devices, it's just dispersed in so many different places that it takes some real firepower to collect it quickly.

JOHN JANNARONE: Yeah, so what happens when there's a civil lawsuit- and most of this business is in civil lawsuits- one party will get to have discovery of a whole lot of information from the other party. And what used to happen, 25 years ago, is you would just get access a bunch of file cabinets. But the world's changed dramatically. So we're not just talking about email. We're talking social media, what's on my iPhone, iPad, BlackBerry, servers, whatever. And it takes a lot of firepower to collect this stuff quickly.

So law firms and major companies will both hire KL Discovery or one of their competitors to do this. They don't have the capability to do it internally.

JAKE MERL: So overall, it seems like a great opportunity. But why, specifically, do you like this company?

JOHN JANNARONE: Well, I think that these guys are head and shoulders above the competition, in terms of their growth prospects, because they're very, very good at doing acquisitions. So these aren't always game changing acquisitions. Some of them are tuck-ins, but they're adding on all this technology that's built them up. So they're able to offer way more than the other competitors do.

And by the way, this is a SPAC, so there's a merger that's going to happen here with a sponsor. And the sponsor is being run by a guy named John Lettiki, who is basically a legend in rolling up companies. This is what he does, so it's a real match made in heaven, I think.

JOHN JANNARONE: So it's priced, I think, quite fairly. I think that when you do these SPACs, people have started to learn that they need to be priced that they're going to go up. So it's a little bit under an 11 times 2019 EBITDA. And that's considerably less than some of the competitors. So if you look at listed competitors or comps, I should say, SSNC is a good one. It trades about 20% higher than that. So I think there's a real good amount of upside there.

JAKE MERL: And how much upside are you expecting?

JOHN JANNARONE: Well, I don't want to put too high of a target on it, but I think 25% is pretty good. And that could happen fast. I think within a year or so. If people start to see the company knock out a couple of good quarters, I think the stock should rise. It could happen faster. Sometimes, these SPACs, as we've discussed in the past, will start to trade way up, even before the deal's approved, if people are excited enough about it.

JAKE MERL: So are you looking to trade only the specific SPAC or also the warrants, as well?

JOHN JANNARONE: I looked at the warrants, Jake. And in this case, I think I would just go with the common stock. When we looked at some of these others, like Thunder Bridge, that was a really unusual situation, where the warrants were just being ignored. And they were very cheap. But in this case, they're trading about where others do. So there's another one, Leo holdings, which is Chuck E Cheese, which we've talked about. These warrants are trading around the same price.

So if you want the extra juice, sure. But I don't think there's exceptional value there, like there was with Thunder Bridge.

JAKE MERL: And over what time horizon you expect this 25% upside potential?

JOHN JANNARONE: I think within a year. But again, I would not be surprised if it happened faster. I don't know that this is going to rally before the deal gets approved. But my guess is that after the deal gets done, this trades very well. And you can look at some of the other very successful deals recently- one's Spa World, which we may have talked about. That one's up 50% in just six months. So if these things are done right, the returns can be fantastic.

JOHN JANNARONE: I think that the biggest risk here is competition. When I looked at this, I thought, what's the moat? And there are two big competitors. And by the way, one of their competitors was taken out at a higher multiple a couple of years ago, too. That's another reason to think there's upside. But if one of the competitors starts getting very aggressive, maybe they make a smart acquisition. That could be troubling.

But again, I would go back to the fact that we've got a CEO at the company who has a very proven track record, and then the sponsor, John Lettiki, who's also a master at doing roll ups. So I think it's going to be tough to compete with those guys.

JAKE MERL: And in terms of defining your risk, where would you put your stop loss?

JOHN JANNARONE: If I started to see something- again, this would be because of a competitive threat- I wouldn't want to lose more than 20% on this. But remember, this is a SPAC. So if you buy this now, the downside is really $10- the deal doesn't get approved. You get your money back. But in the event that it's approved, and something bad happened, that's where I get scared.

And you know what? All SPACs don't perform great. One, Waitr Holdings, has been a disappointment. So I don't want to be a cheerleader for every SPAC. You've got to pick your battles.

JAKE MERL: Well, John, we'll see how it plays out. Thanks so much for joining us.

JOHN JANNARONE: Thanks a lot, Jake.

JAKE MERL: So John is bullish on pivotal acquisition. Specifically, he likes buying ticker symbol PVT at current levels. He sees downside risk as low as $10 with 25% upside potential over the next year. That was John Jannarone of IPO Edge. And for Real Vision, I'm Jake Merl.