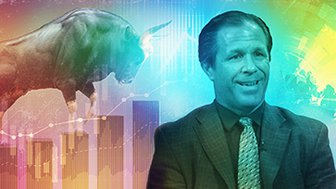 JAKE MERL: Welcome to Trade Ideas. I'm Jake Morel, sitting down with Joe Perry of Forex Analytix. Joe, it's great to have you back on the show.

JOE PERRY: Thanks, Jake, glad to be back.

JAKE MERL: So, let's get right into it today. What's your trade idea?

JOE PERRY: I'm looking at copper right now on a daily chart primarily. And if you look back, going back to 2018, you can see that every time we've put in a high in the RSI, we've sold off. We've done that one, two, three times, going back to then.

And now we're at a high again. The RSI is lower though. Which makes me think there's still room for price to go higher until the RSI gets into that overbought territory, where it's going to roll over and then they'll sell off again. Also, it seems to be gravitating around this $3 level. We've been higher, going back to last year, and then halfway through the chart, you can see that we've been in the lower half.

We're back up to that level right now. We've put in a double bottom. And you can see that as we bounce off that double bottom, there are a couple of different ways you can look at this. We bounced out of it, and we're putting in like a pendant formation. The extension of that goes up to about three and a quarter.l that's where I'm targeting.

Also, you can see that on that pullback, we've pulled back to less than a 0.3 to a retracement level. That's a very small pullback, which is another reason that makes me think we're going to go higher. And we also have ascending triangle formation right here. So I'm looking to get in this trade right around the market level here at about 290, and I'm looking for three and a quarter on the upside.

JAKE MERL: So Joe, in addition to all the things you just laid out, are there any other technicals you're watching out there that's confirming your thesis?

JOE PERRY: Well, you can also look at it from a harmonics perspective. If you go back and you look at the low earlier in the year, you can see that we're trading in A, B, equals C, D pattern. So it's kind of like you take the A, B, and you extend it higher from the bottom of the C. And you kind of get a target up around that same three and a quarter level.

Also with the harmonics, if we do continue higher, up to that level around three and a quarter, or 320, that I was looking at, that would be a bat pattern, which is where you would typically look to be getting short. And that would coincide with around those previous highs.

JAKE MERL: So, in addition to the technicals you just laid out, is there anything else out there that you're looking at that you think is important for this trade?

JOE PERRY: Well, I'm looking at the Australian dollar, and that correlates very high with copper. The dollar itself has been very low volatility lately, in the dollar. It's been at about a five year low. So anything that has to deal with the dollar, if you look at it, it's been in a really tight range. The dollar itself actually has been trading between 95 and 98. The euro's been trading between 112 and 116. There hasn't been much to do there.

Now, finally, seeing something here with the Aussie. It looks like it's starting to break out of a triangle. It's right at the 200 day moving average. So the Aussie looks like it could be moving higher out of that triangle, up towards 74. And if that does happen, it looks like copper should move with it, as they're correlated.

JAKE MERL: And so I know copper is kind of a touchy subject for most traders. Are you looking at positioning, inventories, other data points, anything like that? Or is this purely just based on the technicals?

JOE PERRY: It is based on the technicals. I am looking at China, obviously, because China and copper and Australia are so correlated. And the data, lately, that's been coming out from China, if you look back at that trade balance, was through the roof. Retail sales just the other day beat industrial production, which is huge for copper. They were expecting 5.9. And it came out at eight and a half, which is ridiculous.

So you see these numbers coming out much stronger. They also said that they're going to provide new stimulus to help boost consumption. So if all of these actually are true, then copper should rise with China and also bring Aussie higher as well.

JAKE MERL: So given all this information, what would you say is the biggest risk to this trade?

JOE PERRY: The biggest risk is that China doesn't come through. And China's kind of has-- you know, people have been talking about these green shoots coming up, and this is it in the data. If this data rolls over, things next month turn out to be worse, the demand won't be there as expected right now, and then copper will probably roll over as well.

JAKE MERL: Joe, can you please break down this trade in 30 seconds?

JOE PERRY: Thanks, Jake, it was great.

JAKE MERL: So Joe is bullish on copper. Specifically, he suggests going long at 290 with a stop loss at 280 and a target price of 325 over the next three months. That was Joe Perry of Forex Analytix. And for Real Vision, I'm Jake Merl.