S&P 500: Something is Ridiculously Wrong 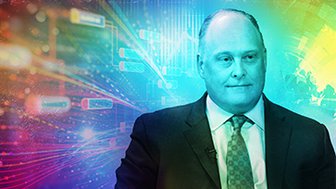 S&P 500: Something is Ridiculously Wrong

Michael Gayed, portfolio manager at Pension Partners and author of The Lead-Lag Report, returns to Real Vision to update his bearish thesis on the stock market. He highlights the importance of lumber as a key indicator, notes just how low he sees the S&P 500 going, and considers risks to his thesis, in this interview with Jake Merl. Filmed on April 23, 2019.

JAKE MERL: Welcome to Trade Ideas. I'm Jake Merl sitting down Michael Gayed, portfolio manager at Pension Partners, and author of The Lead-Lag Report, Michael, it's great to have you back on the show.

MICHAEL GAYED: I appreciate the invite.

JAKE MERL: So you were last year about a month ago bearish on the stock market. And as we've seen, the market has continued to drift higher since your last interview. So give us an update. Where are we now? Have you changed your mind? Or do you think the market is still due for a sell off?

MICHAEL GAYED: I'll make the case to your audience that I think something is ridiculously wrong here in the way markets are behaving. I know everyone's excited looking at the S&P being pretty much back at all time highs, and NASDAQ. But not everything has really V'd in the same way that US large caps and tech in particular has. When you look at small caps, small caps are nowhere near their all time high from last year. You look at lumber, which we'll talk about, it's actually turned the wrong direction. Lumber, which is a key, key indicator of strength in US markets and risk on sentiment.

And you've got I think a lot of just other divergences that are happening. One of things I said last time was that I thought that a W was more likely than not. I still think that's very much at play. Meaning that, when you look at the way markets have come off of the lows in December, I still think there's a very real chance you could revisit those lows, maybe break them. And I don't think that that should really surprised anybody when you look at the overall weakness in other more riskier segments of the market, which have not participated to the same extent as the S&P.

JAKE MERL: So what are the specific signals that you're seeing that's flashing red right now?

MICHAEL GAYED: So there are a few things I think happening here, right. So the most notable one by far and away is lumber. So I'm actually going to be at the NAAIM Conference this weekend, invited to be a speaker. I co-authored a paper that won the Founder's award for NAAIM that spoke about lumber. And in that paper, the finding is very simple. When lumber is weak generally, over a rolling three month period, what you tend to see is broader stock market weakness with a lag afterwards.

There should be some logic there right in the sense that lumber is a key component to housing. Average house has about 14,000 board feet of lumber. If lumber is doing well, it means that consumer wealth is likely to increase, because it's anticipating some kind of pickup in housing. As much as we live in the world of the stock market, the average person lives in the world of their house, and that's where most of their wealth comes from.

When you look at lumber, especially in the last four to six weeks, it's turned lower. It's actually looking like it wants to revisit the lows from last year. Lumber peaked out around June, July of last year before those massive declines started. And historically, when you look at lumber, lumber weakness has preceded the 1987 crash, the 1990 recession, LTCM, the tech wreck, the summer crash of 2011, as well as Lehman itself. If you look at how lumber relative to gold behaved, it actually turned lower two weeks before Lehman occurred.

So a lot of these kind of big market stress periods have been preceded by weakness in lumber. You're seeing that here. So the question for everybody is, what should be leading. Should the S&P be the leading indicator, or should it be lumber, which is the key to housing, which is the key to consumer wealth.

JAKE MERL: So in addition to lumber, are you looking at and the other sectors of the market?

MICHAEL GAYED: And I've mentioned this before. The other sort of more interesting aspect to this rally is that you have not had commensurate weakness in bonds. You have not seen inflation expectations pick up, despite the Fed saying we're going to hold off on raising rates. And if a lot of this move has been driven by the Fed changing its stance, but the bond market doesn't believe it, then somebody is clearly off I think, in that narrative.

When you have these kind of changes in market dynamics, and these kind of disconnects internally, you end up seeing some interesting future behavior.

JAKE MERL: Give an example.

MICHAEL GAYED: Everyone's so focused on health care. Health care as a sector has gotten absolutely destroyed relative to the market, whereas tech has been the star. Now health care, I can argue to you, is very much a defensive sector. Why? Because it tends to be more dividend oriented. Anything it's dividend oriented tends to be more defensive in periods of market stress. Tech is not as dividend oriented, obviously. So if I'm right, you're going to have this W formation. The people who are bottom fishing for health care may actually end up being right, positioning in health care, but not as an offensive way to make money, but as a defensive play for decline in equities. Whereas tech itself might start to turn lower.

So I think that's sort of an interesting thing. Utilities, also, I've mentioned that before, continue to hold on relatively well. I'll tell you that in terms of our own indicators, and I've been writing about this fairly regularly as of late, I think there is a real chance of a spring crash in stocks. And I'm not saying that to be hyperbolic, and I'm not saying that for any other reason but just the way markets are behaving in these kind of divergences that I'm seeing.

And given the way that utilities and treasuries are starting to kind of firm up just a bit here. If it's going to happen, I think you're talking the next two, three weeks. There's a real chance of the storm coming. Whether the actual accident happens, a crash remains to be seen, obviously. But the conditions are certain to favorite risk off period.

JAKE MERL: So crash is a pretty strong word. How much downside you actually see for the S&P?

MICHAEL GAYED: Yeah, so crash is an interesting term. And I know people get hung up on what a crash means. So to me, a crash is simply defined as not just the magnitude of the decline, but how fast it happens, right? A correction that happens over a four day period is not a correction, it's a crash. It's just a matter of time.

So given the way the markets have behaved in the last several years, where you really haven't had a traditional correction that lasts for more than two weeks, you have these kind of very contracted periods, and an immediate Vs, I don't think it should be that unusual to expect that if markets turn down, they turn down very, very quickly and very aggressively. And just given the amount of I would argue, hubris that's now taking place following the December lows, markets are very at good surprising people. So I think it could very easily surprise people in terms of how quickly it happens.

And listen, I get it, right? The negative narrative always sounds smarter. You always sound more intellectual when you talk negative about markets, because you point out something which arguably nobody else can really argue against, right? But it may not necessarily translate into trading profits. But just again, when I look at the way lumber is behaving, the way I look sort of the sentiment, and I look at these lack of real risk on segments that are not participating in the move, I go back to what I said before-- I think something's ridiculously wrong.

JAKE MERL: So how much downside you actually see over the next two to three weeks?

JAKE MERL: And so Michael, would you have a stop loss for this trade? Where would you get out if the market continues to march higher?

MICHAEL GAYED: If in some strange way the S&P is leading everything else higher, which is a little bit unusual, because you would not expect large caps to be the thing that drags everything up. I think if you start to see small caps try to resume and push towards the highs rather than a specific level, that kind of trend becomes the issue.

When you look at small caps in the last, let's call it six to eight weeks, they've kind of petered out here. They've really kind of just gone sideways while the S&P kept on going higher. If small caps were to break through, combined with utilities weakening, that would be sort of my way of countering sort of the W. And then, yeah, it's risk on, continuous until probably next year's election.

JAKE MERL: So you would say that would be the biggest risk to the trade?

MICHAEL GAYED: Oh, for sure, yeah. For sure. I mean, the biggest risk is that the S&P is not the laggard, it's the leader. It's leading the markets higher rather than sort of the last stage of the bull run.

JAKE MERL: So since last time you were here, has anything changed at all? Or is this the same bearish thesis?

MICHAEL GAYED: If you recall one of things I said last time was what would make me more bullish is if oil were to rally. Now that's happened, right? You've seen oil come back quite a bit. The problem is nothing seems to believe the oil moved. In other words, when you look at the energy sector and stock market side, energy has lagged the S&P. In other words, as oil prices themselves going up, you've not seen energy take a leadership on the stock side. A little bit unusual from that perspective.

And inflation expectations haven't really meaningfully picked up, which you would expect to see if oil is, rising because of cost push inflationary pressure causing sort of a change in sentiment towards reflation. So if anything, I've actually become more negative.

Now you can say well that's doubling down because the S&P is pushing towards new highs, and you know, you're at a loss from that perspective. That's right. I always tell people is a fine line between being wrong and being early in markets. Arguably, the people who call for the housing crisis-- housing peaked in '06. You didn't have Lehman until '08. They were ultimately right, but they were just early by the year and a half, two years.

JAKE MERL: Michael, that was great. Thanks so much for joining us.

MICHAEL GAYED: Thank you, appreciate it.

JAKE MERL: So Michael's bearish on the stock market. Specifically he thinks the S&P 500 could retest its recent December lows over the next month. That was Michael Gayed of Pension Partners. And for Real Vision, I'm Jake Merl.