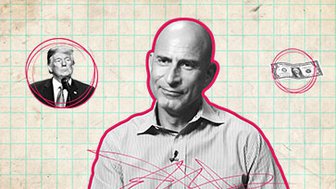 Maj Soueidan, co-founder of GeoInvesting, joins Real Vision to break down the current environment for microcaps. In this interview with Jake Merl, Soueidan discusses how the industry has changed since the 2008 financial crisis, and reviews how investors can take advantage of potential inefficiencies within the sector. Filmed on August 26, 2019.

JAKE MERL: Welcome to Trade Ideas. I'm Jake Merl, sitting down with Maj Soueidan, co-founder of GeoInvesting. Maj, it's great to have you on the show for your very first Real Vision interview.

MAJ SOUEIDAN: Thanks, Jake. I really appreciate the time you take to have me here today. Really look forward to talking about micro-caps today. And the advantage of investing in them from my perspective, and how our company GeoInvesting had been playing a part trying to bring awareness to this space.

JAKE MERL: Based on my knowledge of micro-caps, they seem to have a pretty bad reputation. For example, they're pretty illiquid, and people refer to them as penny stocks. There's a lot of pump and dump schemes, there's a lot of fraud. So Maj, do you think any of those concerns are valid?

MAJ SOUEIDAN: They're extremely valid. Let me point out, they're valid at any market cap, and run, you can have big caps, small caps, micro caps, nano caps, you can have fraud at any type of level of playing field net universe. So it's really important just to do your homework and understand whatever you're investing in. But because of the stereotypes that financial media places on this space, it creates a lot opportunity to find great companies, and we'll talk about that later. But you'll be surprised at some of these incredibly revenue generating companies and profit companies are trading at the OTC their micro caps. And it's not the size of the micro-cap in terms of revenue. So if you're willing to look a little deeper and do little homework, you can find some incredible value in that area.

MAJ SOUEIDAN: Let me say that I don't think they're overblown. They're definitely there. But what's overblown is a misconception that there aren't good quality companies in this space. So I think that's really important to understand that. Looking in places where other people aren't looking or competing, just as this makes logic sense to be looking for these ideas. And the regulatory environment has changed so much since 2008 crisis that it's making it harder for a lot of retail investors, institutional investors to invest in this space.

JAKE MERL: And why is that?

MAJ SOUEIDAN: Well, look, it's interesting. Since the recession, you would think that people are more risk averse. They want to take less risk. Well, what has happened actually, is there's been more of appetite for risk, in my opinion. And it's really affected the way that the micro-cap universe has evolved over time. People are adverse to holding stocks long-term anymore, that combined with a growth in ETFs index funds, longer term, people are investing in index funds. Because of the 2008 global recession, this is all at the back of our heads. And the second there's a volatile moment in the market and we all get scared and people sell panic. Everyone's thinking shorter term.

So what ends up happening is a lot of investors start craving pump and dumps, bout text, the sexy stories that promise you short term returns, cannabis watching, so it's counterintuitive. So what happens is these stocks are getting a lot more momentum. And there's only so much money to go around in the market. So when you're talking about the micro-cap universe, a lot of these what I call tier one market companies, really valuable companies, revenue profitable, but they're not sexy maybe. They're not putting out sensational press releases, they get ignored.

So basically, investor psychology has caused a lot of the shift. 2008 also basically eradicated a lot of the retail investors. Retail investors used to be the first type of the front line to find in these companies. The projects were like this back in the day, you'd have the retail investors come in and buy the stocks, create enough volume for the stocks to go up, then institutional investors will come in and buy these stocks and then take it to their level. We just create this nice liquidity. And it worked really well.

But everything's broken out, there's less retail investors buying these stocks, institutional investors have this regulatory environment that's making it less possible to buy these stocks. So yes, just the whole supply/demand environment has changed over time. So it takes a lot longer for these companies to be recognized. That's the environment, and then you have a lot more ice, I mean, you have a lot of different fraud now. You have pump and dump frauds, more sophisticated, not just in the OTC anymore, you had the China fraud that we were pretty big an outing between 2000, I think 9 and '14, we're still doing it now.

So the whole environment's changed, and you have short-selling sites like Seeking Alpha. So we're all on just natural on edge all the time. And that's changed a lot of the environment. I think that the shorter term nature of this market has really made it tough for investors to want to be in these illiquid names that mean it don't react right away, or it may take some time. To mess opportunity, though, if you're willing, although it takes longer time maybe to realize values in these companies, it's taught me as an investor, because it's like, wow, investing in longer term is incredible.

I've always been an opportunistic investor. I was able to find lots of great gains 6 months to a year under these names, years ago. Now it takes longer. But it's forcing you to actually do better research, dig deeper, and hold these things for multi-bagger returns over time.

JAKE MERL: So basically, you're saying that the micro-cap market right now is inefficient. There's a lot of illiquidity. And there's a discrepancy between these high flying cannabis names and blockchain names versus these tier one names with value. Is that basically what you're saying?

MAJ SOUEIDAN: Yeah, it is. And actually, I feel that although the market in general is more efficient as we've moved on, I believe it's more inefficient than ever in the micro-cap universe. And what great place- who thought that would ever happen? What better position to be in? It'll be hunting and growing this. So you have less people looking for the opportunities, you have less people allowed to look for opportunities, brokerage firms making it harder for retail investors to buy these companies. So it's as great if you're willing to look there and have a time horizon more than one minute.

The average holding period for a retail investor, or investors in general really, has slowly gone from 6 years to 6 months. That was as of maybe three years ago, it's probably less now. So that just really tells you the state of the space and what's going on.

JAKE MERL: Maj. Well, thanks so much for shedding some light on micro-caps. It was great having you on the show. Thanks so much.

MAJ SOUEIDAN: Thank you, Jake and I look forward to being here again.