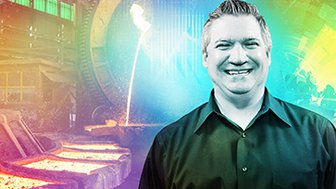 Joe Perry, CMT, of ForexAnalytix, argues that copper is primed…

Craig Johnson, CMT, technical market strategist at Piper Jaffray, discusses the utility of long-term charts and data in making market decisions. Although he grants that passive investing and electronic trading have changed the time frame and face of the market, he stills sees value in the technical indicators and correlations that can be drawn from decades-old data. He breaks down some of the indicators he loves and the places he has used them recently, in this interview with Jake Merl. Filmed on April 4, 2019 at the 46th annual CMT Symposium in New York.

CRAIG JOHNSON: Thanks, Jake. Thanks for having me.

JAKE MERL: So today, we're going to be talking about a little evergreen topic, rather than a trade idea. But before we do so, can you please go over your background, who you are, and what you do at Piper Jaffray?

CRAIG JOHNSON: So I started at Piper Jaffray back in 1995. Before that, I was at Drake University-- did my undergraduate graduate degrees there. I finished the CFA program and also the CMT. I've also been the president of the CMT association for over four years-- just stepped down.

So that was a nice bit of service for that and still on the board of directors for nine years now. So we've been doing this for 24 years now. And just every day we're having a lot of fun.

JAKE MERL: And so with that in mind, today we're going to be talking about the topic of time horizons within charts. There's been a lot of talk among investors and traders-- which time frames are best, which charts to use? And I'm just curious. And I wanted to ask you, are long-term charts still relevant in today's markets?

CRAIG JOHNSON: Jake, I think the answer to that is absolutely yes. And at Piper Jaffray, we've had this kind of longstanding project we call the MicroGroup Project. And we have been pulling in company data-- price data for every single stock above a $25 million market cap at a $2 price, going all the way back to the late 1960s, in some cases, the 1950s.

So we have this great really rich database of pricing information you're not going to find, really, anywhere else on Wall Street. We've taken all that data. And we have created long-term charts. And these charts will go back, again, to the late 60s and sometimes earlier.

We'll do it on companies. We'll do it on industry groups and also sectors. And I think these charts are still relevant. The reason being is a lot of things are changing in this market. And it to me it feels like the shorter-term side of this has been fairly well-exploited.

When you're starting to put up MicroCell towers and microwave towers, you go from New York to Chicago. And you're fighting about five to six milliseconds. I'm not sure that anybody else is competing in that kind of time frame.

But stepping back, looking at what is disruptive technology, looking at these longer-term trends, looking at the relative performance of those trends compared to the rest of the market, you can start to identify trends and themes that are investable, and investable for time periods that will match up with long only accounts and hedge fund accounts. They can't own stocks for one to two days in any sort of big size due to liquidity.

So you need to look at the primary and longer-term trends, and where the relative outperformance is coming from. Because, as you know as well as I do, only two things that a manager cares about is the absolute trend and the relative performance, because you're always compared against the benchmark. And that's what we try to hone into with our long-term charts.

JAKE MERL: So how exactly do you use these charts or apply them at Piper Jaffray?

CRAIG JOHNSON: So if we go back, and we look at our financial chart that we've got, we create them, actually, on a weighted basis, so a market cap-weighted, and also on an unweighted basis. It was very interesting to us back in 2007-- we started seeing a divergence happening.

The market continued to move higher. But the financial sector started to roll over and was diverging from the rest of the market. And when we go back, and we look at those long-term charts and look at periods where there's been this divergence between the market and the financial sector, we have found that it's been a fairly difficult period shortly after that divergence starts to occur.

But the divergence actually started in 2006. And it just got bigger and bigger. But you knew something was wrong. And you could start to see that divergence getting wider and the relative performance getting weaker. So that's one way that we have used these long-term charts in the past.

JAKE MERL: So would you say those indicators are the most helpful in helping you determine the underlying trend or strength of the market?

It really worked well in 2018. And then also, another indicator we look at, again, keeping it simple principle is we look at how many of our industry groups and stocks are above a 40-week or 200-day moving average. And Jake, everything we do is on a weekly basis.

Again, the portfolio managers and hedge fund managers that we're working with-- they are not try to necessarily day trade this market. They need to own these things for weeks, months, quarters, and sometimes longer.

And as long as the trend is there, as you saw Tom O'Halleran say here at the CMT Symposium, they want to own these things until the trends ultimately change. And they're willing to ride these things, and if it's just a correction back in price.

But coming back to our 40 week, Jake, we found really interesting back in September, mid-September of last year-- this market was pressing ahead being the S&P. And we started seeing that the internals-- a number of groups above their 40-week moving average-- was actually starting to deteriorate.

It gave us on our work what we define as a sell signal on September 16. We then watch this market decline all the way through Q4. And then you ultimately made a bottom when you had less than 10% of all of our stocks and groups above their 40-week moving average.

And from going back and looking at history, we know that that is typically a period where you want to step up and buy stocks. And when we got down to 4%, we actually put a buy recommendation out. So the timing worked really, really well.

And we've known from going back to, again, to history, which we think is our advantage. I think we've got a better understanding of history with our rich database that we've got of all this price action and all these stocks that you typically don't make a double bottom low.

You typically go from a very low digit single-digit type reading. And almost every single time since the 1960s, you go from a sub 5% of your groups above the 40 week to 70% to 80% before the cycle ultimately runs out, and you're ultimately done.

So it never really has historically argued for a double bottom low. And we've been arguing that you weren't going to get that. There's been only three times that this indicator's ever gone to zero. That was back in the financial crisis in 2007, '08, and '09.

That was also in the '87 market crash and then back in '73, '74. So we knew at that point in time that this market was losing strength, losing momentum. And the number of stocks that were continuing to push this tape up was continuing to narrow. That was the FANG stocks back then.

And we knew that 80% of the market performance was being driven by the FANG stocks. Historically, those have been the generals. And when the generals are the last ones standing on the field, you usually end up with some sort of pullback or correction. And this indicator done a nice job showing us that.

So when we got to very low single-digit readings of that indicator, I like to call around to portfolio managers and other folks that have been in the industry. And I ask him a very simple question. Is this the financial crisis in the making? Is this '87? Is this '73, '74? And you started looking at all those specific scenarios in history.

And the answer is, no. We don't have spiking oil prices in 2018. No, we don't have a problem in the financial system. It's been reregulated, and the debt levels aren't as high. No, this isn't portfolio insurance. And then my answer to them is, then, I don't know why you're not buying this market. And when you got down to those single-digit readings, that was a time to buy the market.

And this indicator did a very good job of helping us see that and put it into perspective and strip away the emotion where a lot of people were calling for much deeper pullback in the market. We knew that a lot of it was already baked in. And it was time to buy stocks. And it's been a great entry point.

JAKE MERL: So Craig, we all know that history doesn't repeat, but it does rhyme. And so bring that to today's markets, is history still relevant, given the rise of ETFs and passive investing and electronic trading?

CRAIG JOHNSON: I think if we don't come back-- and I completely agree with that statement. It may not exactly repeat, but it definitely rhymes. And when I go back, and I look at history and use it as a guide, take, for instance, the presidential cycles.

And now, they're behind their benchmarks from a relative perspective. But what's interesting-- past the 4th of July, ballparkish, from July to January-- the market is historically declines. And it is a little bit weaker. So while you played offense in the first half, you probably going to be making your alpha on the second half by being underinvested or lowering your beta relative to the market.

And so that's why I think history is going to repeat itself. And again, I think we're all victims if we don't ultimately come back and look at it and learn from history because things do repeat. I'd also just say that one thing that has never changed over the years that I like to say is, fear and greed has never changed, despite the rise of the ETFs, despite the rise of algos.

But fear and greed has never changed. And that's why I still continue to believe that technical analysis and the use of these long-term charts makes 100% sense. And it's very helpful to all these portfolio managers.

JAKE MERL: Craig, that was great. Thanks so much for joining us.

JAKE MERL: That was Craig Johnson of Piper Jaffray. And for Real Vision, I'm Jake Merl.