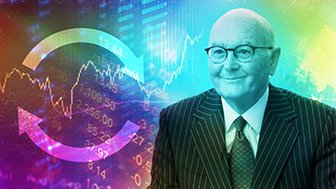 Trevor Neil of Beta Group discusses how he uses relative…

Christian Fromhertz, founder and CEO of the Tribeca Trade Group, remains bullish on the stock market despite this week's volatile price action. In this interview with Jake Merl, he notes the trade war negotiations and highlights two stocks to look at in order to take advantage of the opportunity: CME Group and Home Depot. Filmed on May 7, 2019.

JAKE MERL: Welcome to Trade Ideas. I'm Jake Merl, sitting down with Christian Fromhertz, founder and CEO of the Tribeca Trade Group. Christian, great to have you back on the show.

JAKE MERL: So, what's your take on the market right now? We're currently trading a couple percent below all-time highs. We saw a big move down over the weekend into the open on Monday, stocks then reversed and powered higher. And now we've sold off again. So, what do you think, Christian? Are you bullish or bearish here?

CHRISTIAN FROMHERTZ: Yeah. And I think that we've kind of moved back into a little bit of a headline driven market, something that we haven't really had to deal with in a couple months. But here we are again. So, I think right now, there's a lot of good things to be bullish about this market. But we've really come to a place very quickly, right? And really, without any digestion. So, now that we're getting a little bit headlines, I think it makes sense for us to digest some of those gains. I think it could have been anything that would cause us being that we would have moved up so fast, any negative news would have brought us into some consolidation. So, I think this is a good place to be. As long as we hold support, I'm still very bullish for the year.

JAKE MERL: So, how do you suggest playing the current market environment?

CHRISTIAN FROMHERTZ: Yeah, what's nice is that there's always different trades and different groups that we can add on for this type of market. One of the trades that I like right now is the CME. I think this is a great way to express maybe a little bit of short-term volatility. If you look at the chart, the weekly chart I like specifically, it's been digesting over the first part of the year. And it just reported earnings. They also just recently come up with a new product, which really caters to the retail investors, which is the micro minis, which allows retail traders to get a little bit more comfortable with trading futures.

So, I think this really makes the pie bigger for them in terms of their product scope. And if you look at the technicals, which I really like right now, as long as it closes above $178 this week, we're showing that it's breaking a downtrend line and can move back to that uptrend and possibly back to 52-week highs.

One of the things that I rely on is value areas, and I'm looking at basically last year's volume at price. And I think $178 is really a key area with that down- not only with a downtrend line, but also looking at coming into really nice to find support. So, as long as it holds $178, I think it could go ahead and retrace some of the levels that it got below this year and possibly break back to new highs.

I think it's a great play on volatility. And they've got a couple catalysts working for them. And also, you're not buying something right at 52-week highs, you're buying something that has been digesting for the last three or four months. And it's now just starting to look attractive again.

JAKE MERL: So, what key levels are you looking at?

CHRISTIAN FROMHERTZ: So, again, I think that $178 levels is a perfect line. And again, that would be at the end of the week, because I'm looking at the weekly charts, so longer-term chart. And then also, it just reported earnings. So, you don't have to worry about any stock specific events.

JAKE MERL: Do you have a target price on the upside? And what, do you have a stop loss on the downside?

CHRISTIAN FROMHERTZ: I would say use the stop- always talk about the stop price first, so below, I would say $177 would be your stop price, and maybe taking half off at the 52-week highs and then letting the rest go further up.

CHRISTIAN FROMHERTZ: I would say if it just happens to break back into below support. So, this way, it's a very technical trade.

JAKE MERL: And so, let's say we don't get a trade deal by Friday, are there any other stocks you'd be looking to purchase?

CHRISTIAN FROMHERTZ: Yeah, I think what's always interesting is when market volatility creeps up, it seems like everything gets sold off. And it really if you're a single stock trader and open to putting on a little bit of alpha, you could start to look what names considering everything goes down, there's some really good buying opportunities. If the trade deal by chance does not happen on Friday, which looks like it's getting to be more of a distant probability or possibility, then I think some names that have their business more focused domestically can really outperform in that type of market.

One of the names that I like as well as Home Depot. I'm sticking with the weekly chart. I think Home Depot has sold off a little bit and can really- if it holds in here, you're looking at a possible cup and handle pattern. So, as long as that holds $197, I like that trade.

JAKE MERL: And do you have a target price for that?

CHRISTIAN FROMHERTZ: I think in the short- term, $210. It does have earnings in a couple weeks. So, if it happens to rally back up to around that level, I think that would be a great place to take some profits off before they report earnings.

JAKE MERL: And what about a stop loss just in case things don't go your way?

JAKE MERL: Well, Christian, that was great. Thanks so much for joining us.

CHRISTIAN FROMHERTZ: Thanks for having me.

That was Christian Fromhertz of the Tribeca Trade Group. And for Real Vision, I'm Jake Merl.