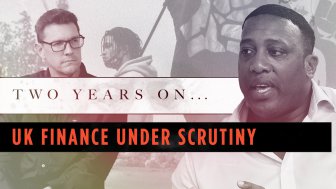 In May 2020 the world was shocked by the tragic…

In the last episode of this series we discussed how the murder of George Floyd in May of 2020, and the subsequent protests, brought about a call for change around the world. Individuals, businesses, industries and institutions were forced to acknowledge the existence of inequality, discrimination, and lack of representation for ethnic minorities not just within society, but within the professional work space as well. The UK finance sector came under great scrutiny as data showed how ethnic minorities were vastly underrepresented within the sector, and nearly two thirds of UK finance workers from ethnic minority backgrounds experienced discrimination within the workplace. But 2 years later, how much progress have we made? In this three-part special series, Real Vision’s Roger Hirst is joined by Michael Barrington Hibbert, on the two year anniversary of George Floyd’s murder, to discuss why the UK finance industry came under such scrutiny, what progress has been made, and the next steps.

ROGER HIRST: In the last episode of this series, we discussed how the murder of George Floyd in May of 2020, and the subsequent protests brought about a call for change around the world. Individuals, businesses, industries and institutions were forced to acknowledge the existence of inequality, discrimination, and a lack of representation for ethnic minorities, not just within society, but within the professional workspace as well.

The UK finance sector came under great scrutiny, as data showed how ethnic minorities were vastly underrepresented within this sector. And nearly two thirds of UK finance workers from black and ethnic minority backgrounds experienced discrimination within the workplace. But two years later, how much progress have we made? Joining me again, is Michael Barrington-Hibbert.

MICHAEL BARRINGTON-HIBBERT: I tend to preface most discussions about diversity, with something along the lines of we still have a lot of work to do. So, rather than being on a downer, this is to serve as a reminder that we've still make improvements. And we are still very much in the early stages of this journey. I mentioned in the first discussion is around, if we look at it from a diet standpoint, you're not going to sign up and do a marathon if you've not exercise for 15, 20 years. It's about taking small, incremental steps.

And what I'm delighted to have seen over the last two years is around organizations having conversations. Remember, Roger, race and black is still a taboo in the United Kingdom. Our cousin's in the US may be a little bit more advanced around talking about this narrative, but it's definitely that first step. If we look at around access, we've seen a number of executive search firms who hold the keys to the boardroom, really engaging with underrepresented groups.

Some of the biggest search firms are investing in, not just hiring diverse talent within their organizations, but looking to develop programs, non-exec director programs, board level programs in order to help facilitate their clients to be able to get access. That's one first step which has definitely happened over the last two years. Again, it's important about context, there's still a lot of work to do within this space. But the fact that organizations who have access to these groups are starting to do more, and lean in is a fundamental first step. And I believe it will start to get better as we look to progress things moving forward.

MICHAEL BARRINGTON-HIBBERT: Absolutely. Look, John Parker review, set a target that each FTSE 100 board should have at least one director from a minority ethnic group by the end of 2021. Now, I was very fortunate to be invited to Downing Street two weeks ago with the Office of [?] Review, to talk about the progress. And what was so empowerful for me Roger, was one we had leaders of industry at that event. We had CEOs of FTSE 100 companies there. We had CEOs of executive search companies there. And we also had a plethora of talented ethnic minorities in the room talking about progress.

I'm really proud that 89 of the FTSE 100 companies have signed up and actually delivered on this pledge. And let's be very, very clear. This has been self-governed by the organizations. I'm not a fan of Targets. I'm not a fan of [?]. It's about behaviors. At the moment, at the board level, we're making the right steps, but more needs to be done. But I'm hoping for the example that has been set by the board in appointing non-exec directors that this cascades through organizations in order to drive things forward.

ROGER HIRST: It's great. You talked about the board level then. The boardroom is very, very visible. That's ticking the boxes in some way. It's great. Obviously, it's progress. But the vast majority of people work in the rest of the organization, are we seeing the same sort of progress across all organizations, the whole workforce?

MICHAEL BARRINGTON-HIBBERT: Context is really important. Again, if we contextualize this, from a US Bank standpoint, they have a competitive advantage over some of the European houses because of pipeline. If an organization has invested in their pipeline being diverse for 20 to 30 years you then have role models. You then become an attraction for organizations and for candidates to come to your firms.

But what we're not seeing Roger, at this present juncture, is it coming across at the lateral level. What we have seen in the last two years, is that the development of 10,000 Black Interns, which I'm the co-founder of, so when we set up this initiative back in 2020, the objective was to actually just find 100 interns to go into these types of roles, paid internships. We were absolutely overwhelmed by the support of the city.

100 interns turned into 10,000 Black Interns, simply because the asset management community, the financial services industry, across the United Kingdom, wanted to get their arms around this, wanted to give opportunities for underrepresented groups to thrive. I'm delighted to be in a position where that this opportunity has grown across 24 different industry verticals over the last 12 months, Roger. We've got firms like Google, Facebook, Rolls-Royce, all invested in developing pipeline to make the UK economy the driver moving forward.

ROGER HIRST: And on that front, I guess, can you talk about the conversations that are taking place at the boardroom level? And that's probably trickling down to across these border organizations. But how did you get the awareness into actually the social fabric of the UK because a lot of the impediments will be people just don't realize that there are the opportunities, because there had been barriers for so long, that had been put up against a lot of ethnic minorities, even viewing places like the city being a place for them. How'd you get into sort of go grassroots environment? Because you might be advertising jobs, but people might be out there thinking, I'm never going to get the right question.

MICHAEL BARRINGTON-HIBBERT: Really fantastic question. Again, that's the driver with 10,000 Black Interns, because hiring is not just a solution, Roger. It's around access. It's around opportunities. It's around actually being coached and developed by people that have had similar experiences to you. So again, another initiative that we've seen is a social economic diversity task force, which was launched by the Lord Mayor Vincent Keaveny.

There are other fantastic initiatives which have developed over the last two years. There's a non-exec director program called eBook, which works with executive search firms to increase their pipeline of ethnic minority candidates. Again, there has been progress. The question is, is it enough? And if you look at the context of the FTSE 100 boards, and 89% of the CEOs have come from a private school education.

And you look at the context that only 9% of the UK population go to private schools. There's a real inequality there. At the moment, it's been galvanized by a number of groups talking around social mobility. This is not just a black issue. This isn't just about low income individuals. It's about driving equality for all and given access to all.

MICHAEL BARRINGTON-HIBBERT: Again, I keep referencing to small steps, it's a marathon, not a sprint. I think that the intentions are there. And if you look at some organizations, they've gone big, they've gone big on some initiatives. If you're the head of trading, and you're approached by your HR team and said, we're going to do a market map, and you're going to have to pay x to this firm to give you the talent, and they don't deliver, what's going to happen?

They had traders who have a bad experience and say, no, I'm not going to do this anymore. As a consequence, we recommend organizations is to start out small, build momentum. It's around cultural change. It's evolution, not revolution. But important point I do want to add, Roger, is that over the last two years, minority owned businesses which support financial services have thrived. My organization has thrived. City Hive who have launched a mentoring program because you talked about access, you talked about giving people opportunities.

City Hive was set up a cross company mentoring program targeting women of ethnic minority backgrounds, to give them opportunities in terms of representation, access and opportunities. But this takes time. And as I said before, I think the intention is there. We need to be able to create a culture where making mistakes is not galvanized by people losing their jobs. It's about learning from those mistakes and doubling down in the efforts of driving out inequalities within financial services.

ROGER HIRST: The last couple of years, we've almost from a standing start, progress is being made. But what about the future? What about the actions?

MICHAEL BARRINGTON-HIBBERT: Look, the progress we have seen is hugely encouraging. I believe organizations have been part [?], and a real sign that we're moving in the right direction, but there's still a long way to go.