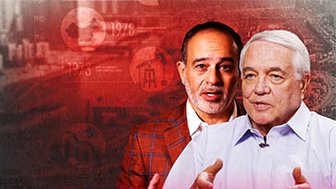 Whitney Tilson, founder and CEO of Empire Financial Research, talks to Ed Harrison about how a few big risks he took early in his career allowed him to grow his fledgling hedge fund. Heeding the advice of Warren Buffet provided him the perspective to identify the opportunities in non-consensus equities through the dotcom bubble. Tilson shares why that perspective helped develop his investment process. This clip is excerpted from a video published on Real Vision on September 13, 2019 entitled "The Endless Hunt for Value."

WHITNEY TILSON: One of the things I tell young people who are trying to bootstrap a fund like I was is, you have to look for a couple opportunities to take some risk to deliver some outsized returns, because otherwise, you're going to be stuck in the small fund trap.

Well, I split it into two periods. The first dozen years or so, I really did knock the cover off the ball. It was a great time for investing. To some extent, I was smart and lucky but a lot of hustle led to the luck. What's the old saying? The harder I work, the luckier I get.

As an example, only a year after I started, we're now in the spring of 2000. A year after I launched, I was up to about $4 million. I heard that investing legend Joel Greenblatt, who I'd read his book, You Can Be a Stock Market Genius. Again, one of those classic early value investing books, that he was teaching a class up at Columbia Business School.

I found out when the first class was and in what classroom. I just showed up and I looked like a student. I was only 5 years out of business school myself. I sat in the back of the classroom. He didn't notice me or anything and I learned for the couple hours he was teaching that day.

Then I went up to him after class. I introduced myself and confessed that I wasn't a student but that I was a big fan of his. I'd read his book. I'm watching my own little hedge fund. Would he mind if I sat in on the rest of the semester?

He got a very uncomfortable look on his face, because it's against Columbia Business School policy to let just random right come sit in on their classes. He said, I'm not supposed to do this, but if you promise to keep quiet-- like, you can't participate in any of the discussions like a regular student. If you just want to sit there and keep quiet, I'll look the other way. I did and that was an incredible investing education, because this was the absolute very peak of the internet bubble was March 10th of 2000.

I was taking his class that week. He was preaching the gospel of special situations. It's hard for young people today who didn't live through it to understand anything that wasn't nifty 50 internet-related, then, was incredibly cheap. Good industrial businesses trading at 3 or 4 times earnings.

I got lucky on the timing. I'd been buying it. I'd owned it since I started my fund a year earlier. I bought a little more on the way down. I wasn't perfect on the timing, but the day I really backed up the truck on it happened to be just coincidentally the final day of the NASDAQ blowoff to the upside and not coincidentally, because money was coming out of value stocks to go into astroturf.com or whatever and was the day Berkshire bottomed.

Within 2 months, Berkshire was up 50% and that was a 30% position for me. That's a combination of being lucky but also being good and having some courage and being willing to take a big bet early in my career, because one of the things I tell young people who are trying to bootstrap a fund like I was is, you have to look for a couple opportunities to take some risk to deliver some outsized returns, because otherwise, you're going to be stuck in the small fund trap.

The vast majority of funds that start with $1 million out of their bedroom like I did-- the vast majority never even get to $10 million. That's just not a viable business. I got lucky in that the market offered me an opportunity to put 30% of my fund into something that was both super safe and super cheap.

The dilemma today is, you can take a big bet and put 30% of your fund into Bitcoin or something. Chances are you're going to get clobbered. There was some luck there early in my career. I made the pivot away from being a Nifty 50 big cap popular momentum stock investor into small cap value stuff, very obscure little businesses, universal stainless steel, a little company called Aon.

I can't even remember-- Imperial Parking-- these obscure little companies that were super cheap and beaten down. I could see big picture, the large cap growth was trading at a valuation premium relative to small cap value. Just the sectors were trading at-- I don't know-- 20 or 30-year gap in terms of valuation. I had ridden the big cap, large cap growth stocks for a few years mostly out of ignorance, not because I said, hey, I know these are really overvalued, but momentum is momentum and I'm just going to ride it. Even that I would've had some respect for. I didn't even have the good sense to do that.

It was a very deliberate decision over the course of roughly 2000 and 2001 is, is, I got Warren Buffett value investing religion and I thank Bill Ackman and Joel Greenblatt and some other real value investors who helped teach me. It was in the nick of time and so I got into the cheapest, most beaten down sector at the right time.

As the internet bubble burst, and the market was crapping out in 2000, 2001 into 2002, I was in a sector that did pretty well. I started putting up pretty good numbers. I was beating the market every year and I picked up a writing gig at the Motley Fool. That website had a lot of traffic and was riding the AOL Iomega internet bubble.

Then when that burst, there was basically nobody over there that had much credibility, because they had been giving advice that incinerated all of their readers. Then there was me and I'd been pounding the table for over the course of dozens of articles. I was writing, at least, 1 article a week-- sometimes 2 or 3 a week and with a pretty consistent message-- listen to Warren Buffett, buy Berkshire Hathaway. The internet is a bubble, get out of these overvalued tech stocks.

To this day, 20 years later, still a great company. The stock has not reached the peak that it hit 20 years ago. Meanwhile, Apple-- and this is after Steve Jobs had come back in sitting on a big pile of cash, basically not losing money but wasn't making any money yet. You had Steve Jobs and the Apple brand, a lot of loyal customers, and a big pile of cash.

You had a clean balance sheet. Apple was trading-- if I recall, it had something like a $3 billion enterprise value-- $3 billion for a company today that's about $1 trillion, right? I said, I'm not arguing that Apple is as good a company as Cisco. What I'm arguing is, is that Apple the stock at three times earnings is a better buy than Cisco stock at 150 times earnings.

That was the message out there. As the internet bubble burst, the Motley Fool promoted me to one of their highest profile writing positions called Fool on the Hill. I was the Fool on the Hill every week and so that really got my name out there and helped me build my business combined with the good numbers I was putting up.

My fund grew and grew. Basically for the next 10 years or so up through the housing crisis and all, I was consistently beating the margin. I think 10 of my first 12 market, I should say-- 10 of the first 12 years I was ahead of the S&P. Money was coming in. I nailed the internet bubble. I later nailed the housing bubble-- ended up on 60 Minutes. It was a piece on the housing crisis that ended up winning an Emmy. I was the featured guy who predicted it.